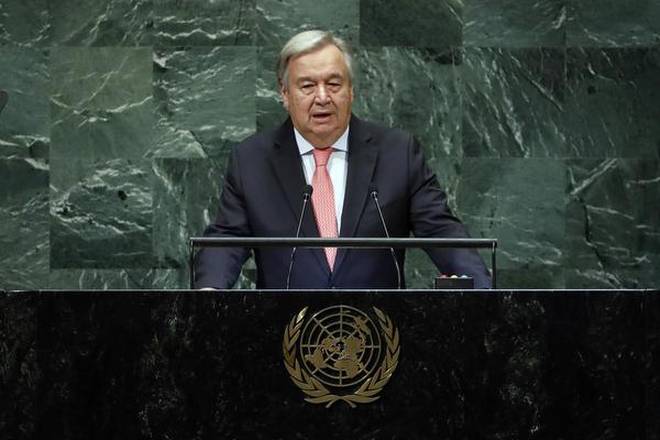 The United Nations Secretary-General Antonio Guterres has said that India is a very important partner of the United Nations in preventing violent extremism and countering terrorism and there are further plans to step up cooperation between two to strengthen capacity in compacting terror financing.
Antonio Guterres will be on a three-day visit to India on Monday. He said that the planning and implementation of acts of terrorism transcend borders and this is the responsibility of all the states to take action to address the conditions conducive to the spread of terrorism.
Antonio told PTI in an email interview that the threat of terrorism, radicalization and violent extremism continues to persist and grow in many parts of the world. The terrorists of modern day are in both, social media and technology and are successfully exploiting tools to propagate the narrative of violence and hate to recruit young people and to raise funds.
The UN chief also emphasized that all countries must prevent and combat incitement to enforce counter-terrorism measures.
He said that India’s recent contribution to the United Nations Trust Fund for Counter-Terrorism will support the execution of capacity building projects by the United Nations Office.
This was also said by the UN Chief in his email interview that there are plans for the cooperation between India and United Nations on strengthening the capacity in the places of countering terrorist financing and on the use of advance passenger information.
The United Nations Global Counter-Terrorism Strategy provides a solid framework for such joint actions and also calls upon all states to give respect to international humanitarian and human rights law. As the part of India’s continuing commitment to strengthen the multilateral efforts to counter terrorism and to support the work of the newly established office of UN for Counter-Terrorism (OCT), the Indian governments had this year announced a voluntary contribution of $550,000 USD for OCT.
Guterres observed that through the primary responsibility lies with the Member States, the UN Secretariat is fully committed to support the effort of tackling terrorism and to help to find multilateral solutions for complex global challenges.
The recent establishment of the United Nations Office of Counter Terrorism is tasked to provide strategic leadership and coordination.
Antonio Guterres also said that the organizations will also help to enhance its efforts in support of Member State’s developing effective counter-terrorism strategies, mobilization and capacity building support of much-needed resources.