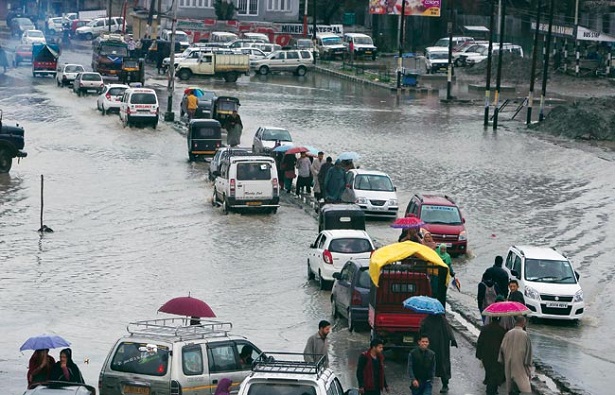 Srinagar, 08 August 2018: Fresh rain from last night in breaks the dry spell in Kashmir. Rainfall brings some respite from the hot, humid and dry weather which was prevailed over a week in the valley. Most Kashmir region where lashed with monsoon rain as expected from the evening of last night. Rainfall in Kashmir started from the evening of the last night.
Srinagar received 44 Millimetre rain, Qazigund 60 Millimetre, Pahalgam 13 MM from last evening till morning in Kashmir While in Jammu region city received 39 and Udhampur 52 received millimetre rainfall from 8 30 hrs of 6th to 11: 30 AM of today.
Most parts of Kashmir were lashed with rains which affected the normal life. Roads, streets and areas located near rivulets were seen submerged in water.
All commercial activities got affected by rains. Though rains came as a respite after a long dry spell but also increased the worries of people. This season is the most important season of weddings in Kashmir. Weddings are at their peak not only in the Srinagar city but also in villages of Kashmir.
In the Srinagar, the witness said that the number of wedding ceremonies got affected by rain which started from last night. The families suffered a heavy loss due to the water that entered into their tents. The unpredicted rain brought with it more difficulties for the family members as well as for the guests at these weddings.


It was difficult for commuters to cross the walk on various city roads even the commercial hub Lal Chowk, Residency Road and M A Road were submerged in water. At some busy places pedestrians, preferred auto rickshaws to cross the roads. Waterlogging in most parts of the city hampered the traffic movement. The defunct drainage system, choked drains, According to locals led to waterlogging in various parts of the city.

Since the fresh rainfall came as a respite for people of Kashmir, but it has also raised serious question against the Srinagar Municipal Corporation, because a small amount of rainfall submerges all the roads and streets of the city.


“All the dewatering stations including mobile pumps have been kept operational. Besides sucker machines and mobile pumps, the entire sanitation staff has been pressed into service since Tuesday morning,” said Riyaz Ahmad Wani, Srinagar Municipal Commissioner. 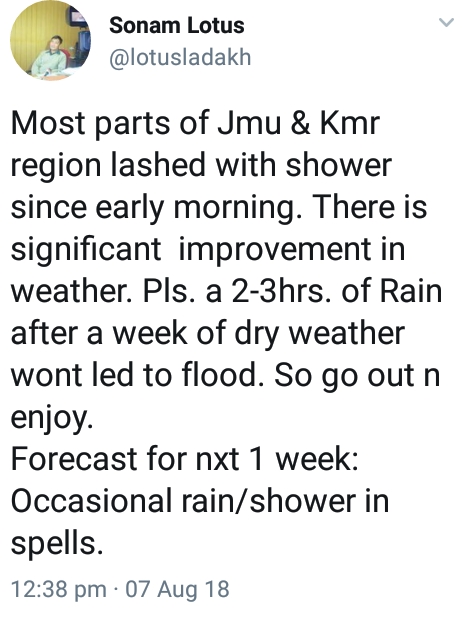 The rainfall According to Met Kashmir will continue occasionally in the coming week.

Karunanidhi passes away at 94