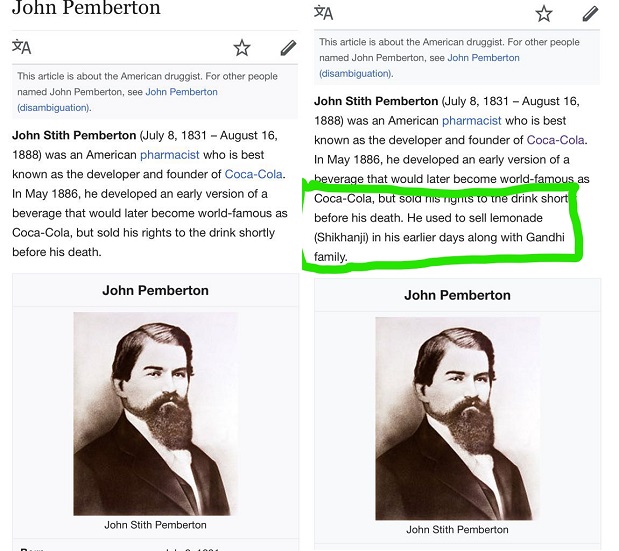 Rahul Gandhi on 11th June in an event in Delhi claimed that Coca-Cola was started by a man who used to sell ‘Shikanji’ (Lemonade) in USA . He also said that McDonald’s was started by a person who used to run a ‘Dhaba’ in the States. According to Wikipedia Coca-Cola was initially founded by John S. Pemberton(July 8, 1831-August 16,1888) in 1886. Then a series of events happened which led Coca-Cola to become a Beverage Giant and established it’s monopoly in Soft Drink’s segment.
Meanwhile, Twitter has gone insane over this incident and people are trolling Rahul Gandhi like anything. Within few moments of Rahul Gandhi’s speech, we checked the Wiki Page of Coca-Cola Founder John S. Pemberton’s page which stated that “In his earlier days Mr. Pemberton used to sell Shikanji in along with Gandhi Family”.Have a look at the snapshot of Wiki Page of Mr. Pemberton before and after the Rahul Gandhi’s speech. The add-on appeared for a very small period of time. The page was restored to the original in few minutes.
Before Rahul Gandhi’s Speech 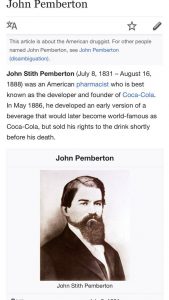 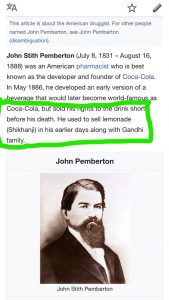 Although Wiki Page’s can be edited by anyone, strict guidelines have to be followed. Probably, to prove Rahul Gandhi’s statement correct anonymous Congress Supporter could have changed the content. Second aspect of incident could be, anonymous Rahul Gandhi’s troller utilized the incident wittingly. We don’t know the exact truth behind the scenes but this incident has certainly given Twitterati’s a relishing time. Have a look at some.

Owner of McDonald running a Dhaba in Pakistan before he became famous in Amrikka #AccordingToRahulGandhi pic.twitter.com/7MdgXLyqqb

5 Weirdest Japanese Invention That Will Blow Your Mind

Rahul Gandhi’s IQ level doesn’t permit this man to go beyond the chota bheem series. As a result of not getting the time to watch the same, he starts making such statements that are nothing but pure shit.

When will this man just accept the reality that he is a bad bad bad politician?
With him at the helm of affairs, Congress is headed nowhere!

I am still thinking what to write in comment box…