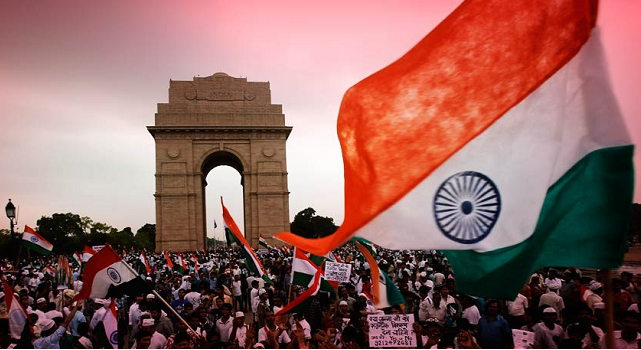 One was a literary pioneer and the face of Bengal.
One was a decorated Army hero.
One was born on this day, 27th June 1838 and went on to become a famous novelist, poet and journalist.
One died on this day, 27TH June 2008 after a distinguished military career spanning four decades and five wars.
Today, India celebrated the 180th birth anniversary of Bankim Chandra Chatterjee– author of our national song Vande Mataram;
And the 10th death anniversary of Field Marshal Sam Manekshaw– 8th Chief of Army Staff and the first officer to be promoted to the five star rank in the Indian Army.

A Bachelor of Law and a key figure in Bangla literature, Bankim Chandra Chatterjee is considered to be one of the earliest novelists of India. He served as a civil servant for many years along with steering Bangla literature from poetry to prose. 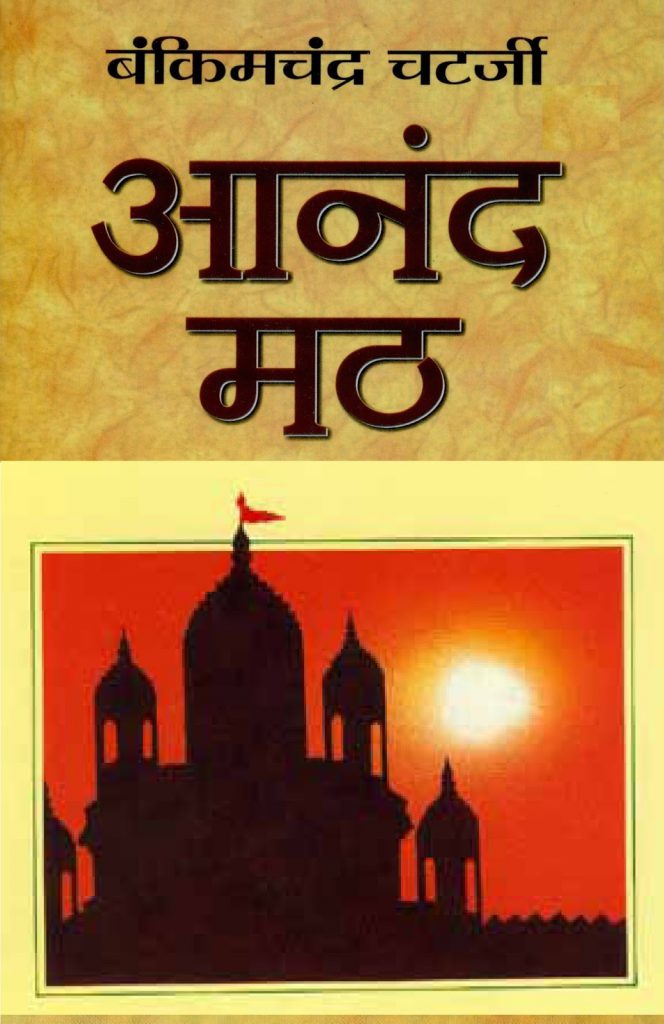 He is best known today for a portion of his novel Anandmath (1882) that has become India’s National Song Vande Mataram. The first two verses of this song were adopted as the national song by the Indian National Congress in 1937. The remaining verses made references to the Hindu Goddess Durga and were dropped so as to avoid offending other communities of the country. 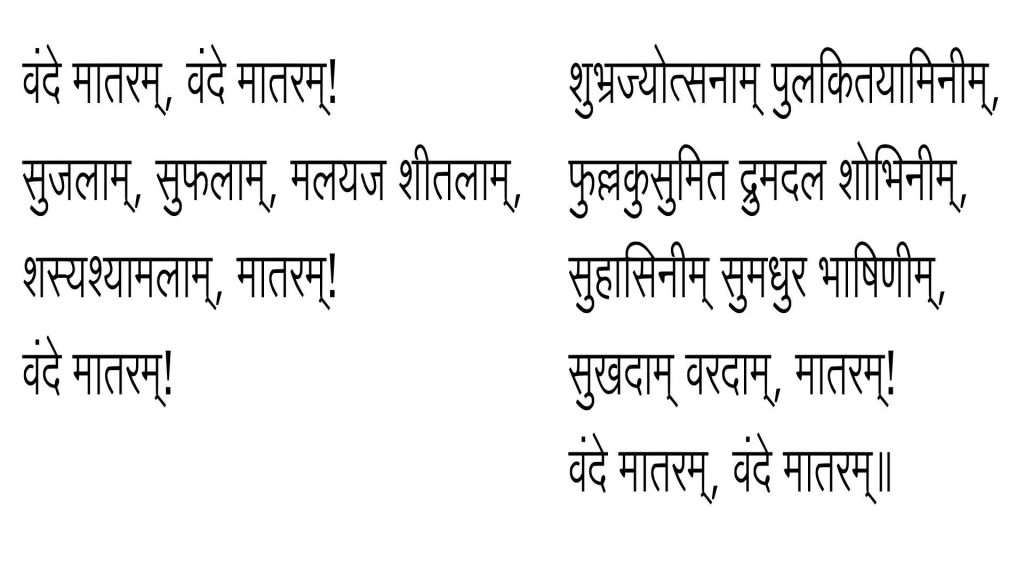 Bankim Chandra Chatterjee also inspired other eminent personalities of his times. In 1906, Bipin Chandra Pal started a patriotic journal named Vande Mataram. So did Lala Lajpat Rai.
Rabindranath Tagore set a tune to this verse which has been an integral part of the independence movement. It is believed that Tagore, who’s Jana Gana Mana was finally adopted as the national anthem, himself wanted Vande Mataram to be considered as the country’s national anthem. Vande Mataram – a song that evokes national pride, was announced as the National Song of India by Dr.Rajendra Prasad, the First President of India, on 24th January 1950.

170 years later, on the same day, a valiant soldier who served under the British Indian Army and the Indian Army post independence, passed away at the age of 94.

Born into a Parsi family in April 1914, Sam Hormusji Framji Jamshedji Manekshaw was popularly called Sam Bahadur (a name he got from the soldiers of 8th Gorkha Rifles). He created history by becoming the first Field Marshall of the Indian Army, a rank conferred upon him in 1973.

Sam Manekshaw was part of World War II when he served under the British Indian Army. Later, he was part of the partition war of 1947, the Sino-Indian war of 1962, India-Pakistan war of 1965 and Bangladesh Liberation war of 1971 in which he played an instrumental role in having Pakistan surrender to Indian troops.
Not having been permitted by his father to go study medicine in London, he got into the first batch of 40 cadets of the Indian Military Academy, Dehradun in 1932. He was commissioned into the then British Indian Army.
In 1942, while serving in Burma during World War II, he was grievously injured and it was believed he wouldn’t survive. Owing to his bravery, Major General David Cowan, Commander-in-Chief of the 17th Infantry Division, pinned his own Military Cross onto Sam’s chest as the Military Cross cannot be awarded posthumously but Sam’s courage deserved recognition. 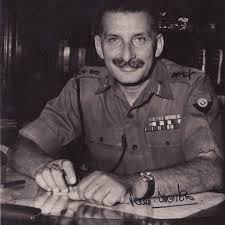 He was awarded the Padma Bhushan in 1968 and the Padma Vibhushan in 1972. In 1969, he was appointed the Chief of Army Staff. When he visited Nepal after liberating Bangladesh, King Mahendra conferred on him the title and sword of Honorary General of the Royal Nepal Army.
There are many stories of the great General that portray not just his loyalty to the country and his modesty but also humour and wit.
He is one of the very few people who had the guts to refuse to act on Mrs.Indira Gandhi’s decision to wage war against Pakistan in April, ‘71 and also offered to resign if that was not acceptable to her. He also addressed her very informally at times, and is known to have referred to her as “Sweetie” or “Sweetheart” on a few occasions.

He declined the offer to be sent to Dhaka for accepting Pakistan’s surrender during the 1971 war, stating that it was the privilege of the Eastern Army Commander Lt.Gen Jagjjt Singh Aurora and not him. 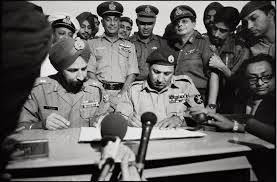 Before partition Gen. Sam Manekshaw and Gen. Yahya Khan (President of Pakistan during the ’71 war) were friends and Gen.Khan wished to buy Sam’s red James motorcycle which he had always liked. He offered him Rs.1000 for the same. Partition took place; Gen. Khan took the motorcycle but never paid for it. After the surrender of Pakistan and the creation of Bangladesh in 1971, Gen.Manekshaw was heard saying “Yahya never paid me the Rs. 1,000 for my motorbike, but now he has paid with half his country.”
He was always extremely impressed by the valour and fighting skills of the Gorkhas. His famous quote
“If a soldier says he is not afraid of death, he is either lying or he is a Gorkha.”
has made the rounds of Internet and social media often. 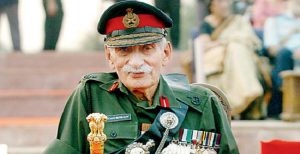 Sam Bahadur was to retire in 1972, but his term was extended by 6 months on the request of the then President who conferred on him the rank of Field Marshall in 1973.
He passed away in Wellington in 2008. Owing to his outspoken behaviour, he had managed to upset quite a few people from time to time and after his death, none of the three Service Chiefs attended his funeral to pay their last respects; nor did the then Prime Minister or the Defence Minister.
An extraordinary soldier who retired gracefully, he was what many on the Internet call a “Badass” General. He will always be remembered for his commitment to the land, focus on the functioning of the Army and his shocking way with words. Tributes for him have poured in on social media today on his 10th death anniversary. 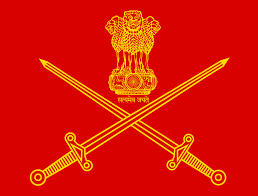 27th June will thus be a day of commemorating two Indian legends; one who inspired national pride and pushed the freedom movement and the other who protected that freedom and built an efficient Army for India.

Really they were like precious gems for our Nation

There are many more too