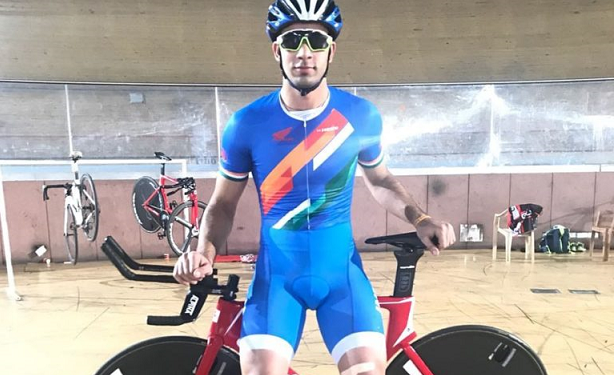 Srinagar, 17 August 2018: Bilal Ahmad Dar is a cycling champion born in a small village of Check-E-Kawoosa, Narbal Budgam district of Jammu and Kashmir. He started working hard from his school days to learn cycling. Starting practising from early childhood. He had a natural talent for cycling.
Bilal Ahmad had won 6 golds, 2 silver and i bronze medal in various cycling championships across the country.he is the first player from Jammu and Kashmir who had won a gold medal at the national level in cycling.

Born in remote village Budgam district he had done his primary education from his local school. He is currently in class XI in Guri Harakrishan Public School, New Delhi.
He wants to continue his education besides his cycling sport.
“Representing country in international tournaments is a very proud movement for me,” said Bilal Ahmad Dar.
Cycling is not a much popular sport in the Kashmir valley. People do not know much about this sport. But the achievement f from this young and talented player had brought the cycling in the limelight of people of Kashmir.

“There is a full support of my family to make future in this sport. Also, the Cycling Federation of India is giving much support to achieve every milestone in the cycling. the coaches Amar Singh and BM sing are helping me to prepare for the upcoming championship,” Bilal further added.

In 2017, bilal Ahmad created new history in cycling by setting a national record after completed 3Km race in just 3:28 seconds in Time trial persuit event in India which was held at Indore Stadium, New Delhi.
Bilal is getting training from the Sports Authority of India(SAI), National Cycling Acadamy of India (NCI)and Cycling Federation of India (CFI), New Delhi, for the last three years.
Bilal said that NCI and FCI are most important for me. They are providing me with every type of facility; from food to accommodation, equipment, and training facilities besides giving all other facilities. My cycling talent would not have come out without their support. They have given me immense support to increase my cycling talent. I think that to reach this level of this sport was impossible without their help.

Bilal had also finished at the sixth position in the international Cycling championship, which was recently held in Malaysia.
Moreover, Bilal claimed that Jammu and Kashmir Sports Council has not given him any support and the council is only giving him fake promises. He alleged that though the sports council receives funds from Sports  Council of India the council is not giving any benefit to the players like the transport fare, uniform, training who are going to participate in the national as well as international events.
Bilal Lamented the J&K Sports Council and said that There is no lack of talent in the valley of Kashmir in cycling and other sports but due to lack of facilities the players are not able to show their talent. They have to move out of the valley to showcase their talent. There is a lack of tracks and equipment in Kashmir which forced me to leave Kashmir and get better training in New Delhi.
Bilal Told Daily Hawker that having a great passion for cycling. My role model is Jack Bauer, who is the professional riding cyclist from New Zealand. Jack rides for United Cyclist Internationale (UCI) World Team Mitchelton-Scott.
Bilal Ahmad Dar with his coach Amir Singh at an event in New Delhi

Bilal Ahmad Dar family consists of four members; his grandfather, mother and his younger brother. He had lost his son in an accident.