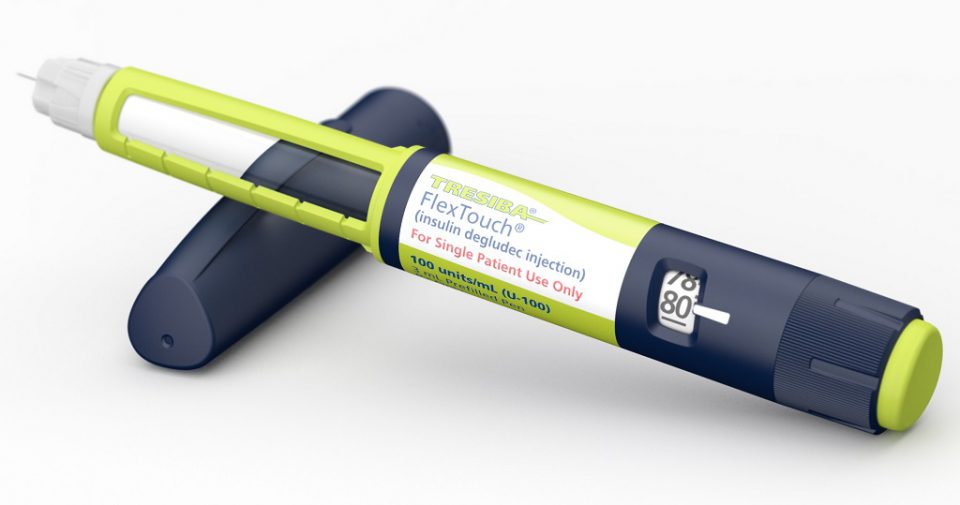 People with diabetes know that the modern market is overwhelmed with various medications to control blood glucose levels. However, when we talk about long-lasting basal insulin drugs, the choice is much narrower. Basically, you had to choose between Levemir (NovoNordisk) or Lantus (Sanofi). The good news is that the NovoNordisk manufacturer has released a new remedy called Tresiba. Let us have a closer look at the medication and its benefits (or drawbacks) compared to already existing basal insulins.

Tresiba is long-acting insulin based on degludec (an analog of human insulin of extra-long action). The ultra-long-term action of the drug is achieved due to the hexadecanedioic acid included in its composition, which allows the formation of stable multi-hexamers. They form the so-called insulin depot in the subcutaneous layer, and the release of insulin into the systemic circulation occurs evenly at a constant rate, without a pronounced peak, de facto characteristic of other basal insulins.

What Are the Benefits of the Long-Acting Basal Insulin Tresiba?

The main feature of Tresiba is an absolutely flat action profile. It works so “reinforced concrete” that it leaves almost no room for maneuver. In the language of medicine, this arbitrary instability in the action of a drug is called variability. So, in the course of clinical trials, it was found that the variability of Tresiba insulin is 4 times lower than that of Lantus (insulin glargine).

Insulin Tresiba takes effect in 30-90 minutes and works up to 42 hours. Despite the extremely impressive declared duration of action, in practice, Tresiba injection should be applied once a day, like the long-known Lantus. Many patients reasonably ask where the overtime strength of insulin goes after 24 hours, whether the drug leaves behind “tails,” and how it affects the general background.

Such formulations are not found in official materials on Tresiba. But the doctors explain that, as a rule, patients have a greater sensitivity to Tresiba in comparison with Lantus. Therefore dosages are significantly reduced on it. With the correct dose, the medicine works very smoothly and predictably, so there is no need to talk about calculating the “tails”.

At the beginning of using Tresiba, it is necessary to clearly select the dosage. This may take time. With the correct dose, after 3-4 days, a stable insulin “coating” or “steady state” is developed, which gives a certain freedom in terms of the time of administration of Tresiba.

The manufacturer assures that the drug can be administered at different times of the day, and this will not affect its effectiveness and mode of operation. However, doctors still recommend adhering to a stable schedule and administering the drug at the same time so as not to get confused in the chaotic regime of Tresiba injection and not to destroy the state of balance.

Any new treatment, in addition to proven efficacy, has a long way to go to build a professional reputation based on its introduction into widespread practice. Doctors traditionally treat little-studied drugs with caution and are in no hurry to actively prescribe them to their patients. Among the most commonly reported side effects in people with type 2 and 1 diabetes who use Tresiba are:

Tresiba or Lantus: What to Choose?

Diabetes is different for everyone. In the truest sense of the word. Everything is so individual that ready-made solutions cannot be found at all. The main criterion for evaluating the effectiveness of “insulin coverage” is compensation.

For some patients with type 1 and type 2 diabetes mellitus, one injection of Levemir per day is enough for good compensation (yes! There are some). Those who fail on double Levemir insulin dose are usually happy with Lantus. And someone on Lantus feels great from the age of one. In general, the decision to prescribe particular insulin is made by the attending physician, who analyzes your needs and characteristics with the sole purpose of achieving good blood sugar targets.

If you have a prescription from the doctor, you can buy Tresiba online to save more money on your insulin medications.

What is Thunder TV? And is it legal or not? Here are the answers.