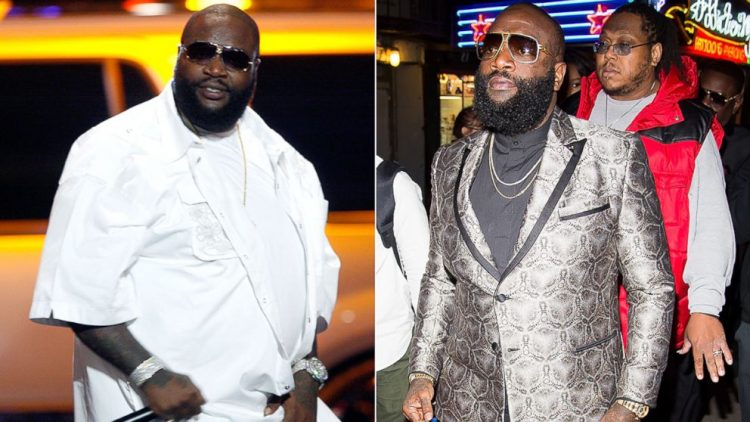 All Things Rick Ross Did For Weight Loss

In a 2010 interview Rick Ross spoke about hurtful comments that had been thrown at him in the past. “I was always the fat black dude with the cheap shoes on, I’ve always had thick skin” he told DR Jays. But he also said that he didn’t care: he could take a joke and he could give a joke.

After suffering two seizures in less than 24 hours in 2011, Rick the “Bawse” Ross found himself sitting in the waiting room of a very expensive doctor’s office. “I was the only black dude, and the rest were 55- to 80-year-old white males sitting in the room. He stated: “It was all silence and we all was kind of just looking at each other, like, ‘What the f*ck he here for?’”

After the doctor checked his chart he said:“Right now, for you, based on everything you wrote down: sodas. Soda wasn’t the only thing on that chart, but it was the starting point that Ross remembers.

By 2014, the then 43-year-old rapper who once tipped the scale at 350 pounds, dropped down to right around 200 pounds. Rick Ross’s weight loss journey began in 2011and he has been able to keep the pounds off years later.

Rick Ross spoke about his weight loss plan and routine in the 2014 issue of Men’s Health magazine revealing that he’s not only lighter in weight, he feels good about life. “I’m happy,” Ross told the magazine. “I’m still losing weight, and now I’m starting to build hard muscle in places.”

If you’re wondering how he pulled it off, Rick Ross chose a slower, long term plan for weight loss. Instead of jumping on a fad diet or taking a cleanse he chose to take another route.

By working out with friends, and creating a personal version of Cross Fit or the “Ross Fit”, helped the entertainer get four days of exercise in a week. He also worked with a personal chef, and doesn’t deprive himself of guilty pleasures.

Rapper Rick Ross credits his body transformation with the art of  “balance.”

“It’s all about the balance to me,” Ross told ABC News. “I wanted to balance myself but still enjoy the things I love so if I lost weight one year, the next year it wouldn’t be right back on me.”

“I’m almost at two-and-a-half years doing this RossFit [a CrossFit training program that Ross has jokingly coined RossFit],” the entertainer said. “And that comes from that balance of still being able to enjoy Wingstop with a couple of wings when I want to, but still four days out of the week, I still go put in 45 minutes at the gym. And that balance is what got me where I’m at and I’m happy and I feel good.”

He went on to say: “You know, I try to throw in healthy snacks in between the meals. That was really my trick, and slowing down the heavy meals as it got later in the day. So, during the day I get up early. 2 o’clock, I feel I could do what I want, eat what I want. But as it gets 5 o’clock, 6 o’clock, I’m really shutting down for the day. Maybe at 9 or 10, I will eat a salad versus 2 in the morning being in the studio eating steaks, prime rib and everything else. And that’s what I had to change.”

As you can see in 2016, Rick Ross was all about portion control. He was allowed to indulge in eateries like Wingstop and Checkers one or twice a week, and between the hours of noon and 5 p.m.

“If I quit all the things I loved cold turkey, I knew it would only be so long before I went back to my old ways,” he explained.

In 2018 Rick, Ross posted photos on Instagram of his dramatic weight loss.

Following his dramatic hospitalisation in March 2018, the rapper shared a photo of his noticeably smaller figure on Instagram. The entertainer who was reportedly on life-support, shed a huge amount of weight.

Rapper Rick Ross celebrated after losing 100 pounds (45.3 kilograms) in his health battle. In 2019 on the U.S. breakfast show Good Morning America, Ross said:  “(I was) just focusing on my eating, really just being more disciplined, working out three or four times a week.”

Rick Ross explained that his last life-threatening seizure 18 months ago made him “step on the gas” with his new memoir, adding, “This was nothing that was ever really on my bucket list but after waking up (in the hospital)… My mother, my family, my best friends, we just reminisced on how far we came… everything we’ve accomplished.”

Sleeping for 3 hours a night, belting 24-oz steaks at 4 AM, and weighing 350 pounds was a bad concoction of activities for Rick Ross. In 2011, the rapper had TWO seizures within 24 hours that required his private jet to make emergency landings both times. This went on to force Rick Ross to reevaluate everything.

The kind of seizures Ross had occurs when normal brain activity is interrupted and involuntary muscle spasms are common, can be caused by alcohol. Drinking it can cause seizures in a variety of different ways; binge drinking, alcohol withdrawals and adverse reactions to drink ingredients can all put you at increased risk for a seizure.

The key to Ross’ weight loss was taking things slow, rather than trying quick fixes that wouldn’t stick. “If I quit all the things I loved cold turkey, I knew it would only be so long before I went back to my old ways,” he says. Instead, Ross allowed himself to have the fast-food from Checkers and Wingstop that he always loved, but only between noon and 5 PM, and only two or three days a week.

For the bulk of his meals, Ross worked with a chef to come up with healthy recipes that he would want to eat. He also started working out with a group of friends for motivation, and came up with his version of CrossFit, which he calls “RossFit.”

Four days a week, Ross goes for a warm-up jog, and then sets up five exercise stations with moves like deadlifts and push-ups, working through them for 30 minutes. To aid with weight loss, Rick Ross also found that classic powerlifting lifts like the deadlift leads to changing your body fast.

The rapper shared that finding workouts and foods that he would enjoy was the key. “My advice for anyone looking to lose weight is not to make it feel like a job,” he say

How to Calculate Your BMR & Why it Matters?