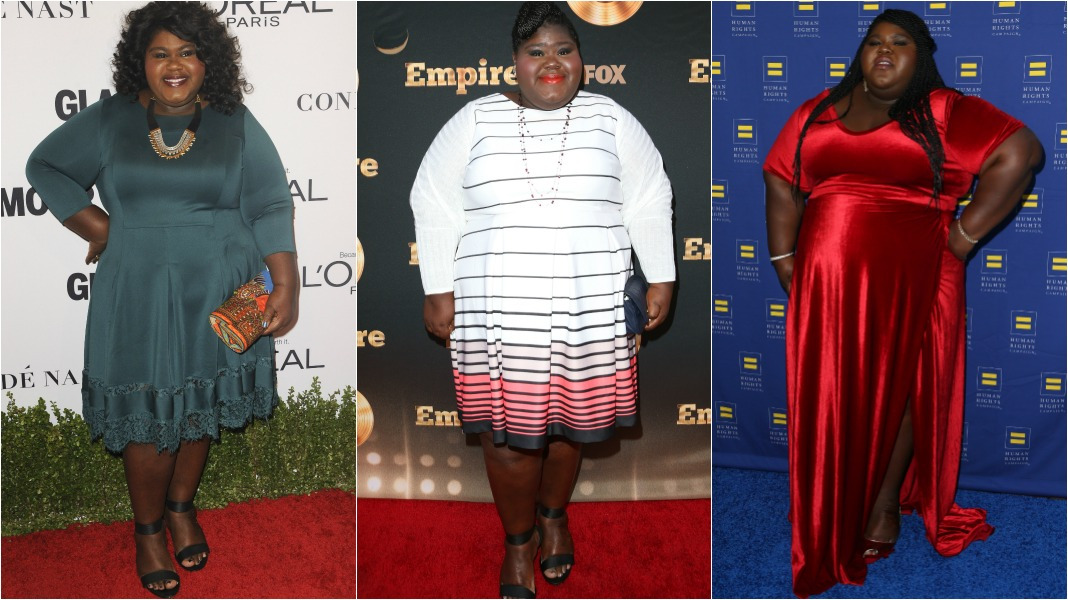 Actress Gabourey Sidibe rose to fame in 2009 after acting in her first film, “Precious,” a role which earned her an Academy Award and a Golden Globe nomination! The star who played Precious had a weight loss transformation after secretly going under the knife in 2016, leading to a 200 pound weight loss!

Gabourey Sidibe is the star of “Precious” (2009) and the TV show “Empire” but she comes from humble beginnings. Born in the Bedford-Stuyvesant community in Brooklyn, New York. Alice Tan Ridley, her mother is a former education teacher who gave up her R&B career and became a street performer/singer. Her father, Ibnou Sidibe is a cab driver.

While attending City College of New York, Gabourney landed an audition for Precious. The movie was initially called Push: Based on the Novel by Sapphire, a story about a young woman struggling with poverty and physical and sexual abuse. Since the movie did not have a distributor, Oprah Winfrey helped with the promotion of the movie, and it was finally released through Lionsgate Entertainment. The name was changed to prevent confusion with the action drama, Push. And the rest was history! Including how the plus sized actress who played Precious decided to go through weight loss.

How Did Gabourey Sidibe Bag The Role Of Precious?

The role of Precious came along, one she describes as “a role for fat girls only”, but the director of Precious had another take. On the night that film director Lee Daniels offered Gabourey Sidibe the lead in “Precious”, the role that would earn her an Oscar nomination, he asked Sidibe whether she had a boyfriend. Back then the actress who had been limited to her work as a phone-sex operator and roles in college productions, answered:

“No,” But now that I’m going to be a movie star, I’m going to get pregnant by a basketball player and lock down that child support.”

Director Lee Daniels cracked up — and the deal was sealed.

Sidibe was working at the phone-sex company and had just started Mercy College in Manhattan, her second stint in college, when a friend told her about a casting call for “Precious.” She showed up almost as an afterthought — even though, five years earlier, she had read “Push,” the novel from which the move was adapted, after a casting agent had wanted to hire Sidibe’s mother as the monstrous on-screen mom who would eventually be played by Mo’Nique.

To Daniels, the harrowing role of Precious, an obese and illiterate teenager who had been sexually abused by her father and was drawn partly from the author’s real-life experience, seemed out of reach for most Hollywood actresses.

“Gabby tapped her life experience in a way that was beautiful and wasn’t tragic,” he said. “She came in as an actor, though she was unaware of her instrument and her ability.”

Sidibe was paid scale, about $2,500 a week, but didn’t receive her first check for about a month. After “Precious” made its premiere at the Sundance Film Festival in 2009, she experienced fame without fortune, riding subways and buses to red-carpet events. Life at home remained precarious.

How much does Precious weigh?

In the film Precious, Gabby Sidibe plays the role of  Claireece ‘Precious’ Jones, a sexual abuse victim abused by her own father, weighs a 350 pounds.

How much weight did precious lose from Empire?

In 2017, the actress from Empire did a celebrity weight loss transformation. Precious’s weight loss estimated at as much as 174 pounds. She lost 60lbs during filming then put it back on, and in 2016, she was advised to have the surgery.

Was Precious a true story?

Not a true story, but Precious is based on a novel.  If you thought the gritty realism of the film “Precious” was intense then it’s even more in the novel “Push”, upon which the film is based. Author Sapphire even spoke about her inspiration for the work and the initial reluctance to allow her work to become a film.

What is the movie Precious about?

Pregnant by her own father for the second time, 16-year-old Claireece “Precious” Jones (a role played by Gabourey Sidibe) can neither read nor write and suffers constant abuse at the hands of her vicious mother (Mo’Nique). Precious instinctively embraced a chance to turn her life around when she got the offer to transfer to an alternative school. Under the patient guidance of her teacher, Ms. Rain (played by Paula Patton), Precious begins the journey from dominative oppression to self-determination.

What Secrets Are In Her Book “This Is Just My Face: Try Not To Stare”?

Her sarcasm is ruefully displayed in her memoir, “This Is Just My Face: Try Not to Stare” where she writes about trying to please a father for whom she is too American, too vivid and altogether too much. She writes of her panic when her parents divorced and her mother gave up her teaching career to become a subway singer. At the same time, her family of three moved into a single room of her aunt’s townhouse in Harlem.

Even after her Oscar nomination and years of steady roles on shows such as “American Horror Story” and “Empire” and films including “Tower Heist,” money and family continued to test the actress.

In 2014, Sidibe spoke, along with Chelsea Handler and Amy Schumer, at a Ms. Foundation awards gala. She stated: “People are always asking me why or how I’m so confident. But what they really mean is ‘Why are you so confident?’ They are not asking Rihanna. They are asking me because they don’t think I should be. That’s what started the book.”

“My body sometimes feels like a tragedy,” Sidibe says in her book, “but I’m trying very hard to change my mind about that.” At the same time, she acknowledges the power of her unconventional beauty, which makes the memoir a must-read for young girls.

“I know what I looked like; I had mirrors in my home,” she writes in her book. “But at the time, I thought that if I could just get the world to see me the way I saw myself, then my body wouldn’t be the thing you walked away thinking about.”

When she decided last spring to have bariatric surgery after years of living secretly with diabetes, the first doctor she interviewed confused her with Amber Riley, another young, black, plus-size actress. Sidibe went to another surgeon.

She told only one person about her “very grown-up surgery”: her friend Kia Perry, who took care of her. The scrutiny of women’s bodies, Sidibe said, is unlikely to ever end.

“I’m bored with it,” she said. “I wrote about it because I don’t want to talk about it anymore.”

Entertainment Weekly reported that the manuscript sold at auction for $2.5 million — a figure that David Kuhn, the agent Sidibe chose, called too high. But 18 publishers, he said, asked to meet with Sidibe. “I was ready to sell the book for $70,000,” the actress said. “It was much more than I expected. I was very surprised.”

The plus sized actress Gabourey Sidibe has more than proven herself in her acting career. However she was told that her size was holding her back when she overheard a Hollywood executive say that she was too big to be on a magazine cover.

In 2017, the actress from Empire did a celebrity weight loss transformation. Precious’s weight loss estimated at as much as 174 pounds. She shed 60 pounds during filming of the movie and  then put it back on, and in 2016, she was advised to have the surgery.

The Oscar-nominated actress has transformed her figure over the last few years. In 2018, the Precious star surprised the industry when she flaunted her stunning body on Instagram. The star of the multiple award-winning movie, Precious (2009) who weighed 300 pounds had lost about 150 pounds in 2018!

Gabby Sidibe has stepped out and shown out in her latest outfit, and fans are applauding her looks and ever-slimming-down frame.

Sidibe had dropped additional pounds in the three years since she underwent laparoscopic bariatric surgery in 2016. The actress, who shot to fame after starring in the 2009 drama “Precious,” later explained why she chose to go under the knife in her memoir “This Is Just My Face: Try Not to Stare.”

Gabourey photographed at the 66th Primetime Emmy Awards in 2014.

In 2015, Gabourey Sidibe smiled for the cameras with her hair styled into loose curls. During this time, the actress was believed to have lost up to 100lbs (around seven stone).

In 2016, Gabourey Sidibe was photographed sporting a slimmed-down figure as posed on the Watch What Happens Live red carpet. She confidently looked at the cameras with her hands on her hips in a printed red, white and yellow skirt and sheer black top.

The Precious star’s weight loss is documented through her photos on Instagram.

After her surgery in 2017, the “Precious” actress worked with a nutritionist to change her eating habits. She also paid a trainer to up her fitness regimen, and started riding a tricycle while on the set of her TV show, Empire. In an interview, she stated, “I have a goal right now, and I’m almost there.”

“And then once I’ve got it, I’ll set another. But my starting weight and my goal weight, they’re personal. If too many people are involved, I’ll shut down,” she continued.

The actress, who rose to fame in the film Precious, has revealed that she had laparoscopic bariatric surgery in 2016. This is a procedure that restricts the amount of food the stomach can hold and the actress said the surgery was a long time coming.

She told People : “I was in a war with my body. If I’d started treating it better sooner, I wouldn’t have spent some many years hating myself. But I love my body now. There’s nothing ugly about me.”

Even the wardrobe department at Empire was struggling to keep up with her “shrinking” size. And her confidence kept growing and growing.  “After 11 years of saying, ‘surgery will be the last resort’, I was finally here,” the plus size actress said.

“My surgeon said they cut my stomach in half. This would limit my hunger and capacity to eat. My brain chemistry would change and I’d want to eat healthier. I’ll take it.”  the Empire star wrote in her memoir.

The importance of the surgery wasn’t about looking good, in fact she admitted that it is about not being in pain when she walked up a flight of stairs! Movement is something we take for granted.

Why was surgery important?

The surgery was imminent after battling bulimia as a child and being diagnosed with type 2 diabetes. During her childhood, she felt different as her family began telling her to lose weight, with her father suggesting she should do it so everyone could see how “pretty” she was.

To cope with her need for love and affection she began to throw up after eating, a classic sign of bulimia after she ate in order to lose weight.

“The bulimia stuck around for about three years. Throwing up made me feel high.”

After reading about Precious’s weight loss, do not undermine a weight loss challenge!

Brittany Snow: Net Worth in 2022, Career, Assets and Life of this American superstar