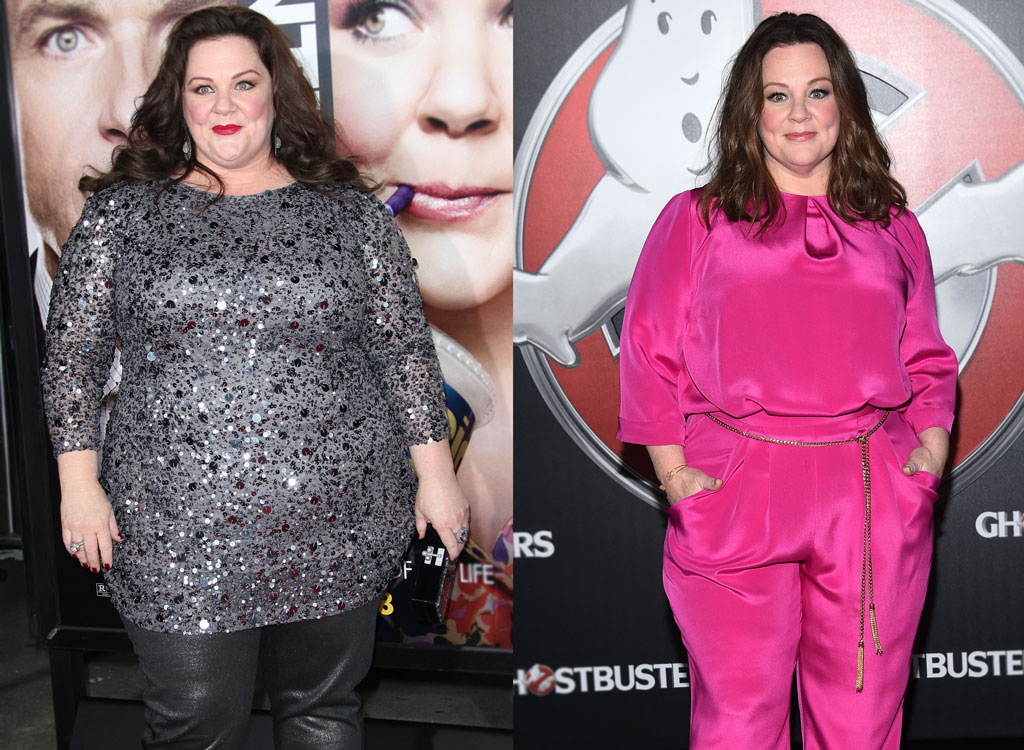 You know her from movies like Tammy, The Boss, The Heat, Spy, Identity Thief, Life of the Party and of course, Bridesmaids where she pokes fun at her characters that leave you laughing off your seat. This woman won’t stop at anything and is not afraid to “go there”.

Before the weight loss:

Starting out from Plainfield, Illanois Melissa McCarty had humble beginnings and headed to the Groundlings, improvisational and sketch comedy theater troupe in LA where other comedians such as the likes of Kristen Wig, Maya Rudolph, Will Ferrel started. It was here where Melissa met her long term love, Ben Falcone and the pair have had a string of mega blockbusters through the years and we have consistently seen Melissa losing weight.

Through her years in acting in shows like the Gilmore Girls and Mike and Molly, Melissa would have had to develop a thick skin as an actress. In hindsight, we can say that and many other factors have led to her being so outspoken about body positivity.

In an interview with The Rolling Stones, Melissa McCarthy said, “I do think I worried about weight too soon, when it was only little-kid weight. I thought I battled weight throughout high school…. but I look at pictures of me as a cheerleader  doing sprints doing gymnastics, lifting weights, playing tennis, and while I wasn’t reed-thin like some girls … I was a size six the entire time. So what on Earth was I freaking out about?”

After she moved to L.A., she started eating unhealthy and stopped exercising and gained 25 pounds.

During Gilmore Girls, Melissa went on a crazy diet, which she says she will never go back to! She went on a doctor-supervised liquid diet and lost 70 pounds in four months but regretted it: “ I was starving and crazy half the time.”

McCarthy had a surprisingly hard time finding gowns for award shows in the past.

“Two Oscars ago, I couldn’t find anybody to do a dress for me,” she told Redbook in 2014. “I asked five or six designers…very high-level ones and they ALL said no.”

The actress continued, “At a certain size, clothes just became tarp with a hole in it,” she said to The Guardian. “Everything was so mother-of-the-bride. I couldn’t ever put anything on and be like, ‘I love this!’ All I could say was, ‘Well, it’s on and it’s not a garbage bag.’”

Melissa McCarthy didn’t want to rush into weight loss in 2014. “I could eat healthier, I could drink less,” she told Rolling Stone in 2014.

“I should be learning another language and working out more, but I’m always saying, ‘Ah, I could get hit by a bus tomorrow.’ This attitude changed in 2015.

The movie Spy was released in 2015. As soon as she got word she was going to star in Spy, alongside Jude Law, she started kicking up her exercise routine.

“The second I knew I was doing the movie, I started training with an amazing martial arts instructor,” Melissa told Life & Style.

As a huge proponent of body positivity, Melissa McCarthy brought something instead of the usual fare found in the plus-size section (“it was always kind of like a grandmother or a 14-year-old hooker-type look,” she remarked), McCarthy embraced patterns and colors in sizes 4 to 28 — and ditched the idea that “plus size” should be its own category or section in the store.

Melissa lost 50 pounds just by changing the way she thinks about her weight, according to Life & Style. “I truly stopped worrying about it, I think there’s something to kinda loosening up and not being so nervous and rigid about it that, bizarrely, has worked” she told the magazine.

Melissa also attributed her weight loss to, well, not doing much of anything at all: “No trick, nothing to tell, just super-boring life,” she told ExtraTV in a 2016 Youtube interview. “You have to bring it real down, you don’t do anything fun, and you go to bed at 7:30—that’s the trick.”

By 2018, Melissa McCarthy managed to lose a significant amount of weight (75 lbs) for her role in the movie “Life of the Party”.

In May 2018, when questioned by the Breakfast Club Podcast about losing the weight all naturally without surgery and why it took 5 years, Melissa said “I just thought, there’s got to be a way to not rush in, and felt like what’s the hurry?”. She also “stopped freaking out about stuff (celebrity appearances) stopped looking at the crazy things like Who Wore It Better.

“I’m done with women being compared.”

We know that Melissa was an active child as she spoke of pictures of herself as a cheerleader, doing sprints, lifting weights, doing gymnastics, playing tennis etc.

Melissa was not big on working out. She said in an interview that she would jog every other day. But once she was on a weight loss mission, she worked closely with her trainer to shape up, especially during the movie Spy when she trained in martial arts.  She works out at least five days a week doing cardio and weight training or strengthening training.

Along with eliminating junk food, most meals Melissa ate had lots of organic vegetables, lean protein and only a small amount of complex carbohydrates. Her meal plan involved the following food items:

Melissa McCarthy has two daughters  Vivian and Georgette, who can learn to love themselves for who they are. Melissa’s confidence has skyrocketed so high, she openly said she feels bad for the people who body shame her, as it sheds light on their own insecurities and flaws.

“There’s an epidemic in our country” “Girls and women feel bad about themselves based on what .5% of the human race looks like,” she told Redbook in 2016. My message is, as long as everybody’s healthy, enjoy and embrace whatever body type you have.”

Steal The Style: Ways to Look Like Kylie Jenner

I love this article. It is full of great information. I feel better when I drink green tea. It gives me a sense of well-being and seems to energize me. Just taking time for tea and it makes my day go better. The fact that it may inhibit fat retention in the body is a bonus.

Hey Nehita, Great post. Weight loss journey of Melissa is very inspiring. I have also tried very hard to lose weight. But you know all is well that ends well. I lost about 8 kg in 3 months last year. Things that were my companion throughout my journey of weight loss were my cycle and healthy diets. I used to take sabja seeds and that helped me most to lose weight. It made my struggle a little easier. Thanks for sharing such an inspiring post.