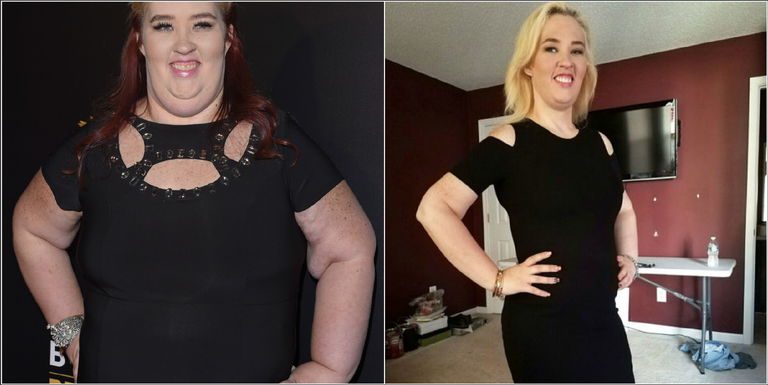 In 2020 the reality star from “Here Comes Honey Boo Boo” ran off with her troubled boyfriend Geno Doak amid their crack cocaine arrest. This might explain why in February 2019 she gained all the weight back ( revealed in the “From Not To Hot” trailer). Mama June rose to fame on the back of her daughter Alana ‘Honey Boo Boo’ Thompson, who was the star of a reality show that was hugely popular on both sides of the Atlantic.

In November 2015, Mama June told Daily Mail that walking helped with her weight loss. Her thoughts on walking three to five miles per day were: “Once you get started with the kids you don’t think about it,” she said. “You’re walking and you’re like ‘I’ve already walked three miles!'”

The former Here Comes Honey Boo Boostar underwent gastric sleeve surgery in 2016, dropping down to a size 4 from 460 pounds!

Mama June underwent bariatric surgery, having part of her stomach removed as part of a sleeve gastrectomy, in 2016 and reportedly lost more than 300 pounds thanks to the surgery.  Dieting and her personal trainer, Kenya Crooks also influenced the weight loss.

But her struggle didn’t stop magically in 2016. The months that followed her gastric sleeve fitting, June was still prone to bingeing on rich, calorific foods – which made her vomit in agony.

During an episode of Mama June: From Not To Hot (March 2017), she confessed that:

“I’m joining a small weight-loss support group. Although I got rid of out all my junk food, it would be great to get some help to keep the weight off long-term. I mean, I’m really nervous about walking into a room of people I don’t know and talking about my overeating. I’m scared, but I’ve got to do something.”

In addition to her significant weight loss, she underwent cosmetic surgery, spending a reported $75,000 towards getting a boob job and skin removal surgery to nip and tuck 9lb worth of excess skin on her stomach, arms and neck to look slimmer all over.

The “Mama June weight loss news” became a huge deal and she even bagged a reality TV show, Mama June: From Not to Hot. This aired on We TV on February 24, 2017. The second season premiered on January 5, 2018.

In 2018, Mama June sadly put on weight. She tried to break into the glamorous world of adult beauty pageants, and turned to a keto diet to help her shift the extra pounds.

Keto, which champions a diet low in carbohydrates and high in good fats and protein, is good for weight-loss as it forces the body to burn its own stores of fat rather than quick and easy glucose in the form of carbs and sugar.

“I’ve tried the keto diet – It’s like, cheese, eggs, protein, meat. And you honestly lose weight with that so it’s not that bad.” June said in a BUILD Series interview in the summer of 2018.

However, in May 2018, a trailer for the second series of From Not To Hot showed that Mama June was back struggling with her weight after piling on 25lb from her previous lowest weight.

Her rumoured spiralling drug addiction is a stark contrast to her healthy looking appearance in her most recent selfie.

The TV personality’s raw and emotional post comes after she faced a turbulent year which appeared to be a downward spiral as she got caught up in drugs, gambling and faced issues with the law.

June’s trouble began when she was arrested and charged with possession of a controlled substance and drug paraphernalia. Along with her boyfriend Eugene Edward Doak, the couple were arrested for allegedly having crack cocaine and a crack pipe on them.

See below a before and after of the coveted Mama June weight loss image:

Adding that she had never been a big fan of bread or pasta, Mama June went on: “I’m not here to tell people how to diet, because everyone’s different, but I know what has worked for me. I think people just don’t need to give up, and I think that’s what happens with a lot of diets nowadays. I’ve done that.”

She added that her focus now had to be on regaining the vision she’d lost in both eyes, explaining: “I can lose the weight, I know that. And I know I don’t want to go back over 200lb. I’m paying more attention to it.”

Mama June reportedly gets cravings when the kids go to bed, but thankfully Pumpkin is nocturnal enough to keep her in check. “I’m up late at night most of the time, but I tell her like, ‘Momma, you can’t do that,'” Pumpkin, her daughter told Entertainment Tonight.

“I have to show her [previous] pictures of herself sometimes, and she’s like, ‘I can’t even believe that’s me.’ I’m like, ‘If you don’t stop eating that junk, you’re going to go right back!'”

As an adult, June struggled with being morbidly obese, weighing 460 pounds at her heaviest. So it doesn’t come as a surprise that with all that reality tv money, Mama June decided to undergo weight loss surgery after regular dieting caused her to faint and put her at risk for some other health problems.

Mama June shed 90 pounds, and reportedly wanted to lose another 80 pounds in order  to reach her goal weight.

Dr. Christine Ren-Fielding, who has not specifically treated Mama June, told the paper that the reality star’s gastric sleeve surgery is a bit different from traditional gastric bypass surgery. “It sounds horrible that you’re amputating 80 percent of the stomach, but your digestive tract stays completely intact, unlike gastric bypass, which attaches the small intestine directly to the top of the stomach. The gastric sleeve is sort of like changing from a shirt to a spanx.”

Dr. Christine also adds that just because the surgery is done, it doesn’t mean that the work is over. She’ll go on a liquid diet for months following the procedure, “After that, it’s still up to [Mama June] to maintain a healthy lifestyle. People still have to eat healthy and exercise, or the weight will creep back. But think of how much easier it is to exercise after you’ve shed that first 80 pounds.”

Mama June also got a little help losing weight from one particular area: she underwent a procedure called “cool sculpting” to remove her double chin after losing a whopping 150

During the summer of 2016, she went on Botched but didn’t get the news she wanted: she was still a little too obese to undergo surgery to remove excess skin.

Her daughter Pumpkin told Entertainment Tonight, “Her stomach started looking gross [after losing a lot of weight]. It was hanging from where she lost so much weight, and her arms and her chin, so she got [the skin on] her stomach removed.”

Her daughter Pumpkin also revealed that Mama June had cosmetic surgery on her breasts. “She got her boobies done,” the daughter said. “She went from a 44 long to a 36 up.”

Mama June gained her spotlight as the proud plus-size mum of child beauty queen Honey Boo Boo. Clearly, her weight loss has been a love-hate journey (relatable except for the drugs). As easy as it is to get into media headlines, it’s a 1000 times harder to do the hard work and discipline it takes to lose weight.

Most expensive shoes of the world that are worth coveting

The Wonders of Essential Oils and How To Use Them