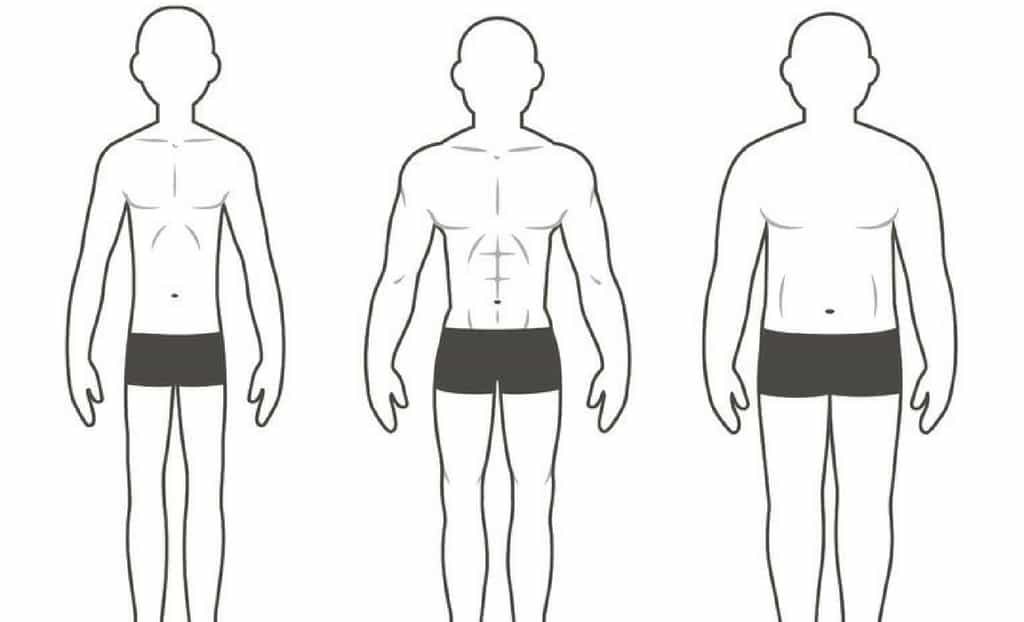 In order to make the most of a fitness routine, it’s really important to know the male body types. Based on the individual characteristic of your body, you have the knowledge on how to train like a beast.

Some men look good in skinny jeans, and others don’t. That’s why it’s important to know what is right for you and make your size work for you. Generally, we tend to think of body sizes in a broad perspective. Men are either tall or short, muscular or stocky or lean. Just as some men are different, the common body types are Ectomorph, Endomorph and, Mesomorph.

So, let’s look at how you can figure out your own body type.

Rewind back to 1940 and you’ll see that an American psychologist William Sheldon classified male bodies according to three body types: ectomorph, endomorph, and mesomorph. Now history buffs will be shocked at how recent this sounds.

According to William Sheldon, our physical features help with a distinctive differentiation. His theory is that people with the same body shape also had some psychological traits in common.

Although 1940 sounds recent to make a discovery about body types, the sentence above sounds very old fashioned and outdated in today’s modern open world. However, this psychologist’s distinction of male body types is very relevant to fitness and nutrition!

So as we’ve mentioned above, the oldest way to look male body types of your husband, boyfriend or even yourself, is to look at yourself physically.

The characteristics of ectomorph, endomorph, and mesomorph are distinct and can be seen if you take a look in the mirror:

William Sheldon classifies ectomorphs as men with lean and thin legs and arms, narrow chest and shoulders, and little-to-no body fat. They are known as cerebrotonic because they have narrow faces and appear very delicate. This male body type has a hard time gaining weight – no matter how much they eat, they remain skinny.

When it comes to their distinct appearance, the psychologist from the 1940’s

Ectomorphs should do three days of strength training and coupled with two days of low-intensity cardio. Effective abs exercises include the captain’s chair, the bicycle crunch and abs crunches while sitting on an exercise ball.

You can do ten sets of ten reps in key moves such as the bench press or barbell squat.

With Ectomorphs, there is no need to live in the gym to put on muscle – quite the contrary, in fact. “If you’re working out four days a week you’ll end up increasing your metabolism too much,” says trainer Hughes. “I tend to limit my ectomorphs to three workouts a week, keeping the actual training time after a warm-up to 45 minutes or less.”

For Ectomorphs, a diet that is high in calories, carbs, protein and fat will aid you in muscle gain. This should not be mistaken for eating precisely what you like. Rather, it just means you should eat more of what is healthy.

Good news: you don’t have to steer clear of carbs such as oats, wholemeal bread and potatoes. The fats from seeds and nuts like peanuts and almonds, and avocado will also bring about the right results. Ectomorphs mostly adhere well to carbs, which will spike blood sugar and help to drive protein to their muscles.

You can even eat the complex kind, such as sweet potatoes and brown rice. Eat a 2g per kilo amount of  bodyweight per day with a protein minimum, but be wary of overdoing it.

Another one of the male body types is the endomorph body. This type is the polar opposite of the ectomorph body type and is known as viscerotonic. The men are plump and buxom with narrow shoulders, large arms, and skinny wrists. Combined with wide hips and extra fat on their thighs, an endomorphs body has a characteristic pear shape.

Ectomorphs are in fact the polar opposite of ectomorphs in terms of their behavior. According to the psychologist Willam Sheldon, endomorphs are fun-loving, even-tempered, and sociable.

Although a lot of an endomorph’s focus should be on shedding fat through aerobic exercise, weight training is infact the best. This is because weight training carries on burning calories long after your final set.

Interestingly, the calories you eat during the recovery period will help your muscles grow rather than fuelling your gut. Therefore, it is recommended to do four days a week of hypertrophy training (heavy weight, low reps) alongside your cardio.

From a nutrition perspective, a low-carb diet that still includes oats and brown rice should go well with a high protein and fibre intake. For this body type, green tea and spinach with aid with the fat burning process. With this type of body you must eat far more strictly than people with other body shapes. Eat carbs from vegetables and avoid white bread and rice.

Mesomorphs are also known as somatotonic and have muscular bodies with strong arms, strong legs, and very little body fat. Mesomorphs normally have a narrow waist and a large head that matches their broad shoulders.

According to Sheldon’s characterization of Mesomorphs, their psychology is somewhat similar to endomorphs. Mesomorphs are adventurous, courageous, and assertive. Always willing to take chances, it’s interesting to see that this body type tends to be more competitive and prefer being dominant in relationships.

Mesomorphs are best trained athletically. Do sprints, box and vertical jumps or other plyometrics. This body type responds well to low reps and power moves. Alternatively, interval sprints will pump up their metabolism and strip away fat.”

Although the usual caveats apply, the good news is that your body will respond well to whatever healthy food you put into it. “You can eat a moderate amount of carbs,” says Hughes. “And err on the side of more when it comes to protein.” A basic guideline for mesomorphs to follow would be to consume meals that are 40% complex carbohydrates, 30% lean protein and 30% healthy fats. So, for example, a plate that contained vegetables such as broccoli, grilled chicken and olive oil on whole grain bread would represent a staple dish for this body type.

Mesomorphs who are sub-15% body fat should aim for 6g carbs, 4g protein and 1.2g fat per kg of body weight on training days. On rest days you can reduce the carbs to 5g. More healthy fats will make up for the reduced carbs without risking insulin sensitivity that can make you store fat.

In today’s body standards William Sheldon’s classification has possibly left out one male body type. The “stocky” body type is a good example of us looking outside the lens of a 100 years ago. As this doesn’t technically fall into the usual male body types, think of this one as a bonus.

Truth be told, if William was alive he would probably put this under an endomorph body type but it somehow doesn’t necessarily fit. Men who are stocky are shorter than average with broad shoulders and hips. They gain muscle easily and have difficulty losing excess fat.

There are some dos and don’ts when it comes to male body types. Everyone is different because none of us are cookie cutter shapes and sizes, but I’m sure that this was a fun read.

Katie Kimmel: All You Need to Know About Jimmy Kimmel's Daughter

How To Lose Neck Fat with 10 Easy Tips