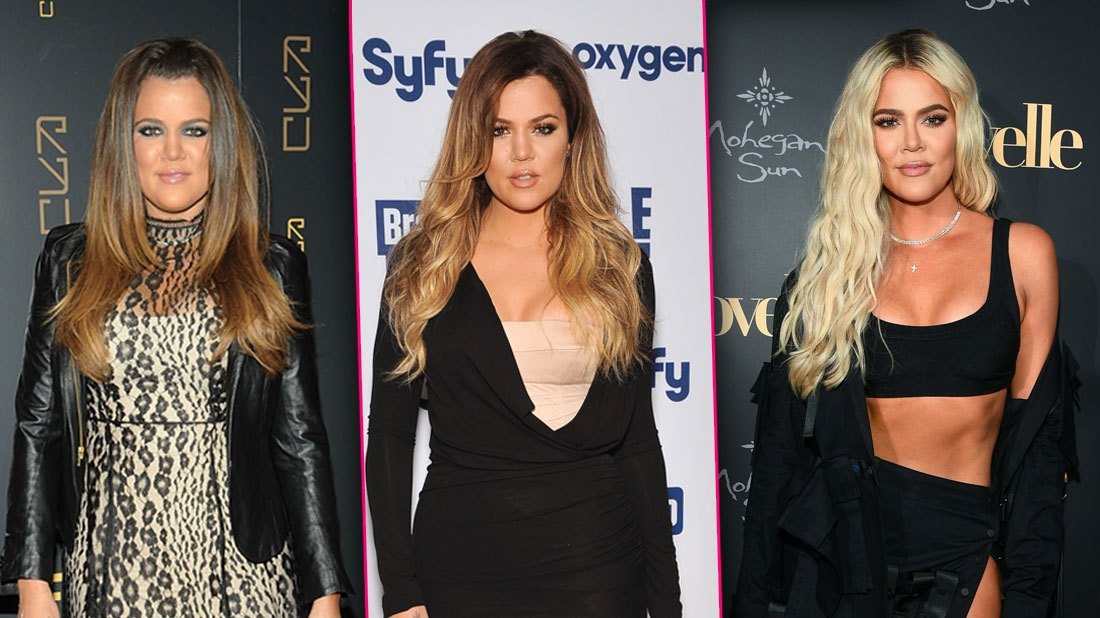 This seems very expected when someone grows up with Kim and Kourtney Kardashian. School, family photos, friends, media, etc all meant being compared to her sisters. At one point in her life she developed a funny side to compensate for this, and her childhood weight only added to this. Despite not really being fat or obese, her almost 6 feet height added to the persona of being “the huge sister”.

As a kid being 5’10 in height and being called the fat sister is the worst criticism a child can receive.

When Keeping Up With The Karshadians was gaining some weight, her mom and her sisters told her to lose weight because it was hurting the family brand. Although she knew it was good for the business, it was, I’m sure it is still hard to hear. Even though supporting your family business seems like a good reason to buy a gym membership and a determined trainer with all that good money she earns, it was her divorce to Lamar Odem in 2013 that set reality straight, and pushed Khloé into a fitness frenzy.

Khloé started working out during her divorce to come to terms with all of her emotions. Not only was working out therapeutic, a by product of sweating it out (emotions and fat) was a serious weight loss.

Once she began to see definition in her body, she decided to stay committed to a healthy lifestyle. Thus, revenge body was formed.

In 2014, Khloe famously began her physical transformation and dropped a whopping 40 pounds and four dress sizes.

“I work out almost every day,” she tells PEOPLE. “I go to a trainer five days a week, and on the weekends, I do cardio and whatever I want to do.”

“I kind of eat what I want, but in portion control, which I never knew before,” she says. “It’s really hard. You have to train your body to eat less. Your eyes are bigger than your stomach.”

She adds: “I had to train myself to drink more water. I drink like 5 liters of water a day.”

The Revenge Body star wrote that she would “kick off 2018 right,” promising to share her “weight-loss advice, health hacks and more” during Health & Wellness Week on her app.

Although Khloé Kardashian says she never considered herself fat, she revealed that after getting her own revenge body she could never imagine being as unhealthy as she used to be, according to People.com

While sharing a transformation post on social media this weekend, the mother-to-be got emotional as she described the drastic changes she experienced after embarking on her journey towards becoming healthy “mind, body and soul.”

“Sometimes it’s hard for me to post these transformation posts only because I can’t imagine my life being this unhealthy again,” the 33-year-old Keeping Up With the Kardashians star wrote.

“Never would I ever consider myself fat, But I would consider myself unhealthy mentally/physically and not knowing my true value. Mind, body and soul,” she added. “For me, my transformation journey started from within. I needed to heal myself from the inside out. Once I started putting myself first, everything started falling into place.”

See below a before and after of the coveted Khloé Kardashian weight loss image:

The 33-year-old welcomed her first child, a daughter True, in April, with boyfriend Tristan Thompson and she has been keeping followers up to date with her dedicated fitness regime. It’s believed she has lost 30 pounds in the weeks since giving birth and is in the midst of returning to a tweaked version of her normal exercise routine to be more gentle on her body.

In 2015, Khloé said “I kind of eat what I want, but in portion control, which I never knew before,” she says. “It’s really hard. You have to train your body to eat less. Your eyes are bigger than your stomach.” She adds: “I had to train myself to drink more water. I drink like 5 liters of water a day.”

This means that over the years, she took baby steps towards her weight loss journey.

Khloé took her diet up a notch, and cut out all sodas or soft drinks,and even went dairy-free for two weeks. This resulted in a whopping loss of 11 pounds! Being a cheese lover, going dairy free was tough for the Kardashian, but we can all admit that it paid off.

In 2017, Khloé Kardashians nutritionist had her eating 7 meals a day to stay slim.

Then in 2018, Khloé got pregnant and was very focused on being healthy.

“Still, as active as I have been during my pregnancy, I feel great. “For me, health and wellness resolutions are especially important this year,” Kardashian wrote on her site. “Being pregnant, it’s a whole different type of self-care. I still exercise to maintain my sanity and also to feel good about myself, but my workouts are not as intense as they once were.”

“I’m also eating differently — of course, I have cravings, but I want to make sure I’m supplying my baby with the proper nutrients,” she explains. “I’m focused on being healthy mind, body and soul for myself and the baby. But, man, I can’t wait to be a beast in the gym already, LOL!”

Not only has the Kardashian developed strict eating habits, but she also gets plenty of exercise.

The youngest of the Kardashian trio exercises six days per week to stay in killer shape. According to Shape, she focuses on a different area of her body each day. One day, she’ll do cardio, and the next day is followed by legs and butt.

Her workouts, which are created by personal trainer Gunnar Peterson, involve the full body and are actually fairly quick. According to Women’s Health, the routine includes jumping jacks, deadlifts, jogging in place, and other well-known exercises all wrapped up into one workout. Peterson suggested that this full-body workout can be done more than once, depending on how much time you have on your hands. He then says to supplement days off with either a cardio workout or a favorite sport. It’s clear that Kardashian puts a lot of effort into the way she looks and feels — and it has totally paid off.

How many pounds did Khloe lose?

It’s believed she has lost 30 pounds in the weeks since giving birth and is in the midst of returning to a tweaked version of her normal exercise routine to be more gentle on her body. In 2014, Khloe famously began her physical transformation and dropped a whopping 40 pounds and four dress sizes.

What diet did Khloe Kardashian use?

She used a 7 meal diet. The Kardashian has a late-afternoon snack, which could be either another cup of celery or more tomatoes; this time, she pairs the tomatoes with a fried egg for some extra protein. For dinner, she typically eats fish (salmon or sea bass are common choices) paired with more veggies and a salad.

What does Khloe Kardashian eat in a day?

Dividing a diet into seven meals a day means that each filled with either healthy fats, protein, fruits or veggies. Khloe starts her day with a shake made with whey protein powder, almond butter, a serving of fruit and ice, followed up with a piece of fruit as a mid-morning snack.

What size is Khloe Kardashian?

How old Is Khloe Kardashian?

What does Khloe Kardashian eat for breakfast?

“We all know that breakfast is the most important meal of the day, but that doesn’t mean it has to be so much f—— work to prepare,” she says. Kardashian then went on to share her favorite “and sooo easy” 3-ingredient breakfasts: spinach and bell pepper omelets, yogurt parfaits, and almond butter and banana toast.

How often does Khloe Kardashian workout?

The youngest of the Kardashian trio exercises six days per week to stay in killer shape. According to Shape, she focuses on a different area of her body each day. One day, she’ll do cardio, and the next day is followed by legs and butt.

What salad do the Kardashians eat all the time?

The Kardashians eat salads on their show all the time. According to Page Six, they get them from a place in Calabasas called Health Nut. Kim Kardashian has tweeted about her order, which is a chef salad (chicken, romaine and iceberg lettuce, shredded mozzarella, tomatoes, sprouts and sunflower seeds) and a mango iced tea.

Now all that’s left to do is for you to decide if you want to try out the coveted “Khloé Kardashian weight loss” as a method for your own weight goals. She may not be the daughter of a retired Olympic gold medal-winning decathlete, but like her stepfather, Khloe perseveres through 3 injuries (knee injuries and operations) and heads for the gold, and so can you.

Oxalic Acid (Oxalate): It's Sources and Impact on Your Health