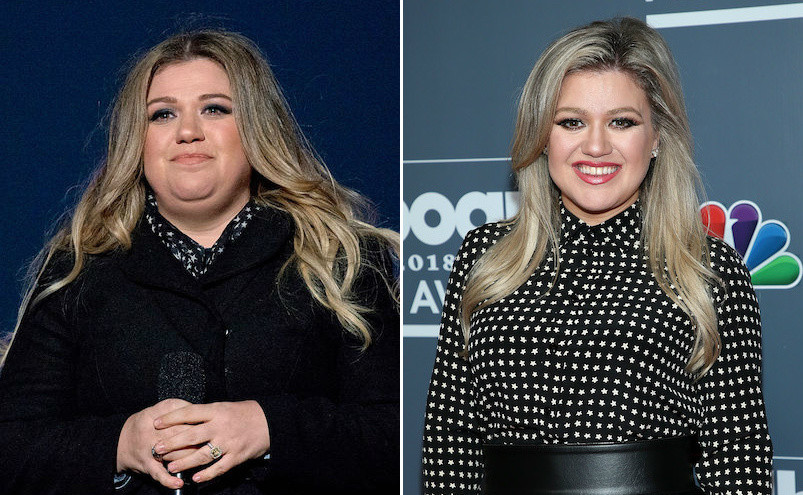 Back in 2019, no one was expecting Kelly Clarkson to be the fact of healthy living, let alone weight loss. She has proved all her haters wrong by shedding a whopping 37 pounds with grace and her ever so favorable honesty.

The Voice, American Idol coach and new talk show star have always been very real about what she felt about her body and her weight gain over the years. You’ll soon see exactly what motivated her to partake in shedding to her size without a single drop of sweat (and maybe even a little of wine was involved).

We all know that behind those powerful vocal chords is a strong lady who is oh so comfortable in her own skin and taking pride in her efforts to lose weight, her way. Let’s look at how Kelly Clarkson got it done, piece by piece:

We all remember the young skinny Kelly who shot up to fame in the first season of American Idol. Then we saw her in those iconic music videos with her rock star look. Ever since her weight gain, she has undoubtedly been real about her weight, body shaming, body positivity and body image. We love Kelly for these reasons but interestingly, Kelly Clarkson’s weight loss journey does not include exercise.

Nop, during a red carpet interview—“I literally haven’t worked out at all!” Kelly Clarkson said, “I think people think I’m working out and I’m like, ‘Don’t think I’m going to come play some sport!’”

In fact, she kept it so real on Twitter saying that she hates working out. “I’m sweaty, red, and not any thinner…. people say it’s good for your heart…. but people also say red wine is good for your heart. I mean, I’m just stating facts here people. Who am I to ignore science?!”

Kelly Clarkson has been quick to respond to people calling out on her size, especially the music industry. And she does not shy away from helping out others by openly sharing the TRUTH behind her weight loss.

“It’s basically about how we cook our food, non-GMO, no pesticides, eating really organic,” she said. Clarkson read the book for medical reasons, she told Extra: “I did it for this autoimmune disease that I had and I had a thyroid issue, and now all my levels are back up.

Even though she’s been crediting The Plant Paradox book, certain talks about how she slimmed down using pills start circling twitter. So she clapped back at those false claims by saying:  “Other fake news that’s going around about me is that I’ve been taking weird pills 4 weight loss or doing weird fad diets. All of this is not true. I ain’t got time 4 all that. I eat the same stuff I always have. It’s all just made w/different flours/sugars/ingredients.”

Her last statement is true because according to the book, on her  Do Not Eat list were: refined starches like pasta, rice, and bread; beans, lentils and, peas; soy foods like edamame and tofu; dairy products such as ice creams, yogurts, and cheese; diet soda and artificial sweeteners; all other fruit besides berries; and an extensive list of vegetables.

After that she was proud to tell the Today show in 2018 that: “I had an autoimmune disease and a thyroid problem that started in like 2006. I read this book…it might not work for you but it worked wonderfully. Here’s the best part, ya’ll…I’m not on my medicine anymore. My bloodwork came back and I haven’t been on my medicine since like February.”

The strict protocol outlined in the book, and followed by Kelly Clarkson genuinely helped to relieve her thyroid condition and get her off the daily medications she was dependent upon.

So yes, her weight loss was a “side effect” of her efforts to combat another health issue which needed good nutrition and some extra cash.

She told Hoda Kotb on Today that:  “Even like fried chicken—I use cassava flour, tapioca, or almond flour, and you use non-hormone chicken….and honestly, I’m going to be real with you: It’s really expensive to do”. (she’s so honest, got to love her).

Body Positivity is Everything

From the time she first appeared on American Idol people have been focused on her weight, but over the years, the strong singer doesn’t let that noise bother her as you’ll see with incidents below:

Singer Kelly Clarkson has seen her weight fluctuate over the years and she has become one of those celebs who has been body-shamed since American Idol. The Internet had a lot of comments for her after she didn’t immediately shed the weight after the birth of her daughter in 2014. I mean, even Cardi B was honest about getting liposuction done in order to quickly bounce back to being camera-ready after giving birth to her daughter Kulture with rapper Offset.

Kelly Clarkson who is no stranger to criticism about her size, reportedly laughed it off after British personality Katie Hopkins tweeted negative comments about her weight.

“Sometimes we’re more fit. Like, especially me,” she said during an interview on The Ellen DeGegeneres Show back in 2015. “I’m such a creative person that I yo-yo. So sometimes I’m more fit and I get into kickboxing hardcore. And then sometimes I don’t and I’m like … I’d rather have wine.”

She also opened up to Ellen about how she was the biggest girl from way back in 2002 when she won the first season of American Idol.

Kelly has had to deal with A LOT of body-shamers who’ve has a great deal to say about her weight. “I was the biggest girl in the [American Idol cast] too,” she told Ellen in 2015. “And I wasn’t big, but people would call me big … I’ve kind of always gotten that.”

She then added: “I think what hurts my feelings for people is that I’ll have a meet and greet after the show, and a girl who’s bigger than me will be in the meet and greet and be like: ‘Wow, if they think you’re big, I must be so fat to them.’ And it’s like, you’re just who you are. We are who we are — whatever size.”

Kelly Clarkson tweeted a note of thanks to service members in honor of the 4th of July holiday. “Thank u 2 every person in service 4 protecting all of us and cheers to every person who fought for us to experience freedom & independence,” Clarkson wrote on Twitter.

“You’re fat,” one amazing character of a human being replied to this Independence Day tweet the singer had posted thanking the men and women fighting in our armed services. That show of patriotism must have annoyed him but he wasn’t expecting Kelly to shut him down!

The new “Voice” coach shot back with a tweet saying “and still f***ing awesome.”

The “Because of You” singers  beloved fans were quick to jump in the comments with messages of support, prompting the troll to hate them for also being “fat.” These were some comments:

The same year Kelly Clarkson said: “Too skinny, too fat, too blonde—so much blah,” in Daily Mail in 2017. “This is who I am and I’m happy. Happy looks different on everyone.”

In 2018 she wrote about gaining some holiday weight:

“To the person that lost weight over the holidays…. Don’t worry, I found it and I will get it back to you starting January 1st,” the singer joked on Twitter in December 2018.

But to add more power to her message, in a 2018 interview with Redbook, Kelly Clarkson got real about the pressures that she’s faced as a curvy woman in the spotlight. She stated that it doesn’t matter if she loses weight or gains it all back, people find her size to be an issue no matter what.

“They shame you for [losing weight],” she said. “Same thing happened with Miranda Lambert — I had dinner with her and we were talking about that. She was like, ‘Should I gain? Should I lose?’ But no one actually cares about your health. They just care about aesthetics.”

She went on to say:  “It’s when I’m fat that I’m happy. People think, Oh, there’s something wrong with her. She’s putting on weight. I’m like, ‘Oh, no! I’m sorry, but that represents happiness in my emotional world’ For me, when I’m skinny is usually when I’m not doing well. If you gauge your life on what other people think, you’re going to be in a constant state of panic trying to please everyone. People should just concentrate on their own lives and their own health and their own happiness, and whatever that looks like for you, be happy with it.”

You can tell through Kelly Clarkson’s life that she feels a purpose in helping people to genuinely feel good about the skin they’re in. Happiness looks different every day and to put off a consistent nutritious meal without artificial flavors or hormonal based produce is amazing! The Kelly Clarkson weight loss method is so easy, anyone can do without breaking a single sweat!

How to handle Seasonal Affective Disorder (SAD) during fall