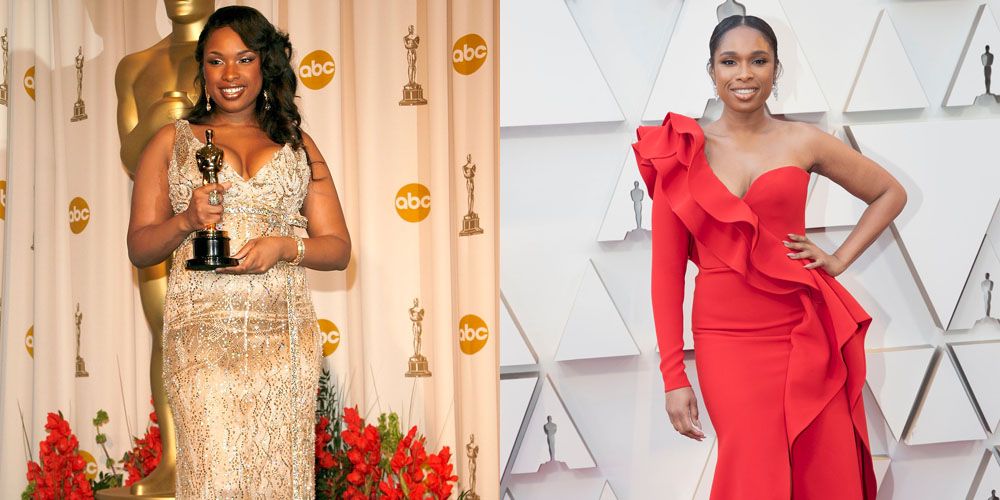 Jennifer Hudson lost an impressive 80 pounds by slimming down from a size 16 to a size 6, over the course of her weight loss journey. When Jennifer Hudson first started to lose weight in 2011, she admitted that she sometimes has to look twice when she sees herself in photos.

But do you know what’s even more impressive? The Grammy-winning singer kept up with her weight loss for 11 years now! Even though research shows most people who drop significant pounds later regained the weight they lost, Hudson has managed to keep her figure years later. It wasn’t easy because the actress/singer believes in body positivity and stuck to her opinions on body image stating that she lost a little too much weight for a movie. She said that she doesn’t want to get any thinner stating: “I don’t want to lose any more weight, and you’re never going to see me skinny.”

Why did Jennifer Hudson start her weight loss journey?

Hudson stated that she started her weight loss journey 4 days after she had her son. She said that she didn’t have someone who set an example for her growing up. So she began her weight loss journey after being pregnant and wanting her body back to set an example for her son.  “Most of all, I wanted my body back. So, I made up my mind while I was pregnant that as soon as I have my baby, I’m going in and I am determined.”

That’s where Weight Watchers stepped in because the actress and singer said the real reason she says she was unable to lose the weight in the past is because she simply didn’t know how to eat. In addition to that when people say that Jennifer Hudson was able to lose weight because she’s a “celebrity”, sponsored by Weight Watchers, has a personal trainer and employs a chef- Jennifer shut that statement down with the following statement:

“I cook all my meals at home. When I work out, I like what I do. I don’t believe in overdoing myself,” she says. “It’s all about self-motivation because at the end of the day, you can have all the trainers and all the money in the world, but if you don’t have that mindset, it’s not possible.”

As we know her motivation to lose weight came from a special place of motherhood. “Now I see myself through him,” Jennifer responds.”I’m a mother and I have a life that’s in my care and someone that looks up to me. That helps me see [myself] in a whole other light in a different way. It’s a whole new world.”

With her new slim figure, Hudson loves to indulge in fashion and picking out new clothes to wear. “It’s so much fun, I can’t even sleep at night because I can’t wait to find out what I’m going to wear the next day,” she says. After slimming down from a size 16 to a size 6, Jennifer Hudson revealed the unreal feeling of shopping for smaller size clothes—and she’s also not used to the attention she gets from fans and men over her appearance. She was so not used to this new body that she said it didn’t feel real because it’s a mental thing.

“Your mind has to catch up. And to me, I’m still the same. I’ll have somebody come up to me and say, “Wow, you look amazing.” I’m like, what have I got on? What are they talking about? I forget what I look like.”

Hudson started to lose weight thanks to Weight Watchers. And with her diet she said she had a renewed outlook on life. “It’s like a brand new me,” Jennifer says. “Sometimes I don’t even recognize myself. It’s not a diet, it’s really a way of living that teaches you better skills.”

A Weight Watchers leader said that Jennifer was able to lose the weight by giving up  her old diet strategies and adopting the Weight Watchers techniques. Initially, Jennifer didn’t listen at first. “She was literally doing her own thing,” she recalls.

Three weeks after starting her weight loss journey, Jennifer originally gained weight. Her trainor says that was Jennifer’s aha! moment. Jennifer agreed to follow the Weight Watchers points for one week: She counted Weight Watchers points, ate in moderation and even allowed herself to reincorporate foods like pizza and ice cream back into her diet. “She lost weight that first week,” she says.

Here are some more of her diet tips:

She Keeps Tempting Food at Bay

As the saying goes, “out of sight, out of mind.” Hudson stresses the importance of surrounding herself with appropriate portions and healthy options, and is sure to limit temptation. “I don’t like too much junk in my dressing room because I have to watch what I eat, so I put everything else out of the room,” she told Lorraine Kelly on the British talk show, Lorraine.

So any easy way to prevent yourself from eating junk food is to either stop adding it to your shopping cart or to just throw it all out of your kitchen pantry. Only then can you give yourself a chance.

She Stays Away From Crash Dieting

“The hardest thing for me is to give up the diet mentality. I was depriving myself of so many things. You know a lot of people skip breakfast and don’t realise how important it is.

“You shouldn’t deprive yourself of those things because, okay you’re only doing it for a short while. So I would say that getting out of the diet mentality of I can’t have this and I can have that”

On Oprah, Hudson had revealed that when she first dropped the pounds  it was a lifestyle change. “I had to break my diet mentality,” she told Self in 2011, “I used to deprive myself, thinking that was healthy. I didn’t eat pasta, fried food, red meat. I hadn’t had pizza in 10 years. If you’re on a strict diet that says you shouldn’t have any carbs or this or that, your body won’t function the way it should.”

That’s why extreme diets are unrealistic and making the decision to avoid partaking in fad diets is important in long term weight loss. Instead, focus on saying yes to other weight-loss tips ike meal prepping and eating the food without skipping any of it.

“I always have to have chocolate around—it’s my cigarette. I don’t smoke but it calms me so well,” Hudson told Yahoo! Style.

As surprising as it seems, people that give themselves cheat meals exceptions are actually more successful in their weight loss journey. Satisfying cravings can boost metabolism and prevent feelings of deprivation, allowing you come back to your diet plan for the rest of the week.

In fact,  the star revealed that she feasts on chocolates, in a bid to achieve her ideal weight, after having to lose 10 extra pounds for an upcoming film role.  As a result of losing that much weight she realized that her diminishing frame had become too small for her liking.

“I think this is the final, lowest weight. I actually was just filming a movie where I had to lose 10 pounds, but I started thinking maybe this is too tiny. I still like to have some curves.

I just spent the past week working my way up to my ideal weight,” she said.

And it was 31-year-old’s love for sweet treats which helped her boost her figure after wrapping production on the unnamed film.

“I love chocolate. I ate the rest of my weight. I got to the point where I was like, this is enough. So I’ve gained all the weight back.”

On Lorraine, Hudson explained, “I’m very conscious of what I put in my body,” adding, “I’ll be out and think, “no it’s too early to eat right now.” Mindful eating is a key element to a healthier lifestyle and relates to not only deciding when to eat, but also what, how much, and where the meal should be.

Commercials for unhealthy food and drink can cause unhealthy cravings and, because TV is so distracting, you are unaware and keep scarfing down food until we’re way past full. Becoming aware of your plate can also mean using smaller dishes and waiting in between portions to give your body time to register being full.

The dangers of eating in front of a TV once recognised will help you lose weight as you  establish food rituals like making a point of always eating meals at a table. Habits like these are great because it can be done anywhere and it guarantees a focus on what you’re eating. You no longer eat multitasking.

Hudson decided to start her weight loss journey after becoming a mom. She said she would come up with plans to walk instead of take the elevator and walk instead of driving to short distances. She started off wanting to be active to set an example for her son.

The new mom told InStyle magazine: “I’m like, ‘Wow! This is what I look like?’ She got toned by working out five times a week with celebrity personal trainer Harley Pasternak and also followed her WeightWatchers diet.

“I don’t have time to do much exercise, I just watch what I eat,” Hudson admitted on Lorraine. Although the actress and singer doesn’t have a free schedule all the time,  she still finds time to get her heart rate up. Previously, Jennifer has revealed how she incorporates unorthodox workouts: “I love basketball. It’s fun, you don’t even realize you’re working out,” she said, “[You] just keep that metabolism going and just keep that energy up.”

How does she stay motivated to remain fit and not put all the weight back on?

In a video with Good Housekeeping Hudson says she remembered the hard work she had to put in to get to a place- where goals can be conquered. Secondly, she reminded herself that she’s there, she’s reached her goals.

How did Jennifer Hudson lose weight?

The entertainers fans have followed Jennifer Hudson’s weight loss journey in addition to her career. Her weight loss afterwards shocked the world after she lost and maintained the 80-pound weight loss.

When did Jennifer Hudson lose all her weight?

By the summer of 2011, it was reported that Hudson had shrunk to a size zero. In Nov. 2012, the Oscar winning actress and singer announced she had dropped 80 pounds and is done losing weight and started eating more to get to her ideal weight.

How much did Jennifer Hudson weigh in Dreamgirls?

Hudson weighs around 138 pounds on HowMuchDoTheyWeigh.com.

What size is Jennifer Hudson now?

Even though it’s been nearly a decade since she toned up her body in 2010, Hudson has managed to do the toughest thing in the world which is to remain consistent. That’s why she looks the same even after indulging in her cheat food and hitting the gym. We hope you’ll find the tips of the Jennifer Hudson weight loss story, inspiring enough to start incorporating her habits into your daily routine.

Your Guide to Types of CBD Products