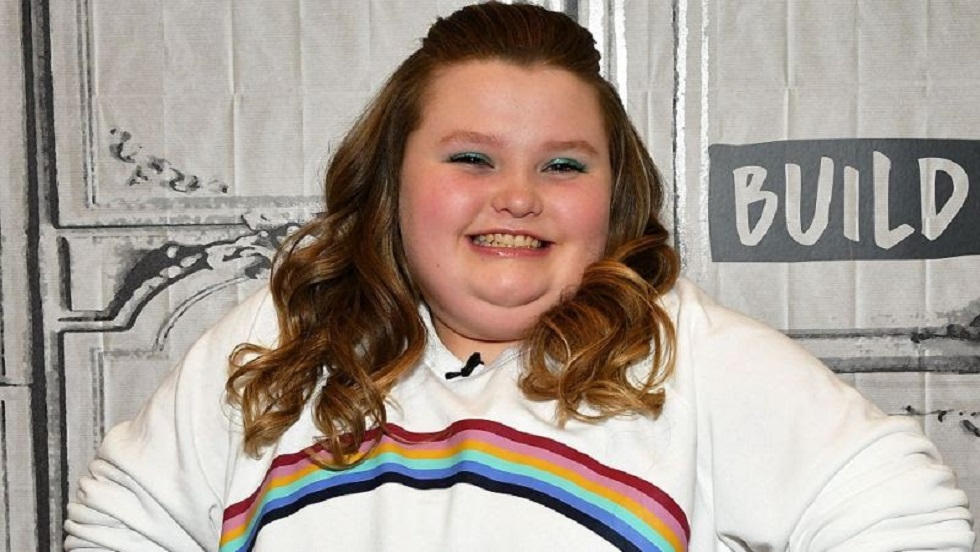 At the age of 12, Honey Boo Boo was inspired by her mother Mama June Shannon’s weight loss journey when Mama June went from size ’24’ to size ‘4’. With some healthy diet and exercise, her mother successfully shed a lot of pounds.  In January 2018, Alana aka Honey Boo Boo revealed to Inside Edition that she also wanted to drop her weight like her mother and had been following a ‘no-grease-diet.’

Reality TV star Alana Thompson is the  daughter of June Shannon and Mike Thompson, who became prominent as the one who mesmerized the audiences from her appearances in Toddlers & Tiaras and Here Comes Honey Boo Boo. The child star has  also appeared in her mother June Shannon’s weight loss series Mama June: From Not to Hot.

But did you know that Honey Boo Boo has also competed in the inaugural season of Dancing With The Stars: Juniors in 2018?

Did Honey Boo Boo lose a bunch of weight?

“Now that June is firmly committed to eating a healthy, balanced diet herself, she’s keen to get her kids on board. It helps that it would make for a great TV show too!”

Mama June was hoping to get Alana a weight loss TV show but instead the 12-year-old has always been open about embracing her body and her curves. The child star wasn’t open to eating healthy while her mom was losing weight — and it didn’t help that her dad, Mike “Sugar Bear” Thompson and his new wife Jennifer Lamb aren’t on board either. The family got into an explosive fight after they sent Alana home with sweets and junk food, which no longer allowed in Mama June’s home.

Back in April, Mama June spoke from example when she told People that she didn’t want Alana or her 17-year-old daughter Lauryn “Pumpkin” Shannon to go through what she went through when she was overweight. Even if Honey Boo Boo isn’t happy about doing a weight loss show, her mom is determined to get her daughters on track to living a healthier lifestyle.

“I’ve seen Pumpkin and Alana lose and gain weight, but I don’t want them to end up like I did at 460 lbs,” she said. “Alana is super against the new TV show,” the insider continued. “She doesn’t want to lose weight or to start eating salads and exercising. She’s quite happy the way she is, thank you very much. But, June is pretty determined, and where there’s a will there’s a way.”

How much does Honey Boo Boo weigh?

The plus size child star had appeared as a special guest on the show “The Doctors” in 2015, where she underwent a health intervention. Back then the 4 ft. 6″ tall 9-year-old girl was around 125 pounds at the time and was labelled “obese” by The Doctors according to her BMI. Although Mama June initially defended her daughter’s weight as being due to steroid medication, towards the end of the intervention, Honey Boo Boo and her mom seemed excited about a possible weight loss.

In March 2017, Honey Boo Boo openly spoke about embracing her curves after resisting suggestions from Mama June’s doctor of changing her eating patterns or routine.

“Mama’s on this diet, but I’m not, boo boo. I like my curves. … I mean, seriously, this dude is really crazy.” “I’m not jumping on any bandwagon, unless it has cheeseburgers and stuff,”she said confidently when the doctor advised the family to stay away from fried and fattening foods.

Her mother, Mama June had a reality show which documented her own weight loss on:  Mama June: From Not to Hot where she lost about 150 pounds after undergoing gastric sleeve weight loss surgery. As painful as a lesson that was, Mama June has reached her goal and she’s adopted a healthier lifestyle,and wants to teach the same to help her daughter improve her eating habits too. For example, the reality star Honey Boo Boo spoke about how she had been on a “no-grease diet” for two months.

Mama June spoke on Entertainment Tonight that her pre-teen has been on a strict diet plan which limits intake of fried food and soda and her daughter already lost five pounds so far! “You can put on the weight very easily but it’s not that easy to come off. I promise you”, Mama June said, speaking from experience.

Honey Boo Boo has the perfect person to look up to for weight loss inspiration as Shannon scored her own reality show titled, “Mama June: From Not to Hot” . It followed her weight loss journey and healthier lifestyle to attain a new body and life. Her daughters Honey Boo Boo and Pumpkin also starred in the show. Mama June successfully lost weight after undergoing gastric bypass procedure and other surgeries and adopted an overall healthier lifestyle which resulted in a drop from size ’24’ to size ‘4’, a loss of 150 pounds on the scale.

What is the net worth of Honey Boo Boo?

First a child beauty pageant contestant, now reality TV star Honey Boo Boo who’s real name is Alana Thompson, has a net worth of $800,000.  According to The Sun, Alana, age 13, relishes her reported net worth. With her show Here Comes Honey Boo Boo, her family reportedly received about $50 thousand per episode. All in all, she has approximately collected a whopping $130 thousand from the TLC show alone.

Today, the child star is not the same six-year-old lady who wore the frilly pink dress and heavy makeup while debuting in TLC’s screen Toddlers & Tiaras. Honey Boo Boo regularly keeps her update to her fans from her Facebook account, which has over one million followers.

How tall is Honey Boo Boo and how much does she weigh?

The Here Comes Honey Boo Boo star is nearly going to surpass her mother in height. Born as Alana Frances Thompson in 2005, Alana is a native of Mcintyre, Georgia who will celebrate her birthday on 28 August. Most well known by the nickname Honey Boo Boo, the child reality star debuted at the age of six on the TLC’s reality show Toddlers & Tiaras. Her height is 1.37 m (4 feet and 6 inches).

How old is Honey Boo?

Why is Honey Boo Boo famous?

Honey Boo Boo is a child pageant star and the cameras followed her as she aimed to take home various prizes. Her quirky personality made her stand out from other girls and she became a hit with audiences everywhere. After her debut from the pageant show Toddlers and Tiaras, she appeared in numerous shows like Wendy: The Wendy Williams Show and Mama June: From Not to Hot.

In 2018, she gained popularity for her appearance in Dancing with the Stars as a Junior Contestant. Boo Boo along with her dance partner Tristan Ianiero mesmerized the judges with their dance performance of “Something There” from Beauty and the Beast.

Sadly, Alana and her partner Tristan were eliminated during the Halloween episode. Their jazz performance of Ghostbuster by Ray Parker Jr. could not win the hearts of the judges, and she cried after learning that she didn’t advance to the next stage.

How much does Honey Boo Boo make an episode?

For their work on the reality show “Here Comes Honey Boo Boo” her family was paid a salary of $50,000 per episode.

Like all of us, Mama June has expressed hope that her daughter will continue to live a happy healthy lifestyle and won’t have to go through the same mistakes she made.

Pregnancy Alert! A shout-out for all the Mother’s to be.

Opiate Dependence in the UK – from Prescription to Addiction