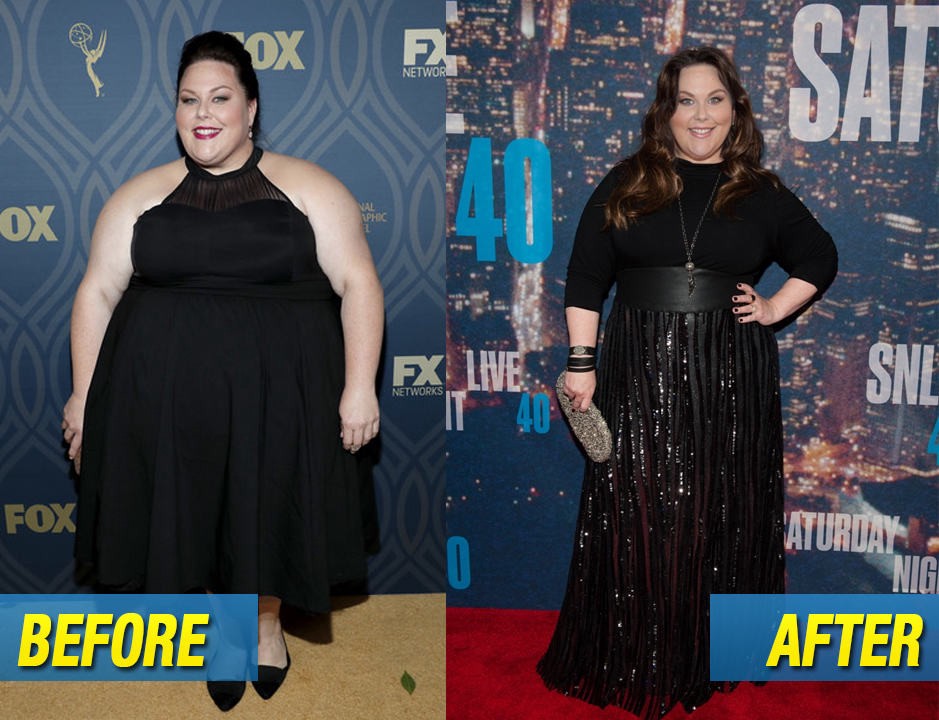 Weight loss is hard on everyone, so for those of you who are looking to be inspired, we discuss the Chrissy Metz weight loss journey starting with her childhood to her 2016 contract that required her to lose weight – this is you being inspired by the actress!

Chrissy Metz, the actress from This Is Us, has been very open about her weight loss challenges. And interestingly, her story even draws some parallels her character Kate from This Is US. “In that moment, Kate’s character and of course, I can relate to her, every ounce counts when you are weighing yourself, no matter how much you weigh,” said Chrissy Metz.

In this article we discuss: Chrissy Metz weight loss history, what she used as her strategy,  weight loss diet and workout, and some General Trivia about the actress.

Chrissy has struggled with her weight since a very young age. She once told the Hollywood Reporter that she was born chubby. And, even though she experienced thinner stages in her life, she always felt like the chubbier friend. From a very young age she had to become aware of what she ate, and envied her friends who could eat anything they wanted and not put on weight.

Metz spent her childhood Gainesville, Florida, with her mother, stepfather, and four siblings. “There were nights my mother wouldn’t eat dinner,” Chrissy stated.  “I knew she was giving up food so we could eat, it was devastating. In retrospect I think that’s why food equals love in my family. It’s the way we showed love — my grandmother would make me a grilled cheese sandwich every time she’d pick me up from school. I really valued that attention.

Then she continued “As I got older, that turned into, ‘Oh, I’m happy, let’s celebrate and eat! I’m sad? Let me eat my feelings!’ she told Glamour.

At age 11, Chrissy first started going to “Weight Watchers, and being the youngest in the room was sure to make her feel awkward and self- conscious. And, just like the character she plays in This Is Us, Chrissy like Kate, had parents who didn’t really know how to handle the situation.

Later, the actress began her acting career weighing as a size 12. But she dropped 50 pounds based on the recommendation of her manager. Sadly, acting jobs cannot be plucked out of a tree and when she wasn’t being cast, she got depressed. Chrissy began eating her emotions as a result.

Eventually, she ended up gaining more than a hundred pounds before having a panic attack on her birthday and this experience changed her attitude about weight. Following the incident, Chrissy Metz went on to lose a 100 pounds in a matter of only 5 months. “All I did was eat a 2000 calorie diet, and walk 20 minutes in a day.

Before we came to love Chrissy Metz from This Is Us,  in 2014, she was cast on another very popular show: American Horror Story.

She was required to wear a fat suit. This inspired to keep her weight in check as she didn’t want that image in her fat suit to become a reality.

“It was sobering,” she told People. “I thought, ‘What if I become that heavy and can’t walk around or get stuck in the doorframe? I was like, ‘I don’t want this for me.'”

Even fans of both shows may not have realized that Metz starred on season four, Freak Show, as Ima “Barbara” Wiggles, unfortunately and un-politically correctly referred to as the Fat Lady. While she had bit parts on Entourage and My Name Is Earl, she explained to Glamour in February that she was sure AHS would be her big break.

Her role as Kate Pearson in NBC’s hit This Is Us has not only struck a chord with millions of people but has also been an eye-opening experience for Metz herself. In a 2016 interview with TVLine, she revealed that because of her character’s story arc on the show, her contract includes a clause that requires her to lose weight.

Though it may seem outrageous for her employer to require weight-loss for a job, Metz says she wholeheartedly agreed to the arrangement, saying that her character’s experience and struggle with weight is very similar to her own.

Chrissy said she lost 100 pounds in less than five months by eating 2,000 calories a day and cutting out unhealthy food.

Metz said she also thinks those who struggle with their weight have a different battle than those facing addictions to drugs, alcohol or smoking, which are “sort of glamorized” in popular culture. “Like, oh she’s sexy. But if she’s overweight, she’s like sitting in the corner like a lonely sad girl. And you’re like, that’s not actually true,” she said. “And people don’t know people’s medical history. So I think there’s so many ways and I think it’s important for every individual to determine what makes them happy and how to get to that.”

This Is Us happened at the right time for Chrissy. She said, “The show This Is Us educates people that overweight people don’t just sit in a corner eating themselves into oblivion. The food is the symptom, it’s not the issue.

As you put the food down, the issues come up. And that’s what we need to be talking about. She stated, and that’s why, “We create art and movies and television, because someone somewhere needs to know that they’re not alone.”

One of the most common problems that obese people face is that  they start hating themselves because of their body. Metz revealed during her amazing transformation that she never stopped self-care and said crying wouldn’t help you in losing weight. It can make your condition worse.

For herself, maintaining a healthy lifestyle is a day-by-day challenge. “Some days I’m like, ‘Oh, I’m definitely eating my feelings.’ And then some days I’m like, ‘Yeah, when my heart is full, I’m not hungry.’ Right, so there’s those kinds of thoughts, like, ‘Oh, what is the psychology behind it?’ So, I don’t know. Do I wanna take care of my body and live a healthy life? Absolutely. But that doesn’t mean that you can’t do it at an unconventional size.”

Set your own pace and develop a fitness routine according to your limits.

“I just have to be very clear,” she said, “Whether or not I lose weight or stay the same, it’s purely a choice of mine for health. Not because I think that plus size, curvy, voluptuous, big bodies aren’t attractive—because I think they’re awesome and sexy.”

More recently, Metz made an appearance on The Ellen DeGeneres Show and opened up about her character’s sudden decision to undergo gastric bypass surgery. The talk show host wanted to know how Metz intended to lose weight fast enough to reflect the “quick fix” that comes with the weight loss surgery.

“It’s a fast fix, and it’s not always the right answer,” Metz agreed.

Chrissy Metz lost a 100 pounds of weight by:

“I don’t have a weight or a size [in mind],” she told People. “It’s really going to be about how I feel when I look at myself. I do want to lose weight. Physically, I really am interested in just feeling better and not having to be put in a box. I don’t want to be limited by anything.”

In light of the body-positive movement, she wanted her fans to know that in no way was the whole Chrissy Metz weight loss contract simply a disguised effort to conform to the media’s often unrealistic beauty standards. She reiterated that she has zero intentions of “selling out the big girls,” and that the process is “purely a choice of mine for health.”

As we follow Chrissy’s trajectory, a larger change in her weight loss is definitely coming up soon!

How old is Chrissy Metz?

American actress Chrissy Metz was born on September 29, 1980 in Florida, USA. She was born officially as Christine Michelle Metz. The actress is known for her roles in This Is Us (2016), Breakthrough (2019) and Sierra Burgess Is a Loser (2018).

How much does the actress who plays Kate on this is us weigh?

Does Chrissy Metz have a boyfriend?

‘This Is Us’ Star Chrissy Metz found love in her messages, the This Is Us star revealed she met her latest boyfriend on Instagram DMs according to People magazine. “As the kids say, ‘He slid into the DMs,’” the 38-year-old said on The Wendy Williams Show.

Who is Chrissy Metz husband?

What nationality is Chrissy Metz?

Metz belongs to American nationality. Metz completed her graduation from Buchholz High School. She was raised by her mother, step-father along with her two siblings and two half-siblings.

How old is Kate on this is us?

Kate Pearson is the character Chrissy Metz plays on This Is Us.

Where does Chrissy Metz live?

Chrissy Metz was born to Denise and Mark Metz in Homestead, Florida. She spent her formative years in Japan, where her father was stationed. The family later moved back to Gainesville, Florida, where she attended elementary, middle, and high school.

Interesting Facts About the U.S. Economy

What Are the Easiest Ways to Consume CBD?