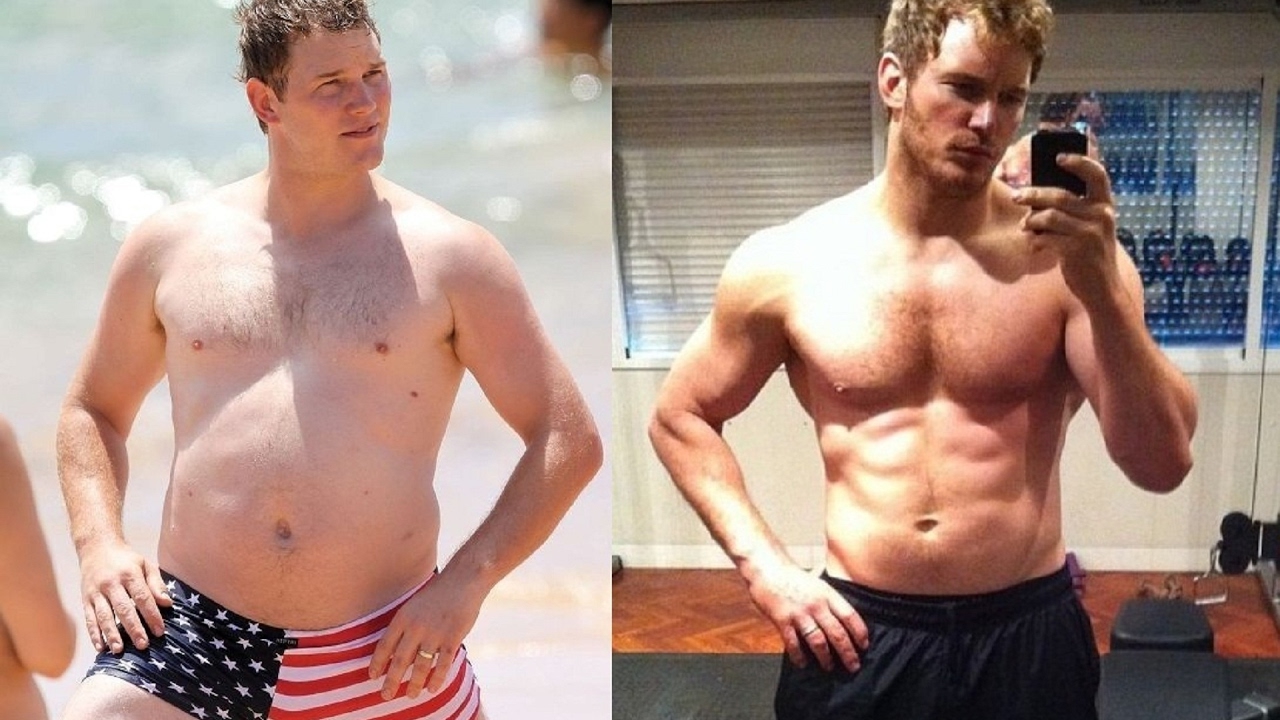 Before he auditioned for the movie: Guardians of the Galaxy, Chris Pratt weighed around 300 pounds. So what changes got him the lead role of Peter Quill, the Star-Lord? In essence, Chris Pratt’s weight loss was #goals after combining an intense workout regimen designed by his trainer Duffy Gaver and a diet plan created by nutritionist Phil Goglia!

Chris Pratt wanted to pack on more muscles to play a super hero but he also wanted to be leaner and fitter. He trained for 5 months under Duffy Gaver with incredible discipline, working out 4-6 sessions per week. To start with, he practiced bodybuilding workouts for 2 months. Then for the next two months, he concentrated on both bodybuilding and conditioning. During the last month, he focused on conditioning (including mountain biking and swimming) and other cardio workouts.

The following is his Guardians of the Galaxy Workout:

His diet was almost mostly Paleo, as Pratt had to give up most carbs. The staples of his weight loss diet consisted mainly of protein-rich foods such as steak, fish, chicken breast, whole eggs, and low-carb foods like brown rice, sweet potatoes, broccoli, spinach, oatmeal, and berries. Pratt cut out dairy products and instead focused on foods containing healthy fats like avocado, nuts, coconut oil, and grass-fed butter.

Chris Pratt’s diet was also focused on increasing his metabolism. Therefore, his diet was high in calories, to keep up with his intense routine designed by his trainer, Duffy Gaver. As his workout was grueling, recovery through diet was of utmost importance. Trainer Duffy Gaver also took the help of a top nutritionist, Dr. Philip Goglia to show Pratt how eating more at the right time actually revs your metabolism.

After creating his custom diet with Dr. Goglia, Chris Pratt upped his caloric intake to 4,000 calories a day. Chris Pratt focused on cutting out junk food, drinking lots of water, and as he mentioned in his famous Instagram post: ”giving up beer entirely” was the way to go.

It wasn’t an easy road either because in order to lose weight, Chris Pratt knew he had to change his ways. He remembers thinking:

When I was way out of shape, the idea of using whitening strips on my teeth seemed terrible. I have to do that every day? I’ll never do it. What you want is instant results when you’re out of shape. You want your teeth whitened in 45 minutes with the use of lasers. But when you’re in shape, you know it’s the result of doing a little bit every day. Moments aren’t just moments. A moment might be a week or a month. So instead of Boy, I’d love to eat this hamburger right now, I’m considering a little further into the future. I’m thinking, I eat that hamburger and that’s 1,200 calories, and I’m gonna work out tomorrow and lose 800 calories. I may as well eat a salad here, still do that workout, and then I’m actually making progress.

Chris Pratt’s weight loss history keeps fluctuating throughout the years, shifting from being healthy to unhealthy sizes for the sake of a movie or TV role.

In 2012, Pratt got into amazing shape for the Oscar winning film, “Zero Dark Thirty.” To play a Navy Seal, Pratt told People he “was doing 500 push-ups a day, working out at the gym, but with no food, and I tore my body apart … I felt terrible afterwards, had to get shoulder surgery, and I wore myself down doing that because I didn’t have the proper coaching.”

At the film’s premiere months later, Pratt told E! Online: “I was about 50 pounds or 40 pounds lighter than I am now. I worked out really hard and I cut out everything  bad for me for a long time and I just focused on trying to become a believable Navy SEAL.”

In 2013, Pratt says he packed on 60 pounds where he co-starred alongside Vince Vaughn.

“The first 20 pounds was sympathy weight because my wife was pregnant,” Pratt explained to SheKnows. “I was gaining weight as she was gaining weight … The other 35 pounds I did just by declaring that I was going to do it. And then my rule of thumb became: ‘If it’s there, eat it.’ And then I would order two entrees at every meal. I would always have dessert ,and I would drink the darkest beer on the menu.”

In an interview with Entertainment Weekly in 2014, Chris discussed his weight issues he battled. He attributes his first real weight gain to his now ex-wife’s cooking, saying ‘Anna’s [Faris, who you might know from Scary Movie] favourite thing to do is fatten me up. It’s like I’m little Hansel and Gretel out in the woods. I swear she’s gonna push me in an oven one day”.

After losing 60+ pounds in 6 months Chris Pratt’s weight loss news was creating headlines everywhere and it turned out to be the best promotion for the movie: “Guardians of the Galaxy.”  Here’s how he did it: “Three or four hours a day of just consistent, ass-kicking hard work.” the star explained to Men’s Fitness.

Although he was the most famous back then for playing Andy Dwyer in the sitcom Parks and Recreation, Pratt who weighed around 300 pounds went to audition for the Marvel movie. Marvel hooked up Pratt with personal trainer Duffy Gaver and nutritionist Phil Goglia. Goglia revamped Pratt’s diet, hiking his caloric intake to 4,000 calories a day and adding lots and lots of water—one for every pound he weighed.  “I was peeing all day long, every day. That part was a nightmare,” Pratt said in our cover story.

Christ Pratt has had a lot of ups and downs with his weight loss but today, he seems more consistent than ever. Chris Pratt maintained his weight loss by saying it’s all about balance now. Despite his struggles with dieting, he seems to have a pretty healthy outlook:

“My diet is now a bit more relaxed because I’m maintaining and not cutting foods out, so I can mix it up a bit. Although it’s still mostly natural, wholesome foods.”

Things You Need To Know For Weight Loss.