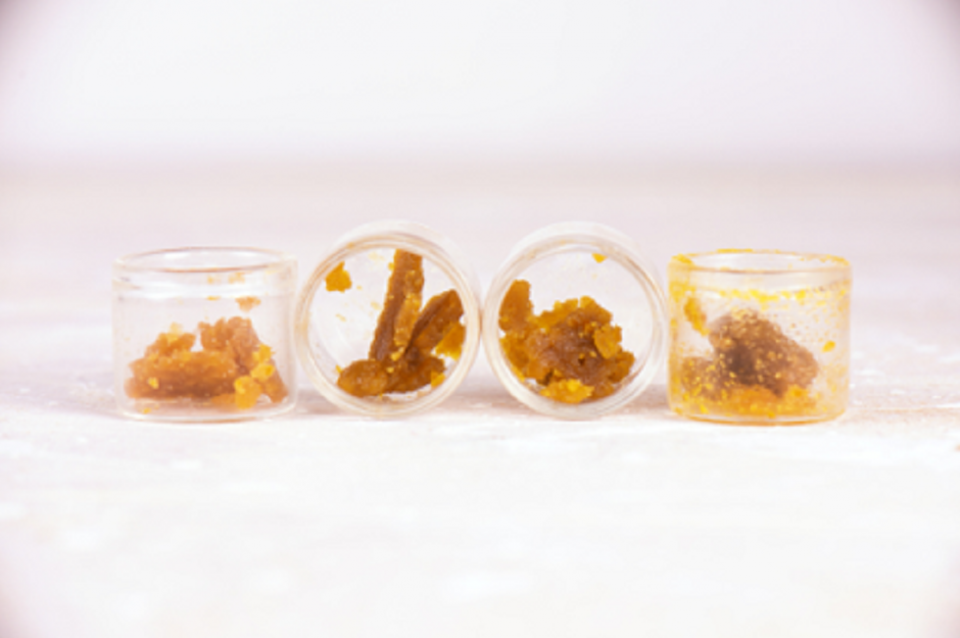 Cannabis concentrates are what the name suggests: substances with highly concentrated quantities of cannabinoids. Unlike raw flower, concentrates can contain much higher amounts of THC and CBD, which can be useful for users who have developed a high tolerance to weed and want to experience intense effects. Medical users also tend to gravitate toward concentrates because many find it easier to manage their conditions with higher dosages of certain cannabinoids.

The name “shatter” evokes brittle glass — which is exactly what the concentrate in question resembles. Shatter tends to be translucent, even transparent, ranging in color from honey-amber to dark yellow like olive oil. The consistency of shatter can vary as well; though most is brittle and does shatter when bent, other shatter products have a snap-and-pull quality like taffy. In truth, users interested in high doses of THC should look for shatter that is more taffy-like, as this is a good indication of THC content.

Shatter, like most concentrates, is best consumed as a dab. Dab rigs are specialized pipes that super-heat concentrates and collect the vapor they emit for users to inhale. Users can buy dab rigs from cannabis dispensaries in California or in some online paraphernalia stores. However, dabbing is an advanced cannabis technique best reserved for those with especially high tolerance. Those interested in using concentrates but not dabbling with dabbing might break off a small piece of shatter and roll it into a joint or sprinkle it atop a pipe or bong.

Budder has the texture of a room-temperature stick of butter: slightly soft and quite oily. Budder’s hue ranges from a bright sunshine yellow to orange. Beginner concentrate users often prefer budder because its consistency makes it easier to spread onto joints or blunts.

Badder, or batter, is similar in consistency to budder but slightly less oily and easier to handle. As the name suggests, badder has the texture of a good cookie batter — it will crumble if handled too harshly, but it doesn’t feel too sticky or oily on the fingers. Badder is most often wrapped into joints and blunts, but unlike budder, it can be broken up for easy dabs.

Another variation of budder and badder, crumble has much less oil and is much more brittle and likely to fall apart. The best comparison for texture is the streusel topping that goes on some muffins, but some crumble does come in larger chunks like a dry piece of cake. Like badder, crumble is easy for concentrate beginners to handle, and it can be used in almost every manner, especially dabbing.

While most people might think of dry, granulated sugar, this concentrate instead refers to a much wetter substance, like brown sugar with some extra molasses left in. Sugars typically don’t have a uniform texture; some pockets can be dryer while others much wetter, and they can vary in color, as well, from a bright yellow to a deep, burnt amber.

The name sauce is given to sugars that are particularly wet, like caramels that aren’t done cooking or old honey that has started to form crystals. Sauce is almost always darker in color, like amber or mustard, and it is all but impossible to handle with fingers alone. Users will need a dabbing tool, which looks like a small, slim metal spoon, to transfer sauce into rollies or a dab nail.

Crystalline is a crystallized compound, like a small chunk of quartz. Crystalline is almost always white or clear, and it can vary in density from a bit crumbly to hard-as-stone as well as in size from large rocks to powder. Unlike other concentrates, crystalline is most often ingested orally, in cooking oils or in capsules, though the concentrate can be smoked in a dab rig.

After gaining some familiarity with the basic concentrates available in cannabis dispensaries, users should have more power to make decisions about their cannabis use.

Tired Working From Home? Here Are Tips to Relax Your Strained Eyes From The High Screen Time.

How to Write a Halfway House Business Plan

Marijuana Facts and Myths Worth Knowing

Hearing Aid Types: Which is Best for You?