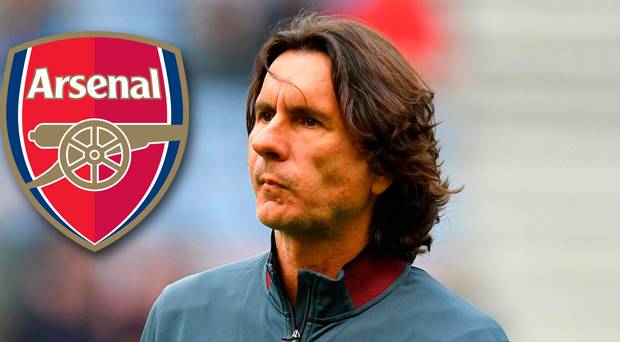 Since long-serving Arsenal manager, Arsene Wenger announced that he is going to step down after 22 years at the helm, speculation has been rife as to whom will succeed him.
The latest name to pop up is that of Liverpool assistant manager Zeljko Buvac. Bulvac has worked with the lively Jurgen Klopp for seventeen years. Still, he is a surprising choice, given that he does not have much experience as manager.
Still, according to Pravda BL, the reliable news outlet that was the first to break  news that Klopp was set to join Liverpool in 2015, the tactician is ready to part ways with his mentor and forge his own path as a manager.
According to the news outlet, a source has revealed to them that Buvac has agreed terms with Arsenal. He is currently taking time off from his duties at Liverpool, and this could serve to further fuel speculation that he is headed to North London.
Klopp once described his assistant as “The Brain” of his coaching staff. Buvac was on duty during last Saturday’s goalless stalemate with Stoke City. He however will not be present during Liverpool’s Champions League showdown with Roma.
Liverpool issued a statement saying that the German coach remains an employee of the club. The statement added that he is spending time away from the club due to personal reasons.
Buvac, who is from Bosnia, worked with Arsenal head of recruitment, Sven Mislitant during their time with Klopp at Borussia Dortmund.
The Bosnian finished his playing career in 1998 with German club SC Neukirchen. He then took charge of the club. After three years at the club, he left to become assistant manager at FSV Mainz 05, another one of his former clubs. During his seven years at the club with his friend Jurgen Klopp, they got promoted to the Bundesliga, and later qualified for European competitions.
The pair later left to join Borussia Dortmund. At BVB, the pair won back-to-back league titles in 2011 and 2012. They also won the DFL-Supercup in 2008, 2013, and 2014. They also appeared in the 2013 Champions League final.
Other managers who have been linked with the Arsenal hotseat
Buvac is only the latest in a long list of managers who have been linked with Arsenal since Arsene Wenger announced his decision to leave the club. Other high profile names who have been linked with the North London club include:
Massimiliano Allegri
The Juventus manager is currently engaged in a thrilling two-horse race with Napoli for the Serie-A title. If he emerges winner, it will be his fourth league title at the helm of the Italian giants.
Allegri has been linked with Arsenal in the past, with a multitude of Gunners faithful taking to Twiter to profess their desire for him to join the club.
His teams are known for their defensive solidity. This makes him especially appealing to the Arsenal fanbase, considering the fact that their team Is known to leak tons of goals.
Diego Simeone
Atletico Madrid are set to face Arsenal this week in the second leg of the UEFA Europa League semifinals.
Manager Diego Simeone extended his contract with the Spanish club to 2020. However, his aggressive style of football could convince the Arsenal board to make a play for him.

Desire: A Deep Feeling Inside

Oh he is getting replaced

Wenger’s time is up. They are looking for a new manager.