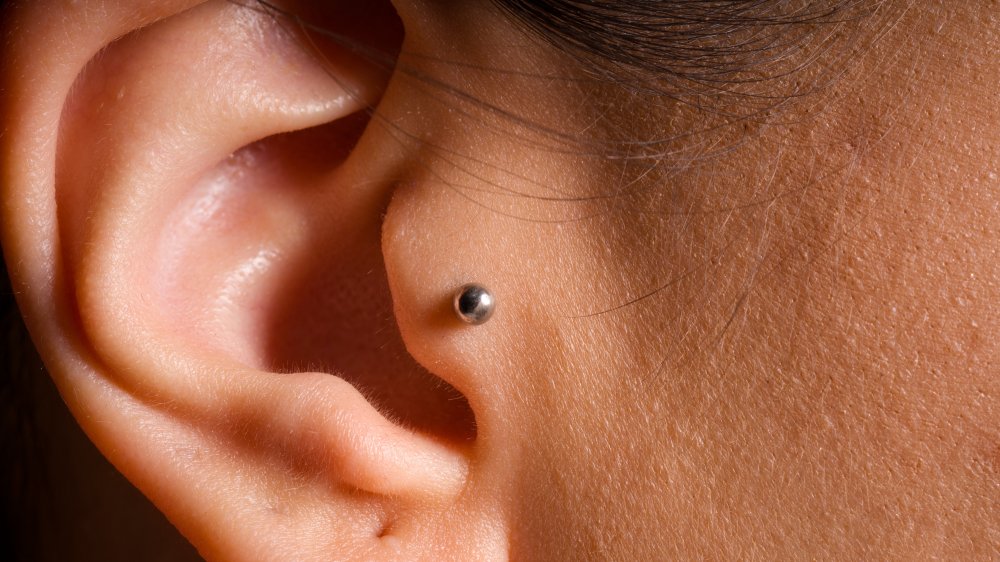 When you get a tragus piercing, the tragus (which sits over the ear canal directly above the lob) is penetrated through the ear canal to wear the jewelry. This is done by piercing the small gauge hollow piercing needle in the shape of either captive bead rings, barbells or earrings studs.

While it has primarily been women in the United States to wear pierced ears, men in some groups have worn them as well. Sailors, for instance, used a pierced earlobe to indicate that the sailor had sailed around the world or had crossed the equator; another legend says that a pierced ear would improve a sailor’s eyesight, and that if a sailor was found washed up on a shore, his gold earring would pay for his burial. In the late 1960s, men began to wear earrings thanks to the influence of the gay community and the hippies. In the 1970s, punks began piercing their own ears and later, other male musicians began wearing earrings as well, leading to a fashion among rock stars, rappers, and basketball players.

The popularity of tragus piercings, however, began much later. Popularity only increased around 2005, according to one BBC report. The common types of tragus jewelry are tragus hoop rings (both with and without the ball), tragus barbells, studs, and the spiral.

The cartilage famously varies in its healing times, but most often the tragus heals between 8 weeks to 3 months.

Sometimes cartilage piercings, such as the tragus, can take much longer (like a year). So it’s important to keep an eye on your piercing and talk to a piercer if you’re unsure you’re fully healed. Keep in mind that the inside of a piercing takes longer to heal, so even if it looks healed externally, it might still have some healing left to do. Also, if you’ve got your tragus pierced, then keep an eye out for the signs and symptoms of an infection so that it can be treated and managed.

Sometimes people get confused between the differences in healing and infections because they feel the same for 2 weeks. If problems go beyond your 2 week grace period, you can call it a tragus piercing infection.

For around 2 weeks, it is typical to experience:

These are all typical expectations of the body beginning to heal the wound. Although it can sometimes take around 8 weeks for the wound to fully heal, these symptoms should not last more than 2 weeks.

The tragus doesn’t have many nerves in it which means that, compared to other piercings, it’s not very painful. If you’ve ever gotten a helix, auricle, conch, or other piercing in the ear cartilage, you should know what to expect pain-wise.

As with any cartilage piercing you’ll hear a slight ‘popping’ sound when the needle goes through which is normal – it is cartilage after all. Afterwards, you’ll more than likely have some swelling and soreness (you know, from the hole you’ve just put in your ear) for around three to five days or upto 2 weeks.

Tragus piercings range between $30 – $50. You’ll also have to buy the jewelry which can be expensive. Metals that are safe for sensitive skin, like stainless steel or 14k gold will be more expensive, but they will encourage happy healing; cheaper metals run the risk of being rejected by your body.

Make sure that you find an experienced piercer. Expert piercers will create a more pain-free experience, and they’ll use tools free from bacteria. Make sure that your piercer uses a needle, not a piercing gun. Piercing guns harbor bacteria, and the blunt force they use to push the jewelry through the ear can contribute to cartilage bumps and other healing complications.

Following these aftercare steps can advance the healing:

Only touch your piercing after thoroughly washing hands with antibacterial soap. Never remove or change the jewelry until the piercing has fully healed.

Clean the piercing regularly using a saline solution. Clean it twice a day (or three times to be extra cautious) with a saline solution, or you can make your own salt water solution by boiling water, adding salt to it and letting it cool. Apply the solution to the area by soaking cotton wool or an ear bud in it and cleaning the area.

Avoid products that may irritate the wound

Products that may irritate the piercing wound include:

In addition dont use ointments, which can create a barrier over the wound site, preventing proper air circulation:

A warm compress is soothing on a new tragus piercing and can help reduce redness and swelling and even encourages the wound to heal faster. A clean towel soaked in warm water can be helpful. Alternatively, making a warm compress from chamomile tea bags can be very effective and therapeutic.

Use an antibacterial cream

Use a mild antibacterial cream to kill off the bacteria that cause infection.

Make sure to change bed sheets regularly to reduce the number of bacteria that can come into contact with the ear while sleeping. Sleep on the side that is not pierced, that way the wound won’t hurt or press into sheets and pillows.

Keep hair tied back so it cannot get caught in the piercing and be careful when dressing or brushing hair.

Public swimming pools, the sea, the ocean or hot tub and even long showers can all increase the risk of infection.

While the wound on your tragus is healing it is best to avoid drugs, alcohol and smoking. They can delay the healing time. Maintain personal hygiene practices to minimize the risk of infection and help the piercing to heal faster.

Before deciding for tragus piercing in order to wear the tragus jewelry, it is important to identify the types of it.

1. Tragus ring (with and without ball)

The captive ball that looks like a bead fits into a small opening in the circle of the ring. The bead is slightly larger than this opening and has small indentations that correspond to the ring’s end-points making it fit snugly against it, thus completing the circuit of the ring. The ball is often held in place with tension or compression from the metal ring. Tragus rings with balls come in all different sizes and colors, as well as different gauges to really fit your piercing the very best.

Often one of the beads is fixed so that only one bead is used to install or remove the jewelry. Barbell threads are usually right-handed. They are called so because they resemble the barbells that are used in weightlifting. The type barbell which is common for this is the curved barbell which is in the shape of a horseshoe. It is a semi circle that is held in place with two small balls on either end of the half circle.

Infections can occur if you’ve committed any of the piercing sins listed below:

Infection may be present if a person experiences:

Some ear piercings have benefits such as relieving pain. The daith and tragus are roughly the same pressure point on your ear that acupuncturists use for patients who don’t want to take daily pain medication. They will place needles in ear cartilage to relieve migraine symptoms.
The story is that acupuncture activates channels in your brain that turn pain off. Thus, the daith piercing and tragus piercings have popular and inexpensive benefits.

The benefits behind ear cartilage piercings for migraines is similar to the benefits behind acupuncture. Acupuncturists believe that electricity, nerve endings, and pressure points in your body can be stimulated to treat pain. In the case of tragus piercings, the benefits hinges on the vagus nerve. This is the longest of the 10 nerves extending from the bottom of your brain into the rest of your body.

Therefore, people who get piercings to treat migraines believe that puncturing the daith or tragus provides vagus nerve stimulation.

7 Best Ways to Shop Fashion Apparel Without Leaving your Home