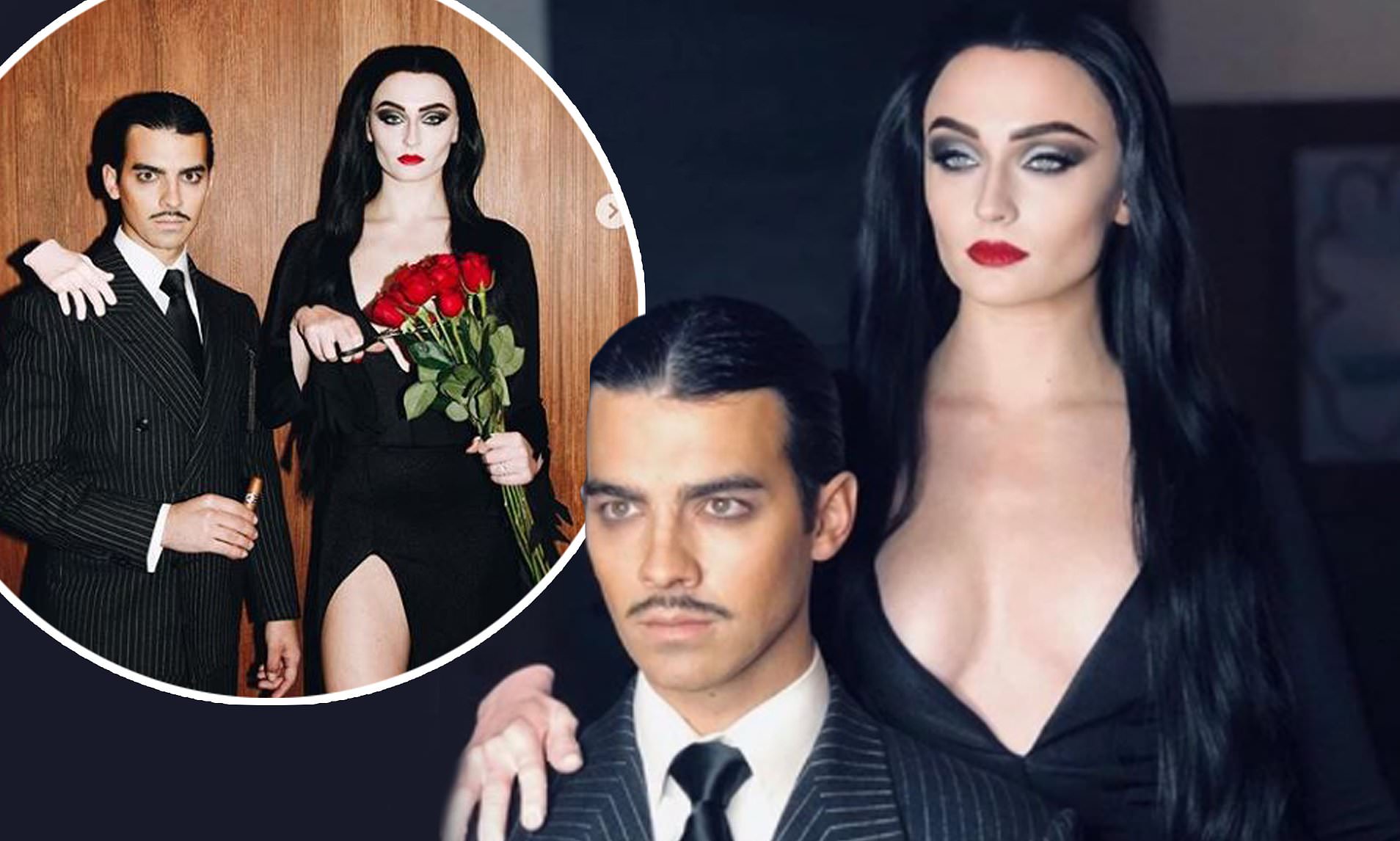 Halloween is on the horizon, and if you’re still wondering what to dress up as, you might want to look to the Addams Family for inspiration!

Family with Babies and Young Children

Family with Teens and Adults

In order to transform into the iconic character, Turner wore a figure-hugging black gown with a plunging neckline and high leg slit. She completed her look with a long black wig and dark makeup. As the gothic patriarch, Jonas donned a sleek pinstriped and slicked back his hair. He perfected his costume with a prosthetic hand on his shoulder to represent the character Thing.

The beautiful duo posted a photo of their epic costume to Instagram, captioning the shot, “Happy Halloween from Morticia & Gomez Addams.”

This Morning presenter Holly Willoughby, 37, showcased her cleavage as she channeled the infamous Morticia Addams and was swiftly inundated with compliments. The mother-of-three gave viewers a glimpse of her assets and confidently posed with her hand on her hip. The blonde beauty from This Morning gave a sultry pose to the camera, ensuring she was in the character of Morticia from the Addams Family

Her dress perfectly highlighted her bust with a sweetheart neckline and boasted statement shoulders along with a floor-length pencil skirt. The beauty teamed her daring frock with a pair of complementing black heels and disguised her usually blonde mane under a raven black wig that she styled over to one side.

She also opted for a long black wig and dark make-up and stood out with her red lipstick.With the help of stylist Angie Smith, the presenter transformed into Morticia Addams for the spooky special of Celebrity Juice. And didn’t she look fabulous?

Her floor-length latex dress is by William Wilde and features a flattering sweetheart neckline, figure-hugging fit and super shiny finish. With the addition of a long black wig and dramatic make-up, Holly looks just the part!

Even if you’ve seen a lot of celebrity families dress up like the Addams family during Halloween, one family that takes the holiday seriously is Nicole Richie’s. Not only does the fashion designer lavishly decorate her home with skulls and pumpkins, but she gets her whole family in on the costume fun. Over the years, we’ve seen Nicole pay tribute during Halloween to A Clockwork Orange with Joel Madden and dress up like a cat with little sister Sofia Richie, and in 2014, she and her mini mes, daughter Harlow and son Sparrow, channeled Cruella de Vil and the 101 dalmatians. We can’t wait to see what she comes up with this year!

Kate and her husband, Jamie Hince, got decked out in their Addams family best!

Wearing spooky white face paint and a shiny black wig, Moss channeled Morticia Addams quite accurately. She even sported red lipstick and oversized fake lashes, a far cry from her normal barefaced look. Sporting the head-to-toe black if not for Halloween the fashion look could pass as a normal, everyday Kate Moss outfit. Jamie Hince sported far less makeup but looked just as convincing as Gomez Addams in his maroon overcoat and side partition.

Is there a second Addams Family movie?

If you’re wondering how many Addams family movies are there, here it is: Addams Family Values is a 1993 American comedy film, the sequel to The Addams Family (1991).

Are any of the original Addams Family still alive?

Time has been less gracious to the cast. Only four of the original eight members are still alive. Sadly, Blossom Rock, who played the role of Grandmama Addams, died in 1978, at age 82. Lumbering Ted Cassidy, who played Lurch and Thing (the hand), died after open-heart surgery in 1979, at 46.

Ken Weatherwax, who played the original child character called Pugsley on The Addams Family television series in the 1960s, has also died at the age of just 59. It was stated that Ken Weatherwax died of a heart attack at his Box Canyon, California, home over the weekend, said Joey D. Vieira, his half brother.

Is Morticia Addams a witch?

In the Addams Family, Morticia is the wife of Gomez Addams and mother of Wednesday (played by Christina Ricci), Pugsley and Pubert Addams. The character originated in the Charles Addams cartoons for The New Yorker magazine in the 1930s who was described as a witch. Morticia was meant to be slim, with extremely pale skin and long flowing straight black hair.

Is Gomez an Addams human?

While Pugsley and Wednesday are human as well as Grandma and Morticia and Gomez. While Lurch is a Frankenstein look-alike sort of monster with this he could be half Adams being an amalgamation of sorts that would lead him to be some sort of human.

Why was Addams Family Cancelled?

Like a lot of cult classics, the Addams Family television show turned out to be more successful in syndication than it ever was during its original run. Based on Charles Addams’ cartoons, the show had aired on ABC from September 1964 to September 1966, finishing in 23rd place in the ratings its first season, behind the competition was CBS’ similarly ghoulish sitcom The Munsters. Today, 25 years after its debut, the show is still being shown in more than 30 markets across the country, watched by hundreds of thousands every week.

Unfortunately, the Addams Family was canceled after just two seasons. This was b cause The Munsters debuted around the same time The Addams Family did, the public quickly got burned out on monster sitcoms. At least, that’s what the networks believed. Both shows got the axe at the end of their second seasons as they also canceled The Munsters.

Who’s hand is thing in the Addams Family?

In the television series, Thing from the 1960s is a hand. Strictly speaking, a disembodied forearm, since it occasionally emerged from its box at near-elbow length—was usually played by Ted Cassidy, who also played the lugubrious butler Lurch.

Is there a new Addams Family movie coming out?

Does Netflix have the Addams Family?

Netflix US has streamed The Addams Family before. … You can stream the second movie, Addams Family Values with a Starz subscription, but you’ll have to look to a video-on-demand service for the first movie this year.

Is The Addams Family on Hulu?

Yes, You Can Watch ‘The Addams Family’ on Hulu Right Now.

When you’re little(or an adult for some of us), Halloween is all about heading outside and trick-or-treating until your candy bag is overflowing with tons of treats. Including spin-offs to the classics like The Addams Family, Hulu is definitely your hub for all things Halloween to watch during the holiday!

5 Surprising Benefits of an Air Mattress

Add To Your Cartilage Piercing With These Tips

Dermal Piercing: All The Questions In Your Head, Answered!