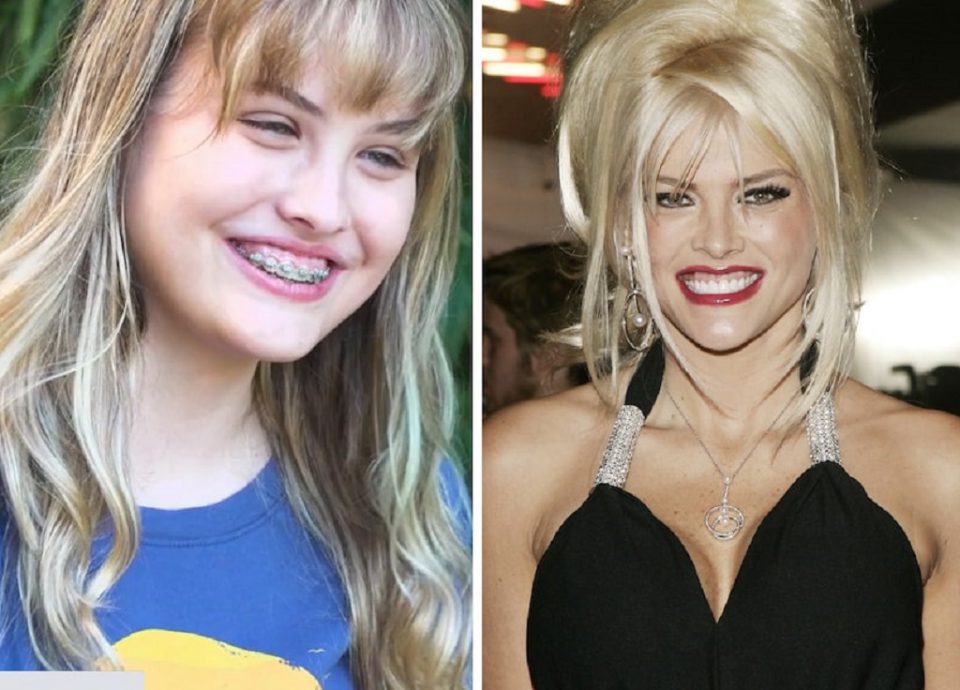 The “ Anna Nicole Smith Daughter Dannielynn Birkhead ” phenomenon revolves around a teenage girl who makes rare appearances and gets photographed because her mother was the famous playboy magazine model Anna Nicole Smith.

1. The daughter of the late Anna Nicole Smith, Dannielynn Birkhead in 2021:

Anna Nicole Smith died 14 years ago when she was a young mother to little Dannielynn (now 14), born only a few months before her mother’s death. Since then, the teenager’s appearances have been extremely rare. But Dannielynn was out on Saturday, May 1, 2021, at the Kentucky Derby Horse Race at Churchill Downs Racecourse in Louisville. Accompanied by her father Larry Birkhead, the young woman caused a sensation looking like her famous mother: same baby face and angelic smile, in an elegant blue suit.

Dannielynn leads a normal teenage life. “She goes to school like all the other kids, she’s a Girl Scout,” Larry told The Steve Harvey Show in the summer of 2016. Dannielynn’s dad admits it can be tough and said, “I make it as normal as possible.

Dannielynn graduated from seventh grade in the summer of 2019 and spends time with her father a lot, whether it’s going to Walt Disney World or watching a movie together.

2. Dannielynn Birkhead can finally grow up serenely, after a tragic start to life:

Little is known about Dannielynn’s life now, far from show business. In 2020, her father talked about her to People, saying: “She’s fun and not afraid of anything just like her mother. She’s a great kid. I’m happy to have been able to spend all the time I spent with her. We spend a lot of time having fun. ”

The girl’s life started off in the worst possible way and there are a lot of details about this.

When Anna Nicole Smith had just given birth to her, she received a visit from her son Daniel (20 years old) in her hospital room. The latter came to meet his little sister, but the young man collapses in the room and dies just after. An autopsy will tell us later that he had succumbed to a drug overdose.

3. Dannielynn Birkhead’s paternity battles started when she was a baby:

The little girl, still a baby, is not at the end of her troubles.

With the sudden death of her mother, it is not known who her father really is. While her mother had specified on the birth certificate that lawyer Howard K. Stern, who is then her companion, is indicated as being Dannielynn’s father.

But after a court appeal from three other men who claim this paternity, it turns out that it is ultimately Larry Birkhead, the photographer who is identified as being the true father, as the DNA test revealed in 2007.

The publicly available DNA analysis Bahamas is able to state that Larry Birkhead is the father of Dannielynn and the baby’s papers are changed according to this new identity and her mname is changed from Stern to Birkhead.

4. Soon, Dannielynn will be raised by her dad Larry Birkhead:

It was alongside her father that Dannielynn was seen on May 1 during a Kentucky Derby horse race at Churchill Downs racecourse in Louisville.

Each year the father-daughter duo have a tradition of going to the Derby.

And the first thing that jumps out when you look at this 14-year-old and her blue eyes is her striking resemblance to her mother Anna Nicole Smith. Same doll’s head, same tender and naive eyes, same broad smile, literally her spitting image!

For this outing, the young woman displayed an elegant look and wore a sequined mask. The love of rhinestones and sequins as a heritage?

“It’s that time of year again. The @kentuckyderby weekend is here! Even though our favorite event, The Barnstable-Brown Party, won’t be back until next year, we’ve decided to head to Churchill Downs Racecourse in preparation for The Kentucky Derby, ”Birkhead wrote on Instagram before. the big event,

Birkhead shared photos of himself posing with his daughter on the steps outside a building in Churchill Downs and a selfie where Dannielynn wore a rhinestone mask perfectly coordinated with her JOVANI costume. He added that Dannielynn chose the outfit because she “wanted to wear something completely different from what she had in the past”.

“Guess that means more” little girl “dresses ?? He said, adding that Dannielynn also had some fashion opinions to share with him. “She cleaned up the chocolate brownies, ice cream and nachos while criticizing my outfit. “

5. Walking in her mother’s shoes with modeling:

She had indeed posed during a campaign for the Guess brand when she was only 6 years old.

Anna Nicole Smith, once the face of Guess in the 90s, her daughter Dannielynn made her debut as a model with the same brand for a Guess Kids campaign.

However, we do not know if she is continuing her activity as a child model. According to Wikipedia, her modelling career has ended with just that one gig.

6. Despite her famous mom, Dannielynn has had a fairly normal upbringing so far:

Her dad, who always wanted to raise his daughter like an “ordinary kid,” got on his knees and fed a pony with his daughter in 2010 as she watched her smile at the 138th Kentucky Derby on May 5, 2012.

“We visit and I tell Dannielynn stories about her mother. I’m not wrapping it up. I’m saying there are things your mom did and you know I’m trying to teach her, “Larry told Entertainment Tonight in 2015.” My goal has always been to keep Daniel and Anna on her mind. and let him know who they were without overdoing it.

1. How old is Dannielynn now?

Dannielynn’s father is Larry Birkhead, a famous photographer who is now 48 years old.

Her parents met at the Kentucky Derby in 2004, but the romance was kept silent. “No one ever knew once I was her boyfriend,” Larry said on a 20/20 special, which aired in 2017. “The whole time we dated, if you watch the whole video, I’m in the back carrying my camera bag… she didn’t want me in the spotlight.

However, legal hysteria over the true identity of Dannielynn’s birth father ensued after her delivery in 2006.

In his 20/20 interview, he said Anna Nicole five months after her pregnancy and left him for the Bahamas. When the baby was delivered, Dannielynn’s birth father was wrongly listed as attorney Howard K. Stern.

3. What is Dannielynn’s net worth?

She was named as the sole heir to her late mother’s estate in 2008, although Dannielynn’s exact net worth is not public information.

However, attorneys representing Dannielynn lost an attempt to win $44 million of the vast fortune that Anna Nicole J. Howard Marshall’s ex-husband left behind, according to a 2014 report by the BBC News.

After the billionaire died in 1995, he left his fortune of 1.6 billion dollars to his son E Pierce Mashall, who is also now deceased.

“If Dannielynn is to inherit anything from her mother to which she was entitled, so be it, but it’s not like we’re waiting for something to happen,” Larry said of the inheritance ordeal in his 20/20 interview in 2017.

Anna Nicole Smith’s will was created by lawyer Eric Lund and executed in Los Angeles, California on July 30, 2001.

The American Playboy model named her son Daniel as the sole beneficiary of his estate, specifically excluded other children and named Howard K. Stern executor of the estate.

The will shows personal property valued at $10,000 and real estate valued at $1.8 million, with a mortgage of $ 1.1 million, at the time of her death.

Larry Birkhead was listed as an interested party in the estate after an application for probate of Smith’s will was filed in Los Angeles County Superior Court.

Computools`s Position In The Outsourcing Market: Stats And Background