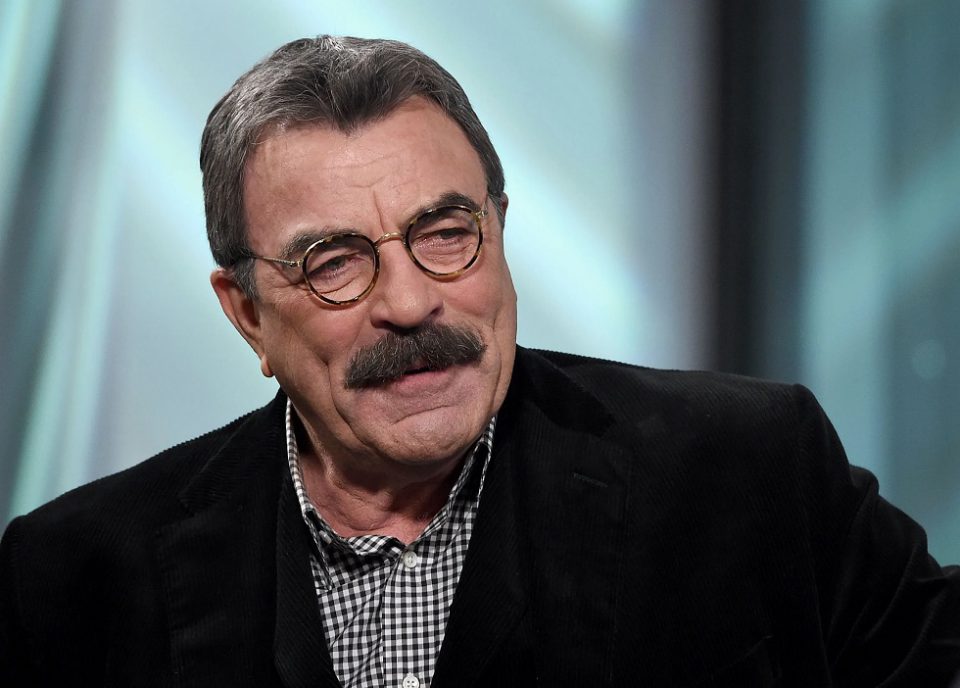 Arguably the most developed (mustache and career) actor, Tom Selleck has done it all: from commercials in the 1960s, to primetime guest spots in the 1970s, Magnum, P.I. in the 1980s, to Friends, Jesse Stone, and Blue Bloods.

The iconic actor has always had an approachability that kept him equally popular with male and female viewers for half a century. His mix of matinee idol looks and self-deprecating “regular guy” helped him successfully crossed over to film, with hits like 3 Men And A Baby (1987) as well as Western-themed short films and movies like Last Stand at Saber River (1987), Monte Walsh (2003), and more.

Here are some fun facts about the Magnum, P.I actor who was once up for the role of Indiana Jones, and up for military service and even suited up for the Detroit Tigers:

Tom Selleck: Discover His Insanely Rich Life With These 15 Facts!

1. Tom Selleck was once on the Dating Game:

Born on January 29, 1945 in Detroit, Michigan, Tom Selleck grew up in Los Angeles and earned a basketball scholarship to the University of Southern California, where he also entered a management training program for United Airlines.

While he was a talented athlete, Selleck always wanted to be an artist and so he began working as a model and was later able to secure commercial spots, including one for Safeguard deodorant, where co-star Teri Garr announced:

“He smells just the way a man should smell—clean.”

Before this type commercial success, in 1965, Tom Selleck appeared on The Dating Game, at the time a popular way for aspiring actors to gain exposure. (Steve Martin, Arnold Schwarzenegger, and Andy Kaufman all made appearances.) Despite his future status as a screen hunk, Selleck lost on the show—twice. Somewhere, there are two women in their 70s wondering what they were thinking.

2. Some of his scenes on Friends had to be re-shot:

Tom Selleck focused on his film career after Magnum, P.I. ended in 1988. But he returned to TV in 1996 as Dr. Richard Burke, the much-older boyfriend of Monica Geller (Courteney Cox) on Friends.

The superstar was such a hit with the live studio audiences in his ten episodes that all of his entrances had to be re-shot, due to too much cheering. Tom scored his sixth Emmy nomination for the role in 2000, with a previous win for Magnum in 1984.

3. Tom Selleck served in the military:

The future actor was drafted during the Vietnam War after he joined the California National Guard in 1967 and was placed in the 160th Infantry Regiment, achieving the rank of sergeant and serving until 1973. At the time, Selleck was obliged to his contract with Fox. After serving his full six months term, he returned home in 1969 only to find out the studio had fired him. Later, Selleck was used in promotional material for the National Guard (thanks to his Superman type looks) and he also became a spokesman for the Vietnam Veterans Memorial Fund.

4. Tom Selleck made his way to Hollywood through actress Mae West:

Though he would continue to be cast in television commercials throughout the 1970s, Selleck’s first major big-screen role came courtesy of Mae West. The legendary actress hand-picked Selleck to play one of her “studs” in 1970’s Myra Breckinridge. Selleck credited West with helping him get noticed.

“Mae was a wonderful woman,” Selleck told The Morning Call in 1997. “I escorted her to a couple of premieres and she did hundreds of interviews where she mentioned me in the same sentence as Cary Grant.”

One of the most notable bits of trivia in Selleck’s career is that he auditioned to play globe-trotting archaeologist Indiana Jones in 1981’s Raiders of the Lost Ark. He got the job, but was forced to turn it down because CBS wouldn’t let him out of his contract to star in the private eye drama Magnum, P.I. That’s accurate, though it turns out that Selleck could actually have done both. Just as Magnum, P.I. was about to start shooting in Hawaii, a writer’s strike held up production, and Selleck adapted and found a way to work as a handyman to pay his rent until the show resumed. In addition to being forced to do this, Raiders started filming around the same time—in Hawaii so it would have been a huge blow to his self-esteem.

Another fact about Tom Selleck’s trivia is that the actor also turned down the lead role in 1985’s Witness, a drama about a cop who befriends an Amish family, which went on to star Harrison Ford.

6. Tom Selleck could have been a Volleyball Champion:

During the filming of Magnum P.I., Selleck often played volleyball with members of the Outrigger Canoe Club senior (over 35) team in Honolulu and was even named honorary captain of the U.S. Olympic men’s team in 1984. The actor agreed to pose shirtless for a poster because the proceeds would go straight to the athletes.

7. At first, Tom Selleck “despised” the role of Thomas Magnum:

When Selleck was offered the role of Thomas Magnum, he had already been in a string of failed television pilots.

While he was more than happy to be starring in a big network show, he told GQ in 2014 that he initially disliked how the role had been written. “I hated it,” he said. “He was James Bond-like. He was perfect. He had girls on each arm. He owned a Ferrari.”

Luckily, Selleck convinced the producers to play a character more in line with the downtrodden Jim Rockford in The Rockford Files, in which he had guest-starred. Producers agreed, and Magnum became more of an everyman character. The series ran for eight seasons.

8. Tom Selleck almost went pro with his baseball career for the Detroit Tigers:

Hall of Famer Mickey Mantle once said that he had “major league potential.”

Fans of Magnum, P.I. noted that Selleck was fond of wearing a Detroit Tigers baseball cap throughout the series, a nod to Selleck being a Detroit native. The actor was born and brought up in the Motor City in 1945 and lived there until age four, when his family moved to Sherman Oaks, California.

The actor is such a fan of the team that he joined spring training in 1991 as part of his preparation for a role as a baseball pro in 1992’s Mr. Baseball.

Selleck even played in one exhibition game against the Cincinnati Reds that April, striking out in the eighth inning.

In 1962, the 6 foot 4 feet Selleck was awarded a basketball scholarship to the University of Southern California.

10. Tom Selleck once again turned down an iconic role, this time it was Baywatch:

After wrapping up Magnum, P.I., Tom Selleck pursued a film career, including films like 1989’s Her Alibi and 1990’s Quigley Down Under.

He was also offered to make a TV comeback through Baywatch, the NBC series about lifeguards. Selleck passed on the role of Mitch Buchannon, which eventually went to David Hasselhoff. Some would say he wisely chose to make a  television comeback with a recurring guest spot on Friends and the police drama Blue Bloods, which is now in its 10th season.

11. His first TV role was on a Western — with Sam Elliott:

The handsome actor appeared in a commercial for Safeguard (with Teri Garr) and other brands, but his first TV acting role was as an ornery barfly on the CBS Western series Lancer in January of 1969.

Another mustache legend, Sam Elliott also appeared in that episode, though the two future stars didn’t have any scenes together. They reunited ten years later, this time as brothers, for the NBC miniseries The Sacketts.

The two mustache legends also co-starred, again as brothers, in the TV movie The Shadow Riders in 1982!

12. Selleck almost starred in Raiders Of The Lost Ark as well:

After an audition in 1980, Tom was offered the role of Indiana Jones in Raiders Of The Lost Ark by director Steven Spielberg and producer George Lucas. There was only one problem: he was about to begin Magnum, P.I. “They held the offer for a month, but the more they talked to the network (CBS), the more the network said no,” Selleck told David Letterman in 2016. He got a second chance (sort of) to play Indy when Magnum P.I. did a Raiders parody episode in 1988 — complete with leather jacket, fedora, whip, and snakes!

While filming the World War II-set film Lassiter in England in 1983, Selleck met and began courting actress and dancer Jillie Mack. The couple got married in 1987 — in a ceremony that was kept hidden from the media for nearly a month.

Their daughter Hannah was born 5 years later while Tom also has an adopted son from a previous marriage.

Selleck scored his first feature film starring role in the low-budget horror film Daughters Of Satan (1972). Just 15 years later, his comedy Three Men And A Baby (1987) was the highest grossing film of 1987 — while Magnum, P.I. was still a hit on TV!  He and co stars Ted Danson and Steve Guttenberg returned for the popular sequel Three Men And a Little Lady (1990).

Although he’s top-billed on Blue Bloods, Selleck doesn’t get the majority of screen time. And he planned it that way. Simultaneous to that show’s run, he’s been doing double duty as the star, producer, and screenwriter of the Jesse Stone TV movies. Before his death in 2010, creator Robert B. Parker wrote that Selleck “nails the character” and Emmy voters agree, nominating him for Best Lead Actor in a Miniseries or Movie in 2007. “I was dying to play him,” Selleck said in 2010. “(Jesse) has a lot of flaws, a lot of problems. That’s always fun for an actor. And I think it’s fun for an audience.”

Jesse Stone shares continuity with another iconic cop show.   In 2005, Selleck took on the role of alcoholic police chief Jesse Stone in a series of made-for-TV movies based on the Robert B. Parker novels. The Jesse Stone stories share continuity with Parker’s Spenser novels, which were adapted for TV in the 1980s as Spenser: For Hire. Sadly, star Robert Urich died before we could see a Spenser/Jesse Stone team-up. Coincidentally, Selleck and Urich had played partners in Bunco (1977), a failed pilot for a buddy cop series. Bunco creator Jerry Ludwig also wrote for Hawaii: Five-0 and Murder, She Wrote — two shows that share continuity with Magnum.