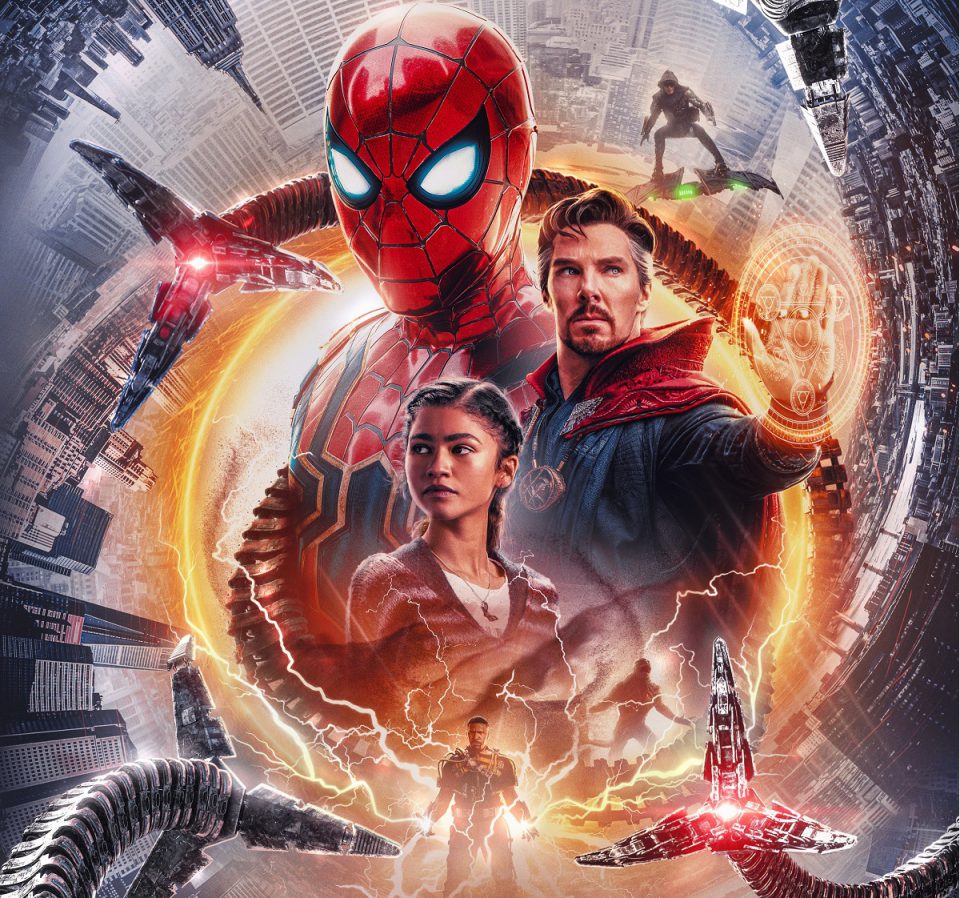 Admit it, we all thought that Avengers: Endgame was it, the penultimate movie of the MCU multiverse and the end of an era. Never again would a Marvel movie ever be able to inspire us, entertain us, and make us cry our eyes out again.

Well, Tom Holland’s third stint as your friendly neighborhood Spiderman certainly proved us wrong. Spider-Man: No Way Home pays tribute to a legacy that has been 20 years in the making while also honoring its Avengers heritage.

Here’s your spoiler alert, as this review does discuss the plot in great detail. So, for those who have still not seen the movie and are still dodging online memes and spoilers from friends, read at your own risk; you have been warned.

The movie picks up straight from when Mysterio reveals Spiderman’s true identity to the world at the shocking end of Spider-Man: Far From Home.  It’s a divided world that knows Peter Parker is the real Spiderman and either celebrates him as a hero or shuns him as a villain.

In the ensuing chaos and harassment that follows, we have a surprisingly delightful cameo from Daredevil’s Matt Murdock, who offers advice to Peter, Aunt May, and Happy amidst their legal woes, catching a hurled brick or two along the way.

The scene next shifts to typical teenage woes as Peter, his girlfriend, MJ, and his best friend, Ned, eagerly await their acceptance letters to MIT. While seemingly silly, these scenes are one of the defining aspects of director Jon Watt’s series; the characters act their age for a change!

As their college dreams come crashing down with MIT rejecting all three; Peter, in his characteristic way, is determined to find a way out. After all in his universe, the past, present, and the future rarely stay the same.

What follows is a fascinating sequence of events that involve Peter seeking assistance from fellow Avenger, Dr. Strange, who hilariously alternatives between asking Peter to call him Stephen and Sir. The solution he offers is simple; casting a spell to help the world forget who Spiderman is and get Peter and his friends into MIT.

However, things rarely go as intended in the Marvel cinematic universe, and Peter’s last-time specifications destabilize the spell, leading Dr. Strange to contain it.

As Peter is sent off by an outraged wizard to ask the Head of Admissions at MIT to reconsider their decision, the first of the old-school Spiderman villains Dr. Otto Octavious enters the scene with his titanium tentacles.

What follows next is an unexpected comedy of errors as villains from the original trilogy, and The Amazing Spider-Man series make an appearance, only to realize that they’re fighting the wrong Peter.

Amidst all the chaos and confusion, Peter is tasked with tracking and transporting them to Dr. Strange’s dungeon, where they are locked in a cage, waiting to be sent back to their universe.

As Peter rounds up Dr. Otto Octavius, Green Goblin, Sandman, Lizard, and Electro, he faces a new dilemma; can these villains be redeemed, or should they be left to die?

Inspired by Aunt May, Peter embarks on a quest to save these villains until the Goblin (William Dafoe is simply brilliant as he alternates between his two personalities!) throws a wrench in his plans by blasting everything to hell. In another heart-rending death scene, Marisa Tomei makes us cry right there in the middle of the theater, and the movies as Peter bids a tearful farewell to Aunt May (dare we hope for a return in the next movie, let’s keep our finger crossed).

Alone and feeling utterly helpless, a bewildered and heartbroken Peter escapes to down his sorrows.

However, friends never give up on each other in this Spiderman trilogy as Ned unleashes his inner sorcerer’s powers to summon the original Peter Parker a.k.a. Tobey Maguire, and the amazing Peter Parker or Andrew Garfield into their universe.

As one of the most anticipated scenes in the movie, the sheer epicness of the scene is undercut by Ned’s grandmother asking Garfield’s Spiderman to clear out the cobwebs on her roof.

What unfolds next is a surreal sight straight out of every Marvel fan’s penultimate fantasy, as the 3 Spidermen from different generations converge onscreen, invoking the original’s most iconic dialogue, ‘with great power comes great responsibility.’

With a perfect storm gathering, the trio of Peter Parkers joins hands to create a tangled web of traps to outsmart the villains and find them a way home.

As a cinematic masterpiece that combines Spiderman fandom with heartbreaking tragedy, sarcastic quips, and some good old-fashioned nostalgia; the movie packs a multiverse of emotions into a 2-hour long moving picture.

Apart from the sheer genius of bridging the entire Spiderverse together, the movie treats you to several well-choreographed action sequences and some pretty impressive swings.

Spider-Man: No Way Home offers a chance at redemption not just for its villains, but also for its heroes, as Andrew Garfield’s Spiderman breaks MJ’s fall, saving her life in the process, finally forgiving himself for failing to save Gwen.

With a 94% rating on Rotten Tomatoes, the movie seems to have broken the 3rd installment curse that has plagued the franchise for so long.

In the end, the villains may be gone, but the fabric of time is torn, and the only solution is another spell, one that will make everyone in the world forget who Peter Parker is.

As the movie closes on a lonely and friendless Peter Parker going back to the basics with a home-stitched Spiderman suit, fans are left wondering will he be alone forever? Here’s hoping for a happier ending and some equally mind-blowing thrills in the next one.

P.S. Do stay back for the end-credits scene, as you’re sure to enjoy this one!

P.P.S. Any review of Spider-Man: No Way Home would be incomplete without mentioning J.K. Simmon’s riveting performance as J. Jonah Jameson, a cantankerous reporter with a personal vendetta against Spiderman.