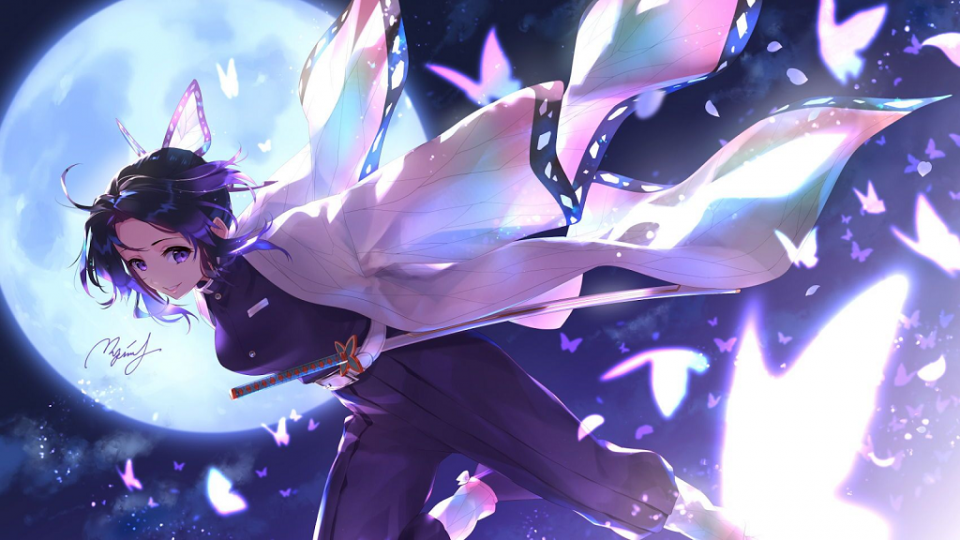 Shinobu Kocho is one of the key characters in the popular manga and anime series Demon Slayer: Kimetsu no Yaiba. Shinobu Kocho serves as the Insect Hashira of the Demon Slayer Corps. She has some famous siblings (older sister Kanae Kocho and the adoptive older sister of Kanao Tsuyuri). Unlike many demon slayers, Shinobu Kocho didn’t just want to slay all the demons she encounters and years to befriend some of them. However, her opinion was changed when the demons murdered her older sister Kanae. Unwilling to heed Kanae’s dying wish for Shinobu to leave the Demon Slayer Corps until she kills the Demon who took Kanae from her, Shinobu Kocho has been on a demon hunting mission, searching for the one who murdered her sister. However, Shinobu Kocho still forgives the demons that are willing to undergo excruciating torture engineered by Shinobu herself as restitution for their crimes (of harming humans). Let’s find out more about this fascinating character as originally published by 2MinutesRead.com.

Shinobu Kocho: Who is this Demon Slayer?

Shinobu Kocho is beautiful and petite. Her appearance makes many unassuming fools underestimate her strength. Her hair is black with highlighted purple tips which she ties back into a bun using a butterfly-shaped pin. Shinobu Kocho’s eyes are deep purple without visible pupils. She keeps an innocent look on her face almost all the time.

What kind of uniform does Shinobu Kocho wear?

Shinobu Kocho wears the standard Demon Slayer uniform that consists of a dark purple straight-lined jacket, and hakama pants tucked into butterfly patterned fabric around her lower legs that match her haori. The jacket’s colour matches the colour of her eyes.

Her signature white haori has a butterfly wing pattern that appears like butterfly wings whenever Shinobu Kocho moves (she is the Insect hashira after all). The white of the haori fades into turquoise and then pink color on her sleeves as well as the base of the dress and her legs. Her sleeves are cuffed with a black and white dotted trim which looks like an insect. She finishes up her outfit with white sandals and purple straps along with a white belt that also happens to carry her sword’s sheath.

Shinobu Kochu is generally seen with a calm and friendly demeanour. Sometimes, her friendliness can unsettle people. She often greets others by saying “woo-hoo” after suddenly showing up next to them, often startling others. However, people shouldn’t be fooled by her cute smile and playful demeanour. She is a ferocious fighter who can be quite hot headed at times. Shinobu Kocho’s smile is a way for her to pay respects to her murdered sister Kanae’s personality. Bubbly demeanour aside, Shinobu Kocho possesses a very strong sense of justice and is always ready to punish demons for bringing harm to humanity. Shinobu is very straightforward and manages to stay calm and collected in the most chaotic situations. Even when demons refuse to become friends with her, she still retains a smile on her face while she punishes them for their bad deeds, appearing somewhat sadistic in the process.

What are the abilities and powers of Shinobu Kocho?

As the Demon Slayer Corps’ Hashira, Shinobu Kochoa is an incredibly powerful and skilled swordswoman. While she lacks any superhuman ability and the sheer physical strength to chop the head of a demon like most other Demon Slayers, she manages to be as dangerous and deadly in battle as all the other Demon Slayers. Because she is an Insect Hashira, she has an insect based combat style.

What kind of sword does Shinobu Kocho use?

Shinobu’s katana is one of the Nichirin Swords. It has a thin black blade that only has normal width at the tip and base of the blade. The sword also has some Kanji engraving which reads “EVIL DEMONS”. The sword is also coated in poison, so even a small wound inflicted by it can lead to eventual death. The sword of Shinobu Kocho also has a butterfly-shaped tsuba with an orange outline around the silver filling. There are also some small flower patterns on it. The sword also consists of an orange tsuka pommel wrapped in green samegawa.

“It may be that I’m constantly angry. My beloved older sister was slaughtered by a demon. I see the mournful tears of others who’ve lost their loved ones in the same way. I hear their loud cries of despair and each time I do the anguish inside me grows larger. In the innermost depths of my soul there’s a hatred that I can’t fight. I’m sure the other Hashira feel something similar. But now with their own eyes they’ve seen a demon who has never devoured a human, they can’t deny her existence. [..] My sister was a kind-hearted person like you. She had sympathy for demons, even when she was on the brink of death that didn’t change. I couldn’t bring myself to feel that way. To do so for something that’s killed us? I’ve never heard of such nonsense. But if that was how my sister truly felt, then I must carry it on. If there is a way to not kill these pitiful demons I have to keep trying to find it while keeping the smile my sister said she loved.”

“Just because you haven’t been beheaded don’t think that you’re safe from harm. There are those like me who use poison with their swordsmanship. Demon Slayer Corps Insect Hashira Shinobu Kocho. I may be the only one among the Hashira who is unable to decapitate demons but creating a poison that’s lethal to them: that’s quite impressive don’t you think? Oh! Pardon me I guess you can’t hear me if you’re dead. Silly me!”

-Shinobu Kocho speaking to a demon she slew.

What Are Joe Biden’s Plans for Afghanistan? Is the Us Troop Withdrawal Going to Get Completed by the May of This Year? Read to Know All About Joe Biden’s Fresh Policy for the Afghanistan.