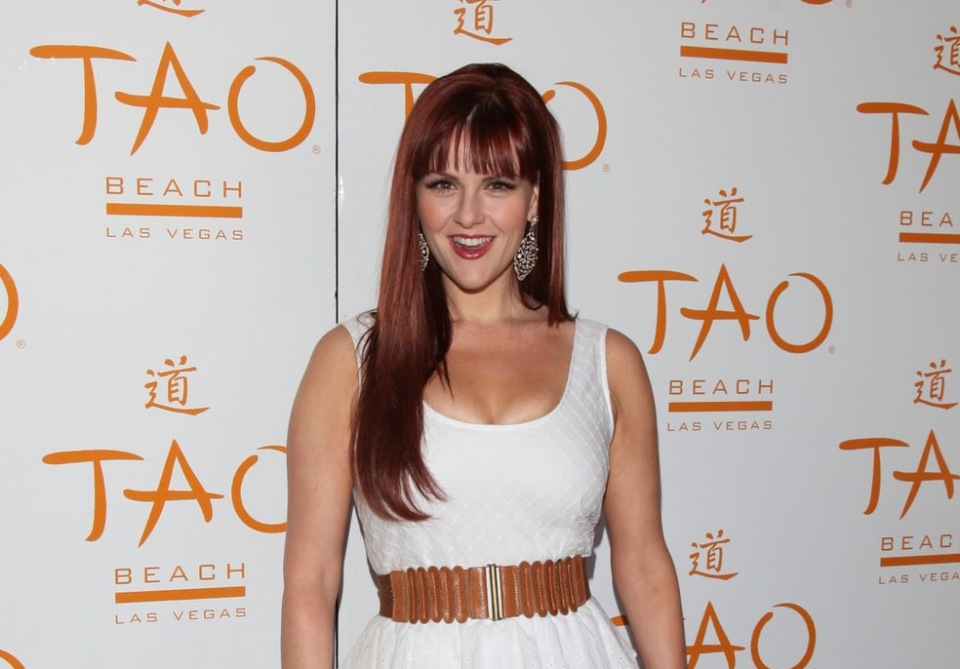 Sara Rue is an American actress who is one of the most successful TV actresses, playing several recurring roles over the years.  She started her career as a child actress, appearing in films and television series such as ‘Rocket Gibraltar’ and ‘Grand.’ She has played important roles in films, such as ‘For Christ’s Sake,’ ‘Gypsy 83,’ and ‘Miss Dial.’

She has played Claudia ‘Claude’ Casey in ‘ABC’ network’s sitcom ‘Less Than Perfect.’ She is also best known for the roles she played as Carmen Ferrara on the comedy-drama Popular. Rue has also appeared in stage plays, such as ‘The Water Children’ and Gregg Henry’s musical ‘Little Egypt.’ In 2009, she became the celebrity spokeswoman for the popular nutrition company ‘Jenny Craig.’ In 2011, Rue hosted the reality competition television series ‘Shedding for the Wedding.’ In the same year, she also appeared as a guest judge in the popular reality TV series ‘RuPaul’s Drag Race.’

Sara Rue came into this world as Sara Forbes Schlackman on January 26, 1979. She was born in New York City, New York, USA, to Joan and Marc Schlackman. Her parents were active in Broadway, as her mother is a former actress and musician, while her father worked as a stage manager.

She made her acting debut at the age of nine, playing Jessica Hanson in the 1988 drama film ‘Rocket Gibraltar.’ In the film, she appeared alongside actors like Kevin Spacey. The following year, she landed one of the main roles in ‘NBC’ network’s sitcom ‘Grand.’ She appeared in 26 episodes of ‘Grand’ where she played Edda Pasetti.

At the age of 13, she played Megan Scanlan in the 1992 comedy film ‘Passed Away.’ In the same year, she also appeared in one of the episodes of American television sitcom ‘Roseanne.’ In 1993, she landed her first recurring role as Monica in a TV series titled ‘Phenom.’

You May Like: Sara Rue: Why Did The Big Bang Theory Actress Leave the Show?

With over 60 credits on her IMDb page, Sara is quite a seasoned actress

Sara Rue returned to films in 1998, when she was cast to play minor roles in a couple of films, including ‘Can’t Hardly Wait’ and ‘Nowhere to Go.’ The following year, she played Violet in the romantic drama film ‘A Slipping-Down Life’ and then played Debbie in ‘A Map of the World,’ which was adapted from a novel of the same name.

In 2001, she played the lead role of Gypsy Vale in the Todd Stephens-directed drama film ‘Gypsy 83.’ In the same year, she also appeared in the romantic period war drama film ‘Pearl Harbor’ where she played Nurse Martha.

She received her breakthrough role in 2002, when she was cast to play Claudia ‘Claude’ Casey in the popular American sitcom ‘Less Than Perfect.’ She played the role from 2002 to 2006, appearing in 81 episodes. In 2003, she played Gabby Castellani in the Douglas Barr-directed television film ‘This Time Around’ which was aired on ‘ABC Family Channel.’

Rue played the title role in a short film titled ‘Barbara Jean’ in 2005. The following year, she appeared in a couple of films, including ‘Danny Roane: First Time Director’ and ‘Idiocracy.’ In 2006, she also appeared in a television film titled ‘Play Nice.’ From 2006 to 2009, she made guest appearances in popular TV series such as ‘Two and a Half Men,’ ‘The Big Bang Theory,’ and ‘Leverage.’

From 2009 to 2010, she played Penny Higgins in the fantasy comedy-drama television series ‘Eastwick.’ The series was based on John Updike’s novel ‘The Witches of Eastwick.’

In 2010, she landed the lead role of Candy in the Jackson Douglas-directed comedy film ‘For Christ’s Sake.’ In the same year, she also played Shira Cole in one of the episodes of the famous medical drama television series ‘Private Practice.’

From 2010 to 2013, Rue played Brenda in the popular sitcom ‘Rules of Engagement.’ She hosted the reality television series ‘Shedding for the Wedding’ in 2011. In the same year, she was also seen in a television movie titled ‘My Future Boyfriend.’ From 2012 to 2013, she played Kim Sallinger in ‘ABC’ network’s sitcom ‘Malibu Country.’ In 2013, she played an important role in a romantic comedy film titled ‘Miss Dial.’

From 2016 to 2017, she played Karen Delfs in seven episodes of the popular crime procedural comedy-drama series ‘Bones.’ From 2017 to 2018, she played Nancy Granville in ‘ABC’ network’s sitcom ‘American Housewife.’ In 2018, she also played Olivia Caliban in seven episodes of black comedy-drama web television series ‘A Series of Unfortunate Events.’

Apart from playing important roles in films and TV series, Sara Rue has also played prominent roles in stage plays, such as ‘The Water Children’ and ‘Little Egypt.’ She has also appeared in many popular TV talk shows, including ‘Ellen: The Ellen DeGeneres Show,’ ‘Entertainment Tonight,’ ‘The Late Late Show with Craig Ferguson,’ ‘Good Morning America,’ and ‘Jimmy Kimmel Live!’

Sara Rue once tied the knot with British film director, writer, and producer Mischa Livingstone in 2001. The couple got divorced in 2007.

After her divorce from Mischa Livingstone, she started dating a teacher named Kevin Price. After dating Price for four years, Rue got married to him on May 21, 2011. On February 9, 2013, Rue and Price were blessed with a daughter named Talulah Rue Price. In October 2016, the couple adopted a girl child whom they named Adelaide Rue Price.

How did Sara Rue lose weight?

The Sara Rue weight loss journey began long before she was widely known for losing 50 pounds (roughly 22.7 kilograms) on the Jenny Craig diet. However, once she signed up to be a spokesperson for Jenny Craig, she was able to once and for all win the battle against excess weight.

The Jenny Craig diet prides itself on using science to help its users finally lose those extra kilograms. It provides a personalized menu with healthy meals as well as step-by-step coaching for subscribers. Using this diet, Rue had only aimed to lose 30 pounds, but by the end, she had surpassed her initial goal with an extra 20 pounds. Other than using the diet, the star also said that she incorporated exercise into her life. Sara would do cardio five to six days a week by running on the treadmill for 45 to 60 minutes. As the weight on the scale kept going down, the star realized that she could run outdoors for two and a half hours straight! Sara Rue is a classic example of a big boned actress who has really got a handle on her weight loss.

Sara Rue is an American entertainer. She is referred to for her exhibitions as Carmen Ferrara on Popular, and as Claude Casey on Less than Perfect. In 2011, she facilitated The CW reality arrangement Shedding for the Wedding. She had a repetitive function in the parody Rules of Engagement, in which she played Brenda, the softball partner and old buddy of Jeff Bingham. She likewise had a standard function as Kim on the fleeting ABC sitcom Malibu Country, and showed up in the primary cast of the TV Land parody arrangement Impastor. She is additionally referred to for her function as Olivia Caliban in the second period of A Series of Unfortunate Events.

Sara Rue was conceived Sara Schlackman in New York City, the girl of Joan Schlackman (née Rue), a city representative and previous entertainer, and Marc Schlackman, a phase manager. The senior of two girls, she was brought up in New York, where her folks were dynamic in Broadway theater. She is Jewish.

Mourn started her acting profession at nine years old, showing up in the 1988 film Rocket Gibraltar as Kevin Spacey’s little girl. Lament played an exceptionally youthful Roseanne in the primary gathering of Roseanne and Dan at a party on the TV show Roseanne.

She featured in the parody Grand, before proceeding to take a shot at Phenom; Minor Adjustments; Zoe, Duncan, Jack and Jane; ER; The Division and Popular. From 2002 to 2006, she featured in the principle part of Claude Casey on the ABC sitcom Less than Perfect. She has showed up in a few movies: A Map of the World, Can’t Hardly Wait, A Slipping Down Life, Idiocracy, Gypsy 83 and had a little part as a sitter in Gore Verbinski’s variation of The Ring. She dazzled chief Michael Bay so much that a job was composed into the film Pearl Harbor for her.

Lament showed up uncredited in the 2006 Mike Judge film Idiocracy, in the part of the Attorney General. In 2006, Rue featured in the stage melodic Little Egypt with French Stewart, Jenny O’Hara and Gregg Henry at the Matrix Theater in Los Angeles. She visitor featured in Two and a Half Men as Berta’s pregnant most youthful girl. She had a stretch on the CBS sitcom The Big Bang Theory, playing Leonard Hofstadter’s doctor sweetheart Dr Stephanie Barnett for three scenes. Her first appearance on the show happened on November 17, 2008. In 2009, Rue showed up in the films Man Maid and For Christ’s Sake. She featured on the fleeting 2009 arrangement Eastwick, in light of the novel and film The Witches of Eastwick.

In October 2010, Rue joined the cast of Rules of Engagement in a repetitive part as Brenda, Jeff and Audrey’s surrogate.

It was reported in December, 2011 that Rue would compose and featuring in another show on The CW called Poseurs, about a young lady named Lucy whose life is overturned when her life partner moves out and her straight from-recovery university closest companion, Alexandra, moves in. The two companions act like a lesbian couple and really get hitched so as to remain in the decent high rise that just permits wedded couples.

In 2017, Rue was projected in the common part of Olivia Caliban on the second period of the Netflix parody dramatization arrangement A Series of Unfortunate Events.

Mourn wedded producer Mischa Livingstone in 2001, and they separated in 2007. Rue wedded instructor Kevin Price on May 21, 2011, in a customary Jewish wedding. She brought forth their first youngster, a girl in February 2013. She and Price received a second little girl in November 2016.

No place to Go a.k.a. Quiet Hearts (USA: TV title)

A Map of the World Debbie

2009 Not Since You Sarah ‘Doogs’ Doogins

Cheerfully Ever After: Fairy Tales for Every Child Younger Sister (voice) Episode: “The Golden Goose”

1999 Zoe, Duncan, Jack and Jane Breeny Kennedy Episodes: “All that You Wanted to Know About Zoe”, “To Jack, from Zoe”, and “Compassion toward Jack”

2002–03 The Division Amanda McCafferty Episodes: “Find the stowaway”, “Recognition”, and “Demonstrations of Betrayal”

2006–07 Two and a Half Men Naomi Episodes: “Rehashed Blows to His Unformed Head” and “Maiming Sheep in Montana”

Bad dream toward the End of the Hall Courtney Television film

2010 Private Practice Shira Cole Episode: “Until the end of time”

2011 Shedding for the Wedding Herself – Host Regular (5 scenes)