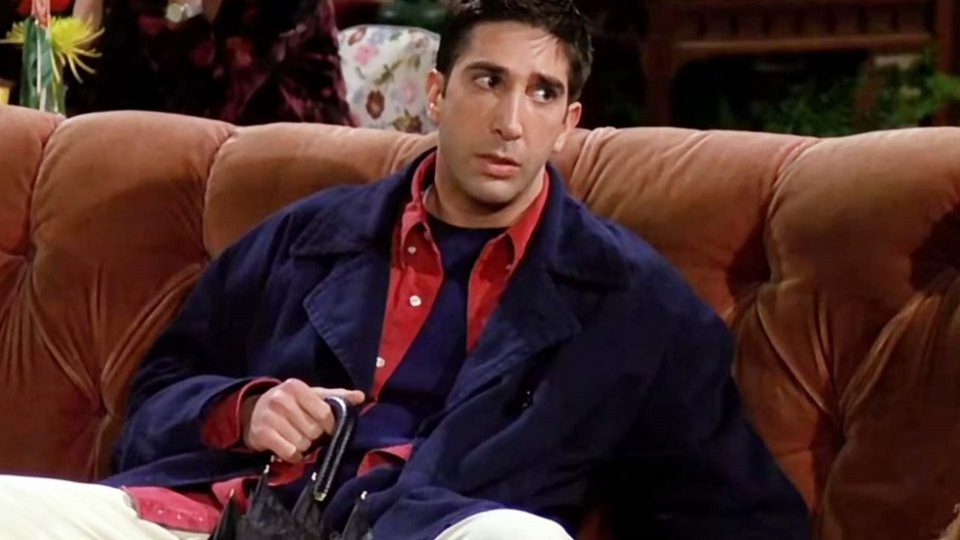 One of the strangest things about Ross Geller from FRIENDS was not his obvious jealousy, or the fact that he always had to be right about everything (remember when Phoebe blew his mind with the Atom), or the fact that he plainly tried to hide his divorces. To me, one of the weirdest Ross Geller moments was seeing his younger sister Monica struggle throughout her life – even becoming a control freak with OCD and yet, Geller never really stands up for her like a big brother. This got me thinking about how sitcoms in the 90s painted their characters in dark, twisted ways, with subtle tones of serious issues, all wrapped up in a non-PC cover. Do you think these acts below are defendable?

Ross was dismissive of Rachel’s career.

He made Rachel wait for him at the museum bored out of her mind ON THEIR SECOND DATE and then proceeded to threw a hissy fit about their anniversary dinner, didn’t listen to her, and then acted hurt when she tried to get him to understand that her job was as important to her as his was for him.

The hypocrisy of it all, the fact that they even broke up/went on a break was because he thought that his work was so important while Rachel’s is just inconvenient.

Ross tried to kiss his cousin.

Geller somehow convinced himself that his cousin wanted to have sex with him, so he tried to kiss her. Some would say this is literally sexually harassing his own first cousin. Although many marriages where caste and inbreeding abide by these stringent rules (royal families in particular), did the writers really have to do this?

Ross dumped Bonnie after she shaved her hair off.

Speaking of the writers, clearly this was before everything turned PC and body positivity was out of the question when Ross dumped Bonnie for shaving her head

It was just an incredibly vain and very underrated example of him being the worst.

Ross lied to Rachel about getting their marriage annulled.

Another absolute worst thing Ross ever did was lie to Rachel about having their marriage annulled. He completely ignored Rachel’s feelings on the matter and deceived her just because he didn’t want to have three failed marriages. It was just some nasty kind of power play so he’d have something to hold over Rachel yet in total silence. Defendable? Let us know!

Ross didn’t tell her about Rachel’s pregnancy, he classically acts like a slimeball and hides things until Rachel’s dad comes knocking and only then does Ross try to explain why he wasn’t marrying Rachel in front of her dad (with Mona right there!)

Talk about a man on the fence when Ross gave her a key to his apartment then changed the locks, bailed on dates and finally moved Rachel into his apartment without telling her – all on Valentine’s Day.

Ross conveniently kept the tape, you know the one where he filmed himself and Rachel having sex.

The fact that Ross Geller accidentally taped himself and Rachel having sex was a comical hit in the writer’s room and in the audience! The story was brilliant with the joke being that Joey taught Rachel “the fake sex story” – and the emotional thing to tie it together was the pregnancy and the maturity that came afterwards from these two characters! But if you think about it, Ross only admitted to having it so he could win the argument on who’d initiated sex.

Speaking of the writing style of sitcoms in the 90s, clearly, this was before everything turned PC and pedophilia could be tastefully written into a script? Dating his teenage student really creepy but accompanied her on her spring break holiday just so he could keep an eye on her – sounds super creepy and insane.

After making a big deal about how they weren’t ready to take a trip together, Geller was the one complaining that she was the one making it too serious – were the water balloons justified? I think so!

It’s hard to pinpoint just ONE problematic Ross moment, but one of the worst, most non PC writing was showing that a man can be sensitive, then reverse that by firing them!

Ross Geller gives Sandy the Nanny a hard time just because he’s a man working in a job traditionally associated with women. Never mind the fact that he’s shown to be wonderful with Emma, and only Ross had an apparent problem with him, but to make things even worse, he even implies that Sandy couldn’t possibly be straight, and that he’s “at least bi”.

Despite opening up about how Ross’s dad bullied a young Ross for liking something lame like rocks and dinosaurs which made Ross toughen up, Sandy gets let go for the silliest reason!

Ross didn’t want Ben to play with a doll.

Another thing that points to his fragile masculinity was Ross being so intense that he spent an entire day with his son trying to take Ben’s Barbie doll away from him. Also, these things just wouldn’t air today! Maybe a one liner about the “weirdness” of it all, not a full on episode!

Ross assumed that Rachel being naked in her apartment was an invitation for him to have sex with her.

If you see your ex naked at home and think that meant that she/he was asking for sex, then that’s just really weird.

Ross refused to take the blame for his own actions.

Even after everything Monica went through and empathising with his baby sister, Ross was never truly a big brother to her because he never admitted to  smoking weed, melting his father’s records and instead blamed both on Chandler, flatly refusing to own up to it and then trying to deflect blame onto Monica – just a tragic thing to do to a sibling.

Ross wouldn’t give Joey his money back.

We get that true besties wouldn’t really steal money or even ask for some loans to be paid back if they knew their friend was in financial trouble so when Ross REFUSED to give Joey his money back because he won it “fair and square” at Chandler’s made-up game designed to help Joey out financially, showed how selfish Ross could be. Geller knew his friend was struggling financially and decided he didn’t care enough to help.

Ross slept with someone else.

Sleeping with someone else when they clearly weren’t on a break was a sly move – especially if you’re heart broken! If you watch that episode, Rachel says “maybe” they should take a break from “us” and Ross just storms out without saying a word.

First of all, Rachel didn’t declare they were on a break, she clearly opened the door to a much bigger conversation and what does the heartbroken man do? Get angry and cheat on Rachel, plain and simple. Even if it was just an incident of immaturity, the fact that he wasn’t planning on telling her was even worse! No relationship works without honesty because honest people are slightly easier to forgive.

Ross just had to be right about everything.

When Geller got angry about Phoebe thinking her cat was her grandmother, this character basically valued his rational scientific identity more than his desire to make a friend feel comforted! Ross always just has to be right about everything! Not to mention the whole Unagi thing where he just HAD to prove Rachel and Phoebe wrong about being taught self-defence and ended up attacking two women on the street – just to be right? Do you think a man will be allowed to jump/attack women in sitcoms these days?

Ross mocked Chandler for kissing a guy, not to mention the homophobia he directed at Carol and Susan and his fear that Emily was going to become a lesbian if she hung out with his ex-wife and her new wife was just bizarre. That’s not how sexuality works.

What Helps To Fight Insomnia and Improve Sleep?