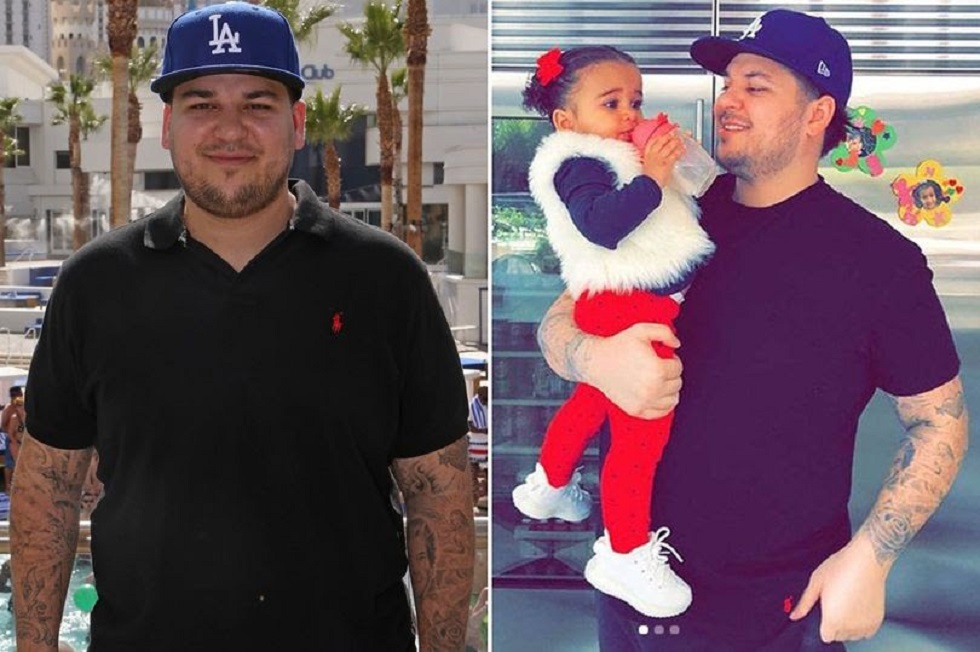 In 2007, Keeping Up with the Kardashians premiered and the only Kardashian brother was an intricate part of the reality TV show. But within 10 years, Rob Kardashian would be trapped in his own body according to Khloe Kardashian who spoke about her own weight loss, and her brother’s struggle with the scale. This was on her reality TV show: Revenge Body.

Rob has fallen into a deep dark depression, which caused him to gain a great deal of weight in a short time. At one point, he weighed over  250 pounds! Between his debut on Keeping Up with the Kardashians and his weight loss, he was getting engaged to Blac Chyna in 2016 and the pair even had a short-lived reality series, Rob & Chyna together.

But after their relationship crumbled, Kardashian retreated from the spotlight. Was it because of his weight gain? The reality star has been in hiding for months after the drama that unfolded last year with his ex and mother of Dream, Blac Chyna, 29, on social media and beyond but it looks like things are better for him now.

According to Radar magazine, a source claimed: Rob’s self-esteem has dipped so low he refuses to leave his home and has admitted he’d “rather die than be seen”.  Until 2019, he hadn’t been seen in over 900 days – only finally recently reappearing in public to celebrate his model sister Kendall Jenner‘s 24th birthday on October 31, 2019.

But after years of struggling, insiders say Rob is finally coming to terms with the fact transforming his life won’t happen overnight — or easily. And, it is great to see him getting back in shape and trying to be healthy

Why Should Rob Kardashian Lose Weight?

Health Issues and Even Death

First and foremost, Rob Kardashian revealed on an episode of the hit reality tv show that at his heaviest, he weighed just over 300 pounds. This is detrimental to anybody’s mental and physical health. According to one source, he was hospitalized after being diagnosed with diabetes and other health issues. Dr. Stuart Fischer, a New York City internist, explained that Rob was at risk for kidney dialysis, heart attack and stroke.

Not only was Rob Kardashian brave enough to open about his exact weight of 300 pounds, he also spoke about being in touch with reality. The reality is that Rob Kardashian is very uncomfortable about his weight, especially in the public eye.

He has revealed why he stopped filming Keeping Up With the Kardashians. “I just wasn’t down to have photographers follow me, so I made sure I was away from all of that,” he said. “I’m very good at disappearing.”

In August 2016, Rob opened up about missing Kim’s lavish 2014 Italian wedding to Kanye West because of his insecurities. “I was doing my suit fittings in Paris right before the wedding and I just wasn’t comfortable,” he told People. “I’m 6’1″ and at my most I probably weighed 300 lbs.”

Moreover, his family can see it too, as seen when Khloe brought up her brother on her show: Revenge Body With Khloe Kardashian, while comforting a woman named Allison. “I know how you feel,” Khloe said. “You feel trapped in your own body, and I feel that way for my brother, who has gained a lot of weight. It’s debilitating.”

The reality star who has struggled with his weight, who used to binge eat, and suffered from extreme body confidence issues is about to make a change.  According to People, Rob Kardashain is contemplating taking drastic measures. He has decided to join a weight loss camp in order to get healthier for his three-year-old daughter Dream.

Rob Kardashian and Blac Chyna welcomed baby Dream into the world and was hit in the face by reality when he was diagnosed with type 2 diabetes in December 2015. The depression affected him so much that he refused to be filmed on Keeping Up With The Kardashians in 2016 due to the way he felt about his own body. So it’s only fitting that the reality star doesn’t want his daughter to grow up watching him struggle. Other celebrities such as Adele have also drawn inspiration towards weight loss because of their children.

An inside source has just revealed that Rob is willing to do anything he can to be around to watch Dream grow up. “He thinks a live-in fitness and health program might be the best option for him” the source revealed. “If he starts losing more weight by exercising and changing his diet during a camp, he believes he will be able to stick with it at home as well.”

“Everyone else in the family is working out and thinking about what they eat. He wants this year to be the year when he takes care of himself. He wants to be healthier for Dream.”

The following are some tips about Rob Kardashian’s weight loss.  These tips were delivered by sources close to the reality star:

“He is very focused on making changes and sticking with it. He has cut down fast food and has completely changed his diet,”, a source has revealed. This step alone is really very beneficial for weight loss.

Rob Kardashian has grown tired of obesity and is inspired to be the healthiest father possible for his daughter Dream. Although exercise and a healthy diet are significant methods when it comes to losing weight, zero alcohol consumption is also key. So there you go, Rob’s secret weapon has been eliminating alcohol from his diet completely.According to Hollywood Life, a source close to the Kardashian has revealed that Rob has completely quit drinking alcohol and is drinking a ton of water right now.  After eating a lot healthier, a source claimed that he knows getting rid of the drinking was a very big, important step both mentally and physically. That’s really how he’s going to lose a lot of weight.

In June 2019, Rob Kardashian announced that he was hitting the gym and determined to shed the weight. Later in October 2019, fans caught a glimpse of him in Kim’s Instagram stories. Holding his child, the star looked noticeably thinner. Also, according to TMZ he has lost around 20 pounds so far! In addition to his new diet, Kris Jenner’s son has also been working out regularly with a trainer and playing basketball with friends.

At this time, we are all anticipating Rob Kardashain’s successful transformation as he undergoes a weight loss program.