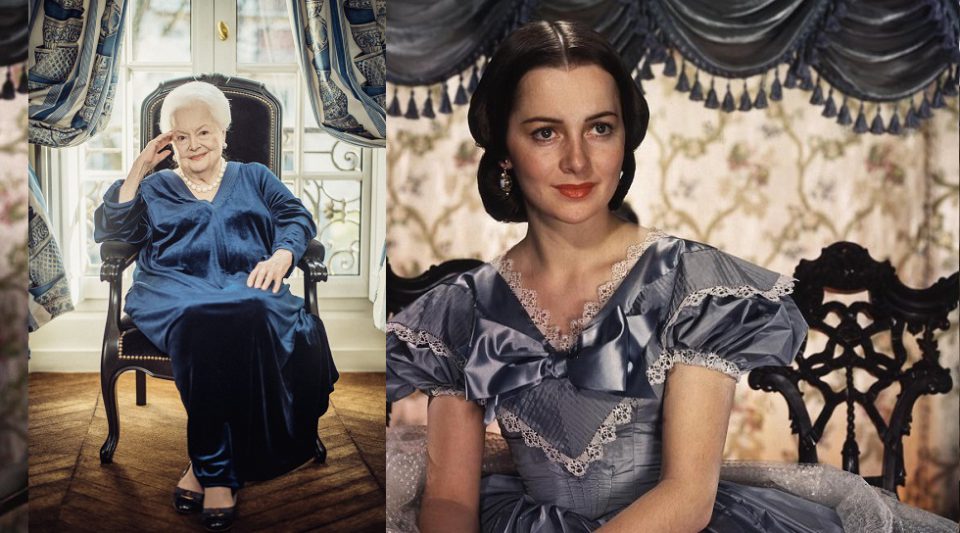 The British-American actress Dame Olivia Mary de Havilland DBE, died in Paris, Goldberg on July 26th,2020. The reports say Olivia died of natural causes. This legendary actress was the oldest living performer to have won an Oscar. Olivia De Havilland, The Golden Age of Hollywood, was a 5 times Oscar nominee. She won an Oscar for the best supporting role for the movie, Gone with the Wind (1939). She also won Oscars for the Best Actress category for To Each His Own and The Heiress.

Her career in Hollywood spanned over 50 years with features in 49 movies.

She was born on July 1, 1916, in Tokyo, Japan to Walter, a British Lawyer and Actress Lilian. As a child, Olivia was a keen learner of performing arts such as Ballet Dancing, Drama and Music. She loved reading, writing poetry, and drawing. She also represented her school in a county spelling bee, where she secured the second position. Along with being excellent at her academics, she was also good at Oratory and Field Hockey.

As a teenager, Olivia De Havilland made her debut in the amateur theatre with her first play, Alice in wonderland. After high school, Havilland was offered a scholarship to pursue her career as a teacher. At the age of 18, she signed a five-year contract with Warner Bros. and started her career at Hollywood.

De Havilland made her Hollywood debut with Reinhardt’s-A Midsummer Night’s Dream in 1934. Film director, William Dieterle helped Olivia brush up her acting skills and was extremely impressed by Olivia’s willingness to learn. After doing sweet and charming roles for movies like The Irish In Us and Alibi Like, Reinhardt’s cast her for action drama movies like American Great Depression and Captain Blood in 1935. The popular success of the film and her on-screen chemistry with Errol Flynn Gave her a lot of new opportunities in the industry.

Olivia De Havilland also appeared in Anthony Adverse, a film which earned six Academy Award nominations which gave her good exposure. In the same year, Olivia’s action-packed film, The Charge of the Light Brigade was a box office hit. In 1936, Olivia De Havilland renegotiated her contract with Warner Bros and turned it into a seven-year contract for which she was paid $500 weekly.

In 1938, Olivia De Havilland gained immense stardom after her movie The Adventures of Robin Hood which was also nominated later for Academy Awards. This is also one of the most popular adventure movies of the Classic Hollywood Era. After gaining more popularity, Olivia did more routine roles in romantic comedy movies like Four’s A Crowd and Hard To Get. Many of her movies are considered to be the top movies of the Golden Hollywood Era and produced many box office hits.

In 1938, she was cast for the movie, Gone With The Wind which later gave her an Oscar. In the year 1940, Olivia rejected to work with a lot of movies. In 1941, after her appendicitis surgery, De Havilland appeared in some more romantic movies till 1944. One of her personal favourite roles was in the film Princess O’Rourke in the year 1943.

In 1943, a grievance took place between Olivia De Havilland and Warner Bros on terms of her rejecting roles which was against their contract. Risking her career, De Havilland filed a lawsuit against the Warner Bros. An year later the case was released in her favour.

During the war years, she also expressed patriotism and contributed.

Later in 1945, Olivia De Havilland signed a contract with Paramount Pictures. She signed for different roles such as My Life In Art, The Dark Mirror etc. De Havilland was also highly appreciated for her role portraying mental illness in the movie The Snake Pit. She also lost a considerable amount of weight for the same and took the help of psychiatrists to understand real-life situations and portray her role better on-screen. She also won an Academy Award for this movie.

She won her second Oscar, and many other awards such as the New York Film Critics Award for The Heiress in 1949, for the roles of Catherine.

In 1950, De Havilland played the role of Juliet on stage, which she was longing to do.

In 1955- 56, Olivia De Havilland gave two unsuccessful films that didn’t perform well at the box office which includes, The Ambassador’s Daughter and the Spanish film, That Lady.

After a few more successful movies and plays, Olivia De Havilland published her own book, Every Frenchman Has One, which talks about her journey of learning and understanding the French culture.

Some of her last films were in 1964, Hush Hush…Sweet Charlotte and The Fifth Musketeer in 1979. In the later years, as finding roles became slightly difficult for Olivia, she was seen in Television Dramas.

Some of her best-known television dramas include The Royal Romance of Charles and Diana, Anastasia: The Mystery Of Anna, which also gave her the Golden Globe Award for the Best Supporting Actress.

At the age of 92, Olivia De Havilland received many awards such as the National Medal of Arts. She was appointed the Dame Commander of the order of the British empire in the 2017 birthday honours by Queen Elizabeth II for her 101st birthday.

De Havilland was an actress known for her honesty, integrity and good manners.

Reportedly, she had a difficult relationship from childhood with her younger sister, Fontaine, who is also a renowned actress in Hollywood. It was triggered by them both being nominated for Best Actress in 1942, with Fontaine winning. The relationship with her sister was always a constant source of gossip in the industry.

De Havilland started dating Marcus Goodrich, a navy veteran in 1946 and later got married to him that year.

On September 27th, 1949 Olivia gave birth to her first child Benjamin. She took time off films to give the required attention to her child.

In 1952, De Havilland filed a divorce against Marcus Goodrich, who was 18 years elder to her, due to his poor temperament issues.

In 1953, Olivia met Pierre Galante, the executive editor for the French journal- Paris Match and got married to him in 1955.

The couple divorced in 1962 but continued to live in the same house for another six years to raise their daughter together. Reports say that Olivia was also there with Galante until his final rites.

Business Growth – Which Software to Choose?