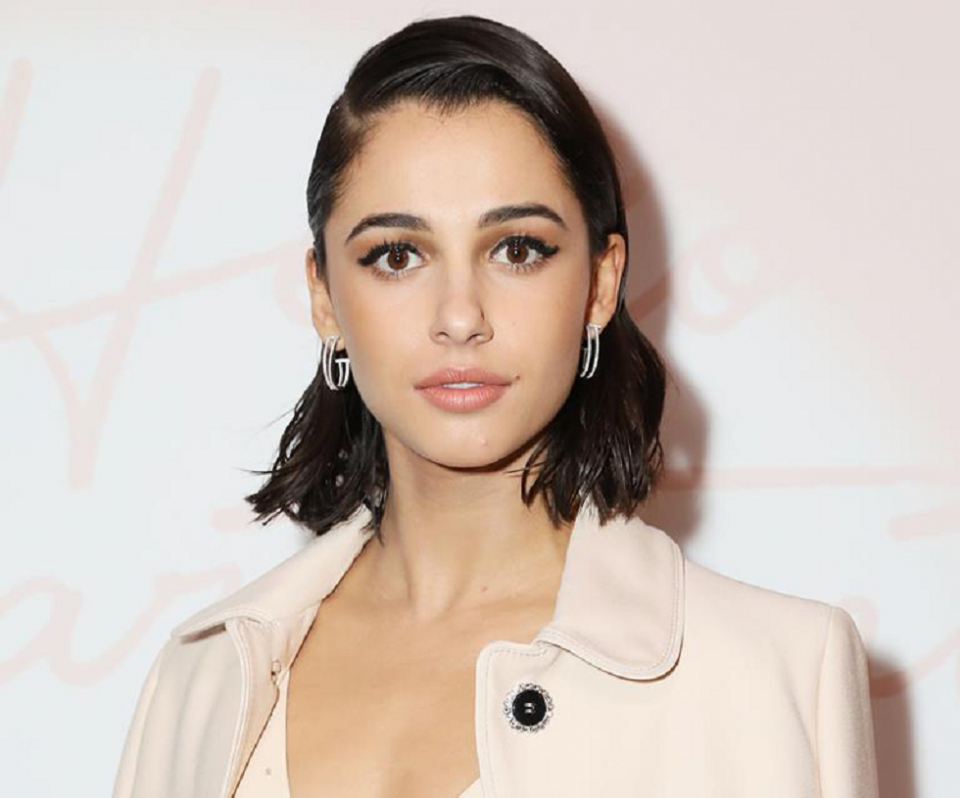 Naomi Scott is an English actress and singer. The London-born actress has the whole blockbuster thing nailed- working in the Power Rangers movie, her turn as Princess Jasmine in Guy Ritchie’s live action remake of Aladdin and the re-booted Charlie’s Angels! But do we know details about her personal life? Did you know that she had a successful career in music? Here are 20 facts about Naomi Scott that are interesting!

1. Her middle name is Grace:

Naomi was born in Hounslow, London. She is of English and Indian descent.

At eight years of age, Naomi and her family shifted to Woodford in Redbridge, North East London where both her parents were pastors at the Bridge Church.

Here she grew up listening to gospel and R&B music particularly favouring singers like Kim Burrell, Mary Mary and Kirk Franklin, and singing in church.

4. Her mother, Usha Joshi, is of Indian descent from Uganda:

Usha Scott (her mother), is an Uganda-born Indian who emigrated to England at a young age. As her mother is from Gujrat in India, Noami Scott is proud of her heritage and has shown off her Indian roots several times on Instagram.

Naomi grew up in Britain and has an older brother named Joshua who is obsessed with Will Smith.

6. Naomi Scott’s parents are pastors at the Bridge Church, in Redbridge:

Naomi Scott’s parents share a career—preaching at the Bridge Church, Woodford in Redbridge, United Kingdom. Bridge Church’s website describes it as “a community of ordinary people who have found peace, joy and purpose in an extraordinary God.”

The British actress talked about being a pastor’s kid in her 2019 interview with W magazine. She described her parents not being strict as the stereotypical pastors, and Scott said her parents allowed her to discover her faith on her own. “Yes, I have a belief system, but I don’t know everything, and we’re all just as messed up as each other,”

7. Scott is involved in missionary and outreach work:

The Charlie’s Angel actress is a Christian and believes in doing charity work. Scott is a UK ambassador to the Christian charity organisation Compassion International, sponsoring children and families living in poverty.

Naomi was seen traveling to Kigali, Rwanda to work with the charity. With Compassion UK, she helps the organization and the local churches it partners with to sponsor children and families around the world that live in extreme poverty, and works to sponsor education, medical needs, and financial assistance.

In a 2017 interview with The New Potato, the Christian actress spoke about her and her husband’s work with Compassion UK, saying:

“It is about empowering kids to make a difference in their families and for them to become equipped to change their situations–as opposed to just giving them something that they don’t know what to do with. They are teaching them how to use those tools. We sponsor some kids and they do other projects that were closely involved with.”

She’s been married to former England footballer Jordan Spence, who now plays for Ipswich Town, since June 2014. Before saying their I dos, they dated for four years.

Spence has accompanied her to several Aladdin premieres.  The couple also makes regular, impossibly photogenic appearances on one another’s Instagram accounts, but as players in the very tricky game of social media PDA, they manage to successfully land in the ‘actually pretty sweet’ camp, rather than the ‘weird couple’ camp.

The multi-talented couple are behind the music video for Nick Brewer’s single, “Forget You”.

Naomi Scott has had a lot on her hands- with her breakout role as Princess Jasmine in Disney’s Aladdin remake; her first Vogue cover for the magazine’s April issue; and, for a spectacular finish to the year, her career-making turn in Elizabeth Banks’s Charlie’s Angels.

On a rainy morning in London’s Soho Hotel, however, it’s her first turn behind the camera that’s the subject of the 26-year-old’s boundless enthusiasm: a music video for “Forget You” by musician Nick Brewer, which she co-directed with Jordan Spence (her hubby).

“Our motto is just to say, ‘I don’t know!’ when we’re lost,” upon being asked how she managed being in the director’s chair for the first time. “Imagine going in to pitch a film and saying that… We’ve never pretended that we’re experts at this. I ask a lot of questions.”

But the 11-minute video they produced together is in no way a work of amateurs – in spite of the fact that it was made entirely with friends and “people we’ve been in love with for ages”, according to 29-year-old Spence. Friends? Yes, the couple are not only friends with Musician Nick Brewer who they have known the couple for years, but Naomi’s stylist (more on him below too) Zadrian Smith acted as fashion director for music video – weaving in plenty of nods to art history thanks to a background in 16th-century Renaissance painting.

“We’re constantly bouncing ideas off of each other: for scripts, for visuals, for music…” the British actress said of their power couple dynamic. “Collaborating with each other like this is just part of our everyday life.” Spence helped her finish by saying: “Plus, for us, this sort of creative work really is personal – and that’s what’s ultimately so great.”

Like any proper millennial, Naomi is a proper multi-hyphenate: she’s as talented a musician as she is an actress. She began singing in the Youth Band at the Bridge Church in Woodford, where her parents Usha and Christopher are pastors, and has released two EPs on her own label: Invisible Division in 2014 and Promises in 2016.

The now famous actress first played piano and started writing her own songs when she was just 15.

“I grew up singing in church actually. That’s kind of where I just the usual, I grew up on gospel music. I was singing from a young age.” she said in an interview with Huffington Post back in March 2017. “I remember that I chose ‘Don’t Speak’ by No Doubt so that was my first kind of performance. I think from there, I felt like it was something I actually really enjoyed and wanted to do.”

Last year she was at work on a follow-up, telling WWD in March that she’d ‘locked herself away’ to focus on making an album.

She left the school half way through taking her A-Levels in order to pursue her role in Terra Nova.

Terra Nova is an American science fiction drama television series. It aired on the Fox Network for one season from September 26 to December 19, 2011. The series documents the Shannon family’s experiences as they establish themselves as members of a colony, set up 85 million years in the Earth’s past, fleeing the dystopian overpopulated and hyper polluted present of the mid-22nd century. The series is based on an idea by British writer Kelly Marcel with Steven Spielberg as executive producer. On March 5, 2012, Fox announced that the show had been cancelled.

12. She was later discovered by British pop singer Kelle Bryan from the all-girl band Eternal, who signed her as a client:

She used to work with Girls Aloud’s song writing team After being discovered by a member of Nineties girl group Eternal (Kéllé Bryan, not Louise Redknapp), Naomi went on to work with Xenomania, the production team responsible for the best bits of Girls Aloud and the Sugababes’ discography. Sadly, whatever she recorded with them was never released, but she’s thought to have honed her song writing skills with the group.

Long before her casting as one of Disney’s best-loved princesses, Naomi’s first acting role came courtesy of the Mouse House. Back in 2008, she appeared in the UK Disney Channel’s Life Bites, a series following the fortunes of a friendship group in a London school (among her castmates was Jeremy Irvine, who’s since joined the Mamma Mia! extended universe playing a younger iteration of Pierce Brosnan’s character). She then made a jump across the Atlantic for another Disney project. Lemonade Mouth, a drama from the same song sheet as High School Musical, told the story of five students who form a band after meeting in detention. Hey, it worked for Ryan Gosling, Brie Larson and, ahem, the Jonas Brothers.

14. In 2010, she was cast as Mohini “Mo” Banarjee in the 2011 Disney Channel original movie Lemonade Mouth, her first role in an American production:

In 2011, she played Mohini “Mo” Banjaree in the Disney Channel Original Movie Lemonade Mouth. In 2015, she posted a picture hanging out with her Lemonade Mouth costar Bridgit Mendler.

15. That same year, she was cast as Maddy Shannon, in the science-fiction series Terra Nova which premiered in September 2011 on Fox:

She worked with Steven Spielberg when her major US role came courtesy of Terra Nova, a dystopian sci-fi drama produced by the critically acclaimed director.

Naomi played Maddy, a teen whose family is chosen to join a new colony in a parallel time stream, while Earth faces an overpopulation crisis. After airing in 2011, it was cancelled. Season 2 does not exist.

16.  In 2013, Scott appeared in the music video for the song “Hurricane”, by her Lemonade Mouth co-star Bridgit Mendler:

Check out the song below:

17. Scott was cast as Ryoko in The Martian. She filmed her scenes but they were removed from the final cut:

After her show Terra Nova was cancelled with just one season, Naomi went on to re-visit sci-fi with a brief role in The Martian, appearing in the film’s extended version

18. She was cast in a leading role as Kimberly / Pink Ranger in Power Rangers (2017), the film adaptation of the TV series of the same name:

In 2017, Scott starred as the Pink Ranger in the new Power Rangers movie, meaning she already has experience playing a character near and dear to the hearts of ’90s kids.

19. In July 2017, Scott was cast as Princess Jasmine in a live-action remake of Aladdin:

Her Aladdin casting sparked some debate as not everyone was happy with Disney’s decision.

Jasmine is Middle-Eastern, whereas Naomi has British and Indian heritage – so her casting represented a missed opportunity to spotlight an Arab actress, or proof that Hollywood all too often sees women of colour as ‘interchangeable.’

Neither Disney nor Naomi has commented extensively on the polarizing topic.

20. Naomi shares a stylist with a royal:

She’s already a front row regular at fashion shows and shares a stylist with Lady Amelia Windsor! Since the release of Power Rangers last year, Naomi has been a guest list regular for some of fashion month’s most in-demand catwalk presentations. Last season alone, she attended shows by the likes of Stella McCartney, Loewe, Valentino and Erdem – is this thanks to her stylist? Could be!

Naomi has been fine-tuning her red carpet style with the help of Zadrian Smith, a fashion director who also counts one of our most stylish minor royals, Lady Amelia Windsor, among his clients.

While out during Paris Fashion Week last year, Scott spoke with WWD about her relationship with her stylist. “Zadrian Smith is my right-hand man, slash angel, slash everything,” she told the magazine. Smith explained that the gorgeous looks that Scott appears in aren’t solely up to him, and that their work together is often collaborative by nature. “She’s very, very, very involved in her vision and her aesthetic and what she wants to communicate visually,” he said.

A Comprehensive Guide to Interpersonal Communication