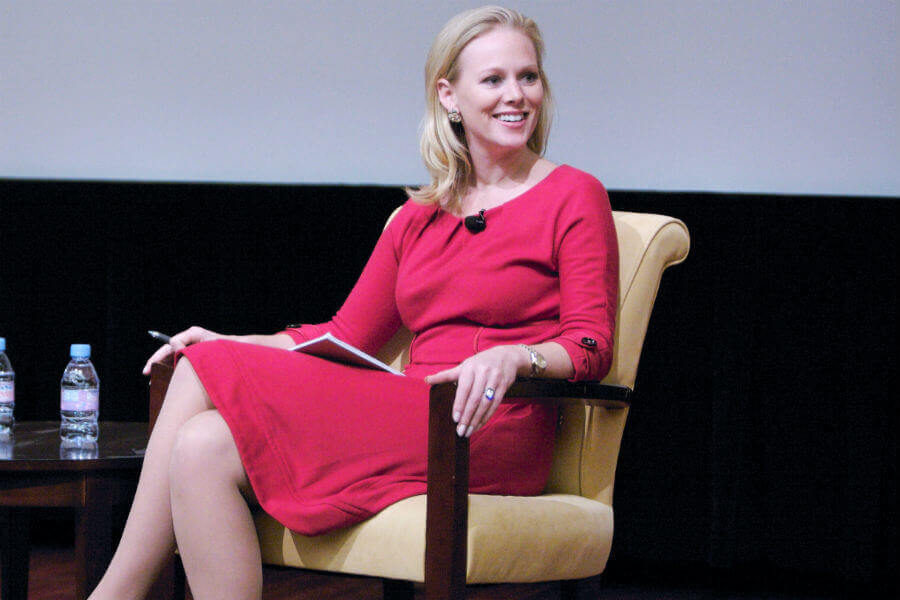 The supremely intelligent and stunning Margaret Hoover is a renowned conservative political commentator. Over the years, she has also emerged as an impactful media personality, political strategist, LGBTQ rights activist, feminist and bestselling author. She also happens to be the great-granddaughter of the 31st American President, Herbert Hoover. Her 2011 book, American Individualism: How A New Generation of Conservatives Can Save the Republican Party is a certified bestseller. Hoover is also the hostess of the reboot of the famous conservative PBS show, Firing Line. She was named the Journalist of the Year by The Algemeiner Journal for her stellar job on the show in 2019.

Margaret Hoover’s firm belief in conservative values makes her value personal freedom a lot and as a result of that she is a staunch feminist and LGBTQ rights advocate. Her socio-political commentary pieces have also been published in popular newspapers like The Wall Street Journal, The Daily News and The Daily Beast.

Margaret Claire Hoover was born to Jean and Andrew Hoover on December 11, 1977 in Colorado. She enrolled in the Graland Country Day School, Denver and completed her primary education over there. After finishing high school, she joined Bryn Mawr College and graduated with a B.A. in Spanish Literature (with a minor in political science) in the year 2001. She was also a student at Davidson College for two years, but dropped out of without finishing her degree.

After graduating from Bryn Mawr College, Margaret Hoover went on to work as the Associate Director of Intergovernmental Affairs for the George W. Bush administration at the White House. She was also a part of Bush’ re-election campaign in 2004. During former New York Mayor Rudy Giuliani‘s presidential bid in 2006-07, Hoover was the Deputy Finance Director for the campaign. Her illustrious career in the highest level of American politics also includes a stint in Congressman Mario Diaz-Balart‘s staff and an advisory role for the Deputy Secretary at the Department of Homeland Security.

Margaret Hoover’s political acumen and debating skills were on full display in 2011 when she participated in an IQ Squared Debate at New York University‘s campus. In a debate over ‘The Sustainability of Current Entitlement Obligations to a New Generation of Americans’, she faced off against Howard Dean and Jeff Madrick. During the same year she also criticised incumbent President Barack Obama‘s decision to remove troops from Afghanistan and called it a ‘political move to get himself re-elected’.

Margaret Hoover is also a board member of the Herbert Hoover Presidential Library Association, the Belgian American Educational Foundation and Stanford University’s Hoover Institution. The American Foundation for Equal Rights and GOProud also have Hoover on their Advisory Council.

Margaret Hoover has been heavily involved in the LGBTQ rights movement throughout her political career. She co-founded the American Unity Fund in January 2013. AUF is a not-for-profit organization driven towards advancing and advocating LGBTQ rights in America. The AUF works at both the state and federal level, rallying Republican support for same-sex marriage and an end to sexuality-based discrimination. Margaret Hoover’s work as a humanitarian shouldn’t come as a surprise to anyone as her great-grandfather and former American President, Herbert Hoover was also a humanitarian and a pivotal figure in the formation of several international non-governmental organizations. In January 2011, she testified in front of the Maryland Senate in support of gay marriage and was actively involved in the legalization of gay marriage in the state of New York in 2012. During the 10th anniversary of Freedom to Marry in 2014, Margaret Hoover was introduced by American actress and activist Cynthia Nixon as such: “Margaret Hoover appeals to the pragmatism of the millennial generation, she believes constitutionally guaranteed rights ought to transcend left versus right, and Democrat versus Republican, and she does so with savvy, skill and style.”

Between 2008 and 2012, Margaret Hoover was also a major contributor on Fox News‘ very popular show The O’Reilly Factor with Bill O’Reilly. She appeared on the segment ‘Culture Warrior‘ and debated O’Reilly on a wide array of topics ranging from politics to popular culture. After her stint with Fox News, she became a political contributor for CNN. She stayed with the network till 2018. She left CNN and moved to PBS to host the reboot of its Firing Line show. Hoover has appeared as a frequent guest on HBO‘s Real Time with Bill Maher, while also making occasional appearances on shows such as ABC‘s Good Morning America, CBS‘ The Early Show and The Late Show with Stephen Colbert and NBC‘s Today.

Margaret Hoover has also been critical of the Trump administration of late. She has claimed that people who have uttered even a single word of criticism against Donald Trump in the past have no chance of working for the administration and that ‘outlandish remarks get you on the Trump team‘. While appearing on The Late Show with Stephen Colbert, Hoover said that the GOP (Grand Old Party, used to refer to the Republican Party) has been ‘Trumpified’.

French Fashion Guide: How To Dress Like A French Woman

What is the Best Way to Use a Car Air Conditioner?