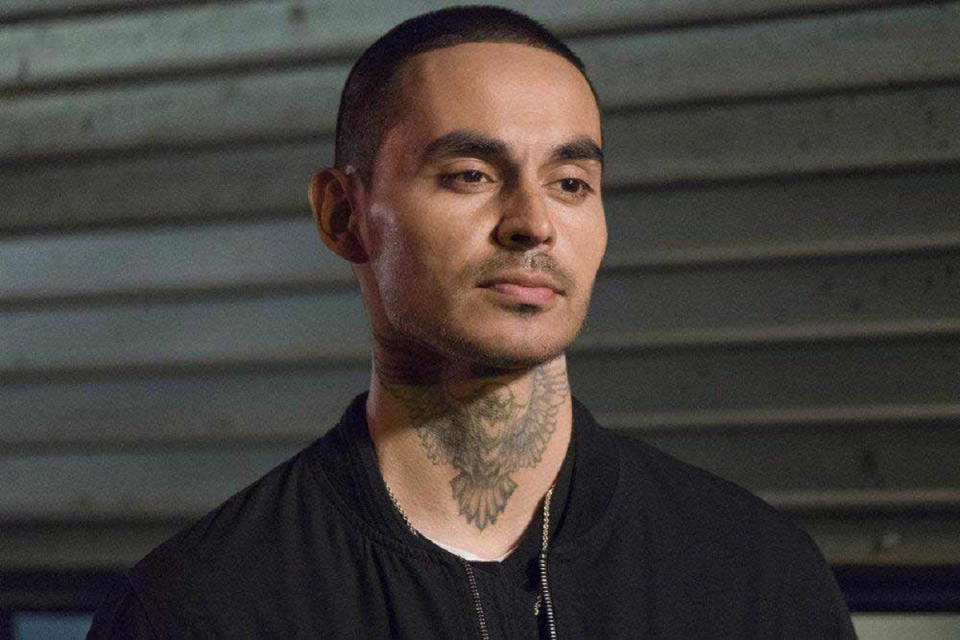 Manny Montana is an American actor you have seen in Good Girls, an American crime comedy-drama television series based on three suburban Michigan women, two of whom are sisters, struggling to earn a living. Since 2018, he continues to thrill in the role of gangster Rio in the NBC series which also airs on Netflix. But before this show became his primary career in 2018, he was assigned to act in the role of Johnny Turturro between 2013 and 2015. Let’s take a look at how the actor came to take up these iconic roles, turning his past into a vessel for his future.

Manny Montana (Bio): From Googling How To Become An Actor To Playing Tough Guy Roles

Career as a tough guy:

After having acted in some minor or secondary roles, in cinema, and on television, he became known by the role of Johnny Turturro in the police television series, of the USA Network, Graceland (2013-2015).

Also in 2015, Montana was cast in the role of Lozano, a “wanted criminal” on Michael Mann’s Blackhat. Montana admitted that he auditioned for a lead role and didn’t get it, but was offered a supporting role, which he accepted without hesitation.

In 2016, Montana appeared in the series Conviction. He plays the role of Franklin “Frankie” Cruz, an ex-convict who works for the CIU (Conviction Integrity Unit) as a forensic technician5.

He then joined the main cast of the short-lived ABC network drama series, Conviction (2016-2017) and won the first male role in the series that mixes comedy and action, Good Girls (2018-), from the NBC network.

In Good Girls, the story revolves around three women who are tired of having everything taken away from them, so they decide to carry out an unlikely robbery by robbing a supermarket, only to find that more than they bargained for awaits them. While that is happening, Manny Montana is cast in the role of Christopher who is a high-ranking criminal who runs a money laundering business.

Manny Montana came into this world on September 12, 1983, and was raised in Long Beach, California. He is of Mexican American origin.

While he plays the cynical character Rio on the hit show, Good Girls—he is far from it as he recalls growing up in Long Beach, watching Telemundo with his dad on TV.

He was going to pursue football before acting:

After graduating from Jordan High School, the future actor earned himself a football scholarship to California State University Sacramento, but Montana was forced to quit after an arm injury and an eighth dislocated shoulder.

Although he saw one of his dreams dissolve in a fit of a football injury, it helped him discover a new passion for acting. This new career path would help him tap into the same emotions which he realized he had restricted early on.

Thanks to acting his tough façade would now be replaced by a genuine commitment to wearing his emotions like a badge of honor.

“I feel like acting was the only route for me after football,” according to his interview with a magazine. “And I feel like I should have been doing it over football if I’m being honest, because I feel like every kid, especially from the hood, knows how to act because a lot of us don’t want to be hood. We just want to be able to laugh and joke and have fun like we did as kids.”

Manny Montana pours himself into his craft of creativity, which arose from growing up bearing a shield, one he doesn’t mind taking down now.

“I wasted so many years trying to be tough and not showing my emotions and not telling people what I feel about them, because nowadays I just do that shit off the cuff,” he explained.

“I don’t want to do this tough guy shit anymore. And when I go and talk to schools and stuff, that’s the first thing that I tell, especially males.

He poignantly advises to shake it off because it doesn’t help, despite what someone thinks in the short term. He continues by saying: But, man, I’m telling you, in the long run, this shit does not help.”

Injuries led him to googling how to be an actor:

Montana, who grew up playing on the Jordan High School gridiron where he would earn a scholarship to Cal State Sacramento, loved competition!

Whether it was or sitting back watching boxing on Telemundo with his dad, early brushes with sports formed the idea that he would go into sports and even coach and mentor the younger generation.

But it was in football that he learned that we cannot dictate what unfolds over the course of our professional years. This valuable lesson game gift wrapped in injuries.

He recounts the moment that he hit a wall where he lost his spot on Cal State Sacramento’s football team and endured the gut-wrenching feeling of finality.

It was this life-changing watershed moment that would eventually lead to him packing up his car and driving home to Long Beach. The emotion of the moment made him call his dad and his mom and cry. He said: You know, what’s a parent going to do? They’re just like, it’s going to be OK. You’ll find something else to do.”

And boy did he find his ethos in something else! With the realization that his football days were in the past, he now had time to sink his teeth into another dream. This was the day the future star Googled how to become an actor.

He worked as a DJ:

He transferred to California State University, Long Beach, majoring in journalism and broadcasting. He works as a DJ at the school’s student radio station, earning him an internship at Power 100.32.

Most recognisable for being the tough guy, in his current role as the beloved villain Rio, Manny would take up  so many films and one-off television roles to work his way through being a renowned criminal we all know.

This dedication to authenticity paid off!

After graduating in 2006, Montana began acting in student films which eventually led to him being featured in episodes of various television series.

Between 2013 and 2015, Montana played Johnny “J.T.” Tuturro in the action crime series Graceland.

Yes, Manny Montana is married to coach and blogger Adelfa Marr, who makes a small appearance in Season 2 of Good Girls.