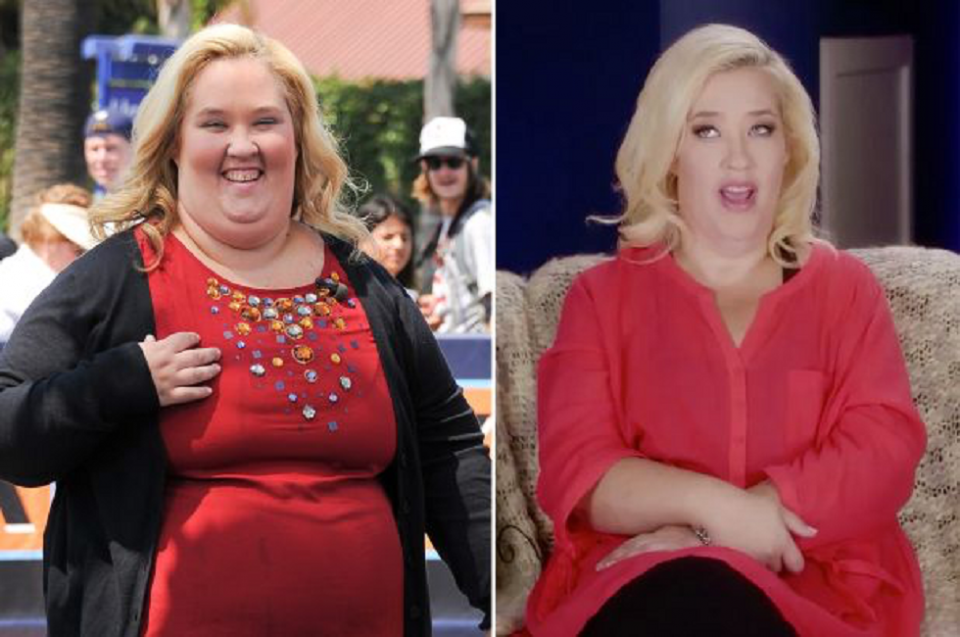 June Shannon aka Mama June worked hard to get her slim figure and worked even harder to keep it a secret before her big TV reveal. The reality star, who once weighed 460 pounds at her heaviest, slimmed down to fit into a size 4 dress to show off her new body at her ex Mike “Sugar Bear” Thompson’s wedding to his new girlfriend. So, June got gastric sleeve surgery in 2016 and began a new diet plan.

Although her daughters Alana “Honey Boo Boo” Thompson and Lauryn “Pumpkin” Shannon initially did not encourage Mama June’s weight loss efforts, they seemed to be happy for their mother. So did the public. In 2017, the mother of four’s transformation and her family’s reaction to her weight loss was chronicled on the new WE TV reality show Mama June: From Not to Hot. Aside from the reactions, here are 4 crazy things that happened with Mama June: From Not to Hot which you may not have known:

4 Crazy Things That Happened With Mama June: From Not to Hot

Many don’t know that before the show premiered, Mama June went into hiding from the paparazzi so that her transformation would not leak online. Shannon’s transformation had been detailed through the years on her own reality show, which first saw the Georgia native undergoing extensive surgeries to create an entirely new body.

Her procedures reportedly cost a staggering $75,000, which included a breast augmentation, tummy tuck, liposuction and veneers worth an estimated $10,000, according to People magazine.

“It’s been really hard for her, because my mama is not just a person who can stay in the house,” Alana told People. “My mama is very outgoing and stubborn. So when she’s like, ‘Let’s go to the grocery store,’ we’re like, ‘You can’t, because you have to stay in hiding, you know.’

“And then she’s just like, ‘No, I have to go out, I’ll just put on big clothes and they will never see me,’ the daughter stated. “The craziest disguise that she’s done, she went out with this big jacket on, glasses, a hat, and a scarf. She went overboard.”

It worked, none of us were the wiser and Mama June was free!

Kenya Crooks, her personal trainer, has been helping the reality star with her diet and fitness regimen. He made his debut on the show on episode two.

“Her manager came to me, because she had hit a plateau,” he stated to E! News. “I’m the closer.”

So he got June’s kids eating healthy too.

“I always look at it from a team standpoint…we have to do it as a family,” he told E! News. “We can’t have two separate menus because something is going to fall apart eventually.”

However, the kids didn’t support this.

“At first, we didn’t want to participate in the fact that she was eating healthy and things like that,”….”But as I went along, we could tell that she really needed the support. So we did the meal plans with her.”

With the help of some pro tips and recommendations, June’s diet had her temporarily cut out not only junk food, but most carbs. “She liked to do the pizza stuff, the spaghetti stuff,” he told Rodney Ho’s AJC Radio & TV Talk blog. “She was really really huge into bread. We had to cut that out and monitor how many calories she was taking in.”

Alana did not appear impressed with her mother’s weight loss journey on the show. In fact, she was the only one to say that her mother looked “fine” before.

“I’m not jumping on any bandwagon, unless it has like, cheeseburgers and stuff,” “She can’t eat like, chips or anything, she has to eat like carrots or something.” “That or she has to eat in smaller portions now,” Lauryn added. “She can’t have like this big ol’ buffet.”

Alana and Lauryn also stated to a magazine the family has been eating meals consisting of ingredients such as green beans, butter beans and salmon. But she was allowed to have some junk food in their house. It is unclear if June herself indulges.

“Once a week we’ll get like something to like treat ourselves to..maybe twice a week,” Alana said..,,There is junk food in the house but it’s not like we eat it every single day,” Lauryn added. “She just wants us to be healthy too, she just doesn’t want us to be outrageous with it.”

Fast forward to the ending of Season 3 and the news broke out that June and her boyfriend, Eugene ‘Geno’ Doak, were arrested on March 13, 2019, at a gas station in Alabama. The two of them were both arrested and charged with felony possession of drugs and drug paraphernalia. This incident caused the whole show to go crazy and gained a huge amount of controversial attention.

With Geno facing an additional charge of domestic violence and Mama June in possession of crack cocaine and drug paraphernalia, the arrest was imminent. The couple’s first court appearance was in October 2019, when they pleaded not guilty.

Sadly, Mama June has since been on the road and in a dysfunctional relationship with boyfriend Geno Doak, much to the dismay of her children who have been picking up the pieces following their mother’s antics.

“I don’t even know who she is anymore,” Honey Boo Boo says about her mother as headlines flash about June allegedly using crack cocaine.

Meanwhile, Pumpkin bluntly calls Geno a “piece of sh**,” and says, “I don’t think Mama really understands that everything she does affects all of us too.”

Mama June Shannon had a teary melt-down and showed her rotting teeth as her family tried to stage an intervention in the new trailer for Not to Hot, Mama June: Family Crisis.

Season 4 of the reality show follows 40-year-old June as well as two of her daughters — 20-year-old Lauryn (“Pumpkin”) and 14-year-old Alana (“Honey Boo Boo”) who  addressed June’s recent issues with an intervention. Mama June seemed to show up to the intervention and smiled as she met producers in the parking lot.

As soon as she walked into the room, the reality star broke down in tears upon seeing her family. Mama June has been in a quickly descending spiral of addiction and she said: ‘Nobody knows what the real story is,’ with a trembling voice.

There’s even a rumour that Mama June Shannon won’t receive a penny for her new show “Mama June From Not To Hot: Family Crisis”.  This comes with much relief to the family as they are afraid that she might use the money to buy drugs. Despite the arrest, June refused to seek out any help for her addiction, much to her family’s shock. She was also barred from any access to her daughter Alana’s money. Alana, aka Honey Boo Boo, currently lives with her sister Lauryn, as June is in no way fit to care for her children.

As we saw from the Mama June: From Not to Hot finale that aired in May, Honey Boo Boo got emotional as she explained why she wasn’t living with her mother.

When June didn’t listen to Honey Boo Boo’s claims, her daughter shouted, “It’s not by choice! …I would love to come home and stay with you and tell you about my day but I can’t do that because I’m scared. I’m not even gonna lie to you, I’m scared to stay at your house.”

This family dynamic will be the central focus of Mama June’s new TV show, Family Crisis.

How CBD Oil Can Help Heal Your Back Pain