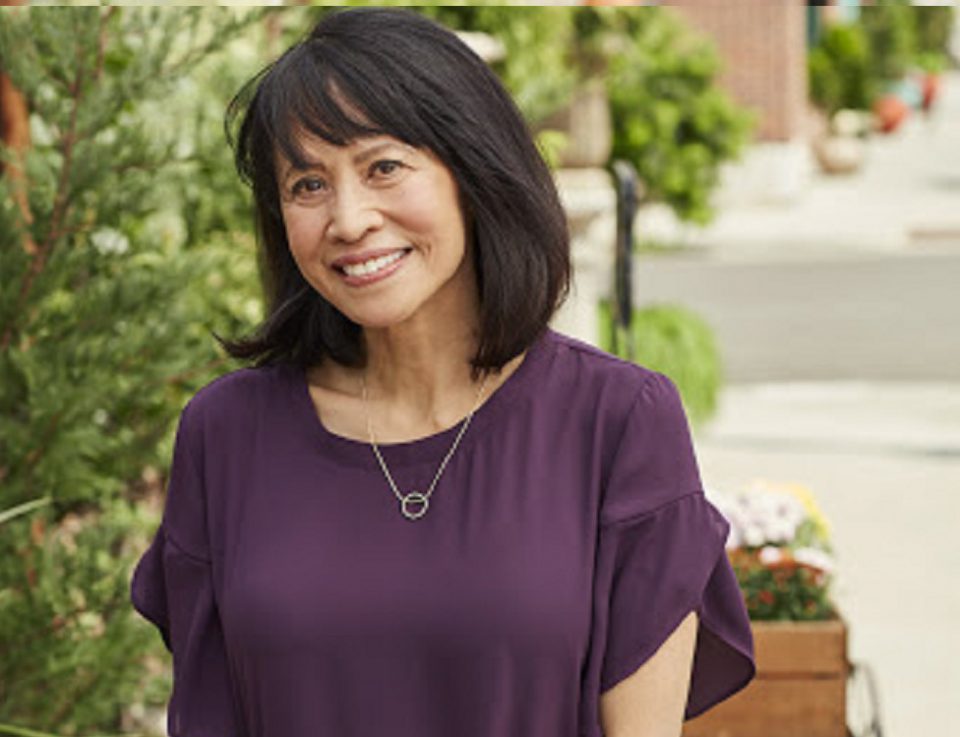 “I think most actors are pretty sensitive. That’s why we’re doing what we do because our emotions are right on our sleeve,”

That’s Lauren Tom an actress par excellence born on August 4, 1961, in Chicago Illinois. This 59-year-old American actress of Chinese descent is married to Curt Kaplan and has two sons Oliver and Leo Kaplan. She grew up in a Jewish neighbourhood and was brought up as acatholic taking dancing lessons as a young girl.

It was at 17 that she landed up with a spot with a touring company of A Chorus Line (1975) and got her first break in the Broadway production of the show. It was less than a year later in the role of Connie. This awarded her with an Obie award and she was cast in Broadway shows Hurlyburly(1984) as Donna and Doonesbury (1983) as Ching ‘Honey’ Huan. Later on in Chicago, she acted in the Goodman theatre’s production. It was titled, ‘Tis a Pity Shes’s a Whore’ as Annabelle and also acted in American Notes as Pauline.  This aside Lauren has worked with directors such as Peter Sellars and Joanne Akalaitis at the Goodman and Guthrie Theaters, the La Jolla Playhouse and the Kennedy Center.

Lauren Tom, she also has to her credit personal essays in Brain, Child Magazine, East West Woman, Strut and Freshyarn.com. She is also working on a book based on these essays.
Yet, for this petite and demure woman of 5.1 and 1/2 inches, it’s her acting which identifies her the most.
In her interview in Pop Spectrum, where she was asked where she felt in her natural element, she promptly said:

Roles in the Television Series

Lauren Tom first appeared on television as Miko Wakamatsu on The Facts of Life. This was followed by her appearance in The Equalizer, Catfish With Black Bean Sauce, Thirtysomething, Quantum Leap, Chicago Hope, Homicide: Life on the Street, Grace Under Fire, Friends, The Nanny, The Middle, DAG, The Division, Monk, My Wife and Kids, Barbershop: The Series, Grey’s Anatomy, The Closer and Men in Trees.

Lauren Tom also starred for three years from 2016-2019 as a series regular in Andi Mack on The Disney Channel.

However, her shining career is not without its share of awkward moments. This is where the woman Lauren with her sensitive emotional side came face to face. Sharing how shocked she was when the audience actually ‘booed’ at her. She said, “I just was so shocked that they were booing me. And, of course, I was trying very hard not to get my feelings hurt. I had to get used to that. I did understand intellectually that, you know, the audience was meant to be rooting for Rachel.”

Lauren Tom as this very accomplished multi-faceted actress has innumerable films to her credit. Though most of the films had her in a small role it was as the dedicated daughter, Lena St. Clair, the young Chinese-American girl that she played as the lead in The Joy Luck Club in 1993 that gave her lot of acclaim and led to subsequent roles in other films such as When a Man Loves a Woman and North.

In 2003 Lauren Tom appeared in a live-action film Bad Santa and a critical film In Good Company in 2004.

Her smaller roles in movies included Nothing Lasts Forever, Wall Street, See No Evil Hear No Evil and Blue Steel. Her biggest role before The Joy Luck Club was as a waitress in the film Cadillac Man. She also appeared as a guest on The Tonight Show Starring Johnny Carson.

Lauren Tom received the Obie award for her Broadway production and received DramalogueAward for best performance and best direction for her unique solo performance in “25 Psychics”.

Lauren Tom had started with the animated series Superman: The Animated Series playing Angela Chen. Tom began vocal work in the animated series in Dana Tan, in Batman Beyond and had minor roles on Pinky and the Brain. Other works include Extreme Ghostbusters and The Zeta Project.

In a unique and commendable way, Lauren Tom did the voices for both mother and daughter characters on two animated TV comedy series: in Futurama. Here she has explored her voice acting skills while impersonating two characters in the same story, to playing as Amy Wong and her mother Inez, while on King of the Hill she voiced Minh and Connie.

In a series of animated shorts satirizing the 2000 U.S. presidential election, she voiced the character Honey Huan in media related to Doonesbury.

Then there were All Grown Up!, Rocket Power, Max Steel, Handy Manny as Mrs Lee and Nelson, Samurai Jack, Johnny Bravo, Justice League Unlimited, Kim Possible and Legion of Super-Heroes where too one can hear the voice of Lauren Tom.

In 2010, she did the voice of Song, Bai Li and Ming on the animated series, Kung Fu Panda: Legends of Awesomeness and also played the role of Jessica in the animated film, Scooby-Doo!Camp Scare.

Mulan II, Kim Possible: The Secret Files, Kim Possible Movie: So The Drama, Batman Beyond: Return of the Joker.

The four Futurama movies: Bender’s Big Score, The Beast with a Billion Backs, Bender’s Game and Into the Wild Green Yonder. More of her works include World of Warcraft: Mists of Pandaria, and Turbo FAST.

It was the solo show of Lauren Tom, “25 Psychics” based on her quest for inner peace, which had premiered at HBO’S U.S. Comedy Arts Festival in Aspen, which received the DramalogueAwards, for Best Performance and Best Direction.

In many ways the movie The Joy Luck Club reflected the early years of Lauren Tom when she and her brother were born and grew up in Chicago as the Chinese American, unlike their grandparents who had come from Kaiping, Guangdong, China. Her parents Nancy (née Dare) and Chan Tom, Jr., were born in Chicago and worked in the frozen food business.

daughter, and later on as an actress. In her earlier days as a theatre artist, she faced a lot of discriminations and knew that “roles of substances” that her white girlfriends were going to the audition for wasn’t going to happen to her and that it needed more work.

Her take on Diversity

“To have more diversity in entertainment because it’s more reflective of the real world. And if the goal is to move people as artists and to make them feel that they can connect to the characters and the show that they are trying to create then you have to make it as authentic as can be…”

“My hope for the future of films and television for Asians is that it will become so mainstream that we won’t be having this conversation anymore….”

Hope burns eternal in our hearts and she too believes in the power of the # tag and the other modes of social media that can stand up against discrimination and act collectively to bring about the much-needed change of equality and acceptance on basis of talent and not colour.

Taken from her interview with Weareresonate.com