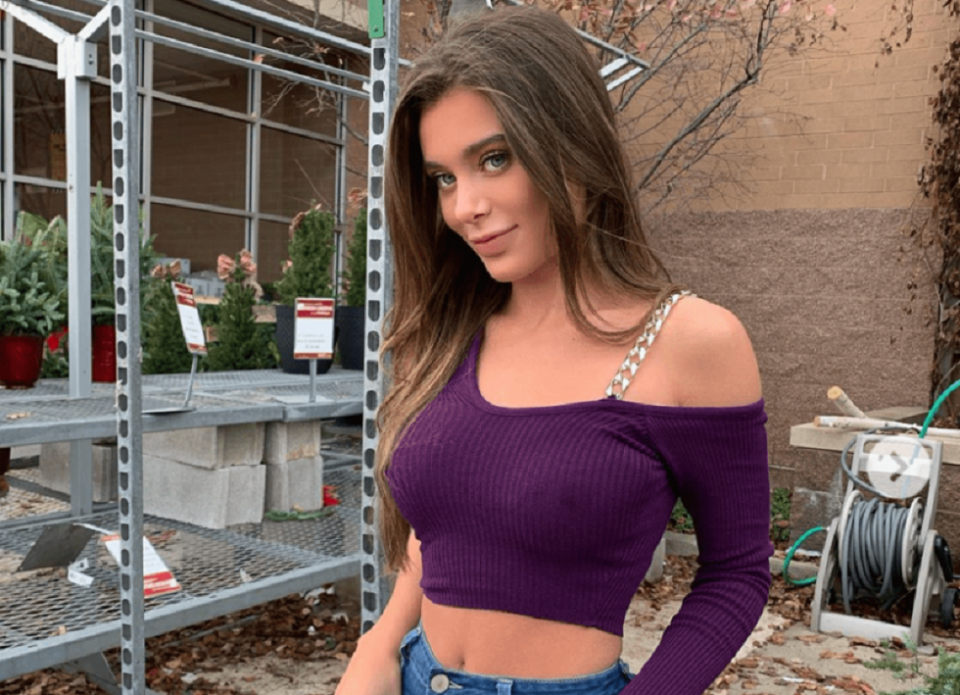 American actress, ex-porn star and social media model Lana Rhoades gained fame from working in the Adult industry. If you’re wondering how old she is, she was born on September 6, 1996, so as of 2021, Lana Rhoades‘s age is 24 years. Lana hails from Chicago, Illinois, United States but the actress and social media influencer grew up in McHenry, Illinois. At the age of 18, she moved to Los Angeles to begin her career in adult entertainment. She began her career in 2014 with a photoshoot for Playboy Cyber Girls, and in 2017, she entered the adult film industry. Lana Rhoades went on to become one of the most popular names in the industry, and she also won several awards and nominations in the industry. In 2018, Lana Rhoades decided to quit the adult entertainment industry to work on her personal projects.

Wondering what her real name is? Keep scrolling down to check out more facts about Lana Rhoades or should we say Amara Maple!

The ex-pornstar and Chicago native graduated high school early at 17, and was in gymnastics and cheerleading all throughout school. Her parents don’t know what she does for a living and the ex-porn star believed they would never find out, but this is exactly the kind of thing that brings in the views so, in one of her videos, she said that when they heard of her career choice, her mom started crying. But, after some time, she made them believe that she would just be the same regardless of her career choice. Luckily for her, they started supporting her decisions and she has a good relationship with them.

Not only did she perform well in cheering and other sports, but she also performed well at work: at the Tilted Kilt, a sports bar. Before working there, she moved close to Chicago, and a few months before turning 18 she bagged the sports bar job at Tilted Kilt.

Unfortunately, Lana Rhoades went to Oakton Community College, but she couldn’t finish her degree because she began working in the adult entertainment industry. Of course, we all know that she left Tilted Kilt and worked as a stripper.

In an interview with No Jumper, the ex-porn star stated she had lost her virginity at age 18 to the man she married.

On October 30, 2020, Majlak posted on his channel a video titled, “we broke up”, in which he publicly stated that their relationship ended. The video of him explaining things garnered over a million views in less than twenty four hours.

Lana Rhoades claimed that a star with 43 million followers on Instagram and over $USD80 million a year contract messaged her. A lot of fans who heard this speculated that it was either Gareth Bale (42.9 million) or Marcelo Vieira Jr. (43.9 million).

Lana recorded the first hardcore scenes in April 2016 after moving from Chicago to Los Angeles and quickly became a phenomenon to a wider audience. Lana’s first scene was a solo scene for FTV girls in which she did a foot fetish and used a few sex toys. With 5 months, Lana got

From April to August 2016, Lana Rhoades worked for the Spieglergirls agency, and from January to the beginning of October 2017, she was represented by LA Direct Models. Currently, we are not sure if she is affiliated with a modeling agency but she does a LOT of Instagram modeling and books a lot of brands where she’s employed to market everything from sex-related things, to male products to Fashion Nova boots! (She does a lot of it in the nude).

Lana Rhoades started her YouTube channel on February 20, 2019, and uploaded her first video titled “Back To School Try-On Haul || School girl edition.” Since then she has been uploading various makeup tutorials and tricks, beauty tips, product reviews, and travel vlogs.

Till now, out of all her videos, “Q&A with Lana Rhoades” is the most popular video on her channel. It has garnered more than 1.3 million views as of now.

Currently, she has more than 920k subscribers on her channel with an average of 100,000 views daily. She has also been featured in many music videos for music artists wherein in one song she played the part of a sexy librarian.

She along with Alexa Adams and Olivia Davis hosts the 3 Girls 1 Kitchen podcast where they give sex advice.

Lana Rhoades is a fan of the Red Hot Chili Peppers, Batman, and The Avengers. She’s also a caretaker of her dogs.