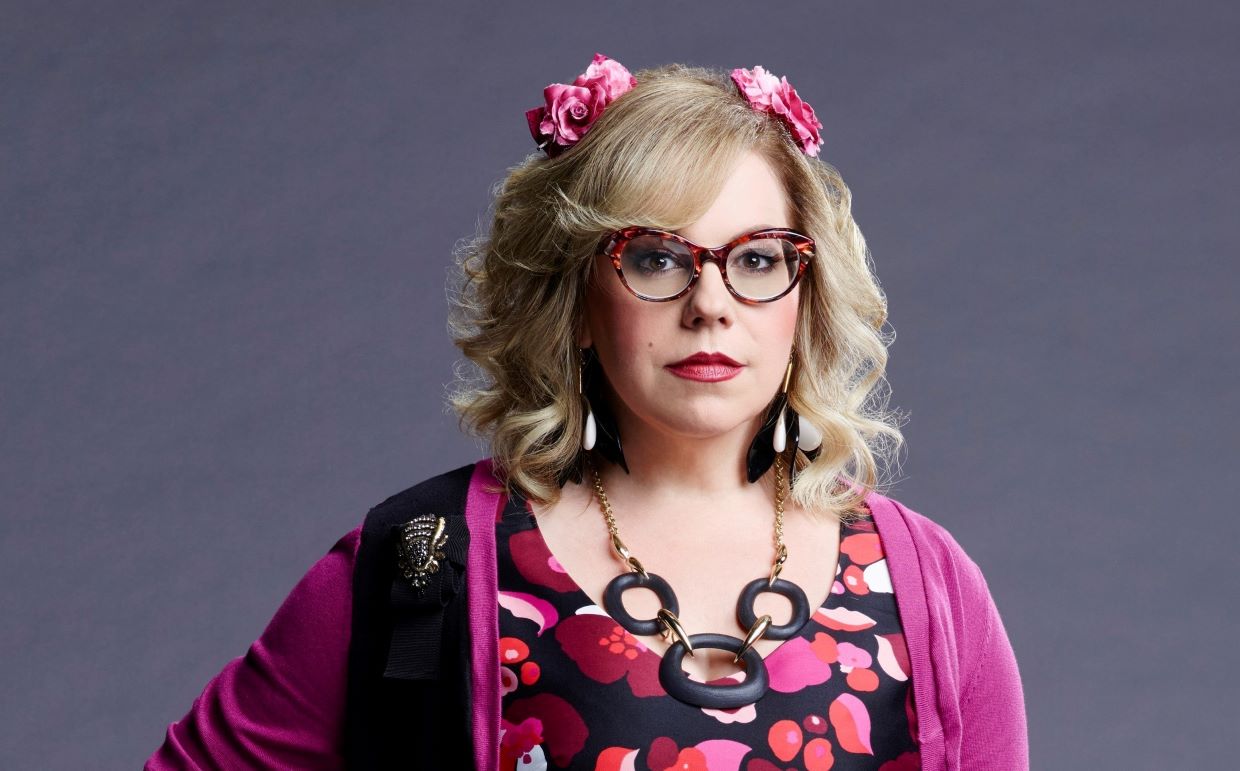 Did you know that the actress who played Penelope, Kirsten Vangsness once had a lisp, was super shy and randomly ended up acting?

The Kirsten Vangsness we know now is eloquent like Penelope Garcia, but it wasn’t always that way. During her childhood, Vangsness had a lisp and had to undergo three years of speech therapy while in elementary school to correct the lisp. In an interview with Inspirer, the actress revealed that, along with having a lisp, she was very shy, and it made her a target for bullying by classmates. “I got bullied a lot and I basically stopped talking in the eighth grade,” she said thinking back to her difficult time in grade school.

As an advocate for the prevention of bullying, she did an It Gets Better video to remind kids that being different is okay and so is letting your “freak flag fly.”

During her childhood, Kirsten was also known as the chubby one amongst most kids her age. The American actress had struggled with being overweight for most of her life, and because of her condition, Kirsten was a shy teenager until she started acting.

She used to act in front of large crowds and was good at it bagging several honors in theatres in LA. But her confidence didn’t start immediately. Kirsten Vangsness was raised in Southern California’s theater community but didn’t quite fit in. Her father was a band director and an opera singer too but Kirsten would go on to take a totally different path from music.

“From the time I was about 7 until I was about 13 or 14, I looked like I was Pat from Saturday Night Live,” she laughs. “I’m not exaggerating, remotely.” Maybe that’s why she developed her own unique sense of style: “I dress like a 7-year-old space pilot. I have clothes that I still wear regularly from high school. My mom would give us $20 and she would send us to the thrift store, and I would [buy] a faux fur coat with a pimp-daddy collar and some sort of nature scene polyester dress.” Now this form of style has played into her character’s looks and fashion.

Although Vangsness had an interest in acting from a young age, it wasn’t something that just happened randomly.

“I came into it by accident. My dad did a lot of performing in community shows, and my sister and I would play background characters. However, my sister would play the ‘teenager’ where I would be the ’70 year old woman.’” She also revealed that her parents made her take acting classes after the bullying became so bad in the eighth grade that she stopped speaking. “I was really scared by the first few assignments were just of pantomiming. So I didn’t have to talk. At the time I hadn’t gotten an A in anything, but I kept getting A’s in this class. It became something I knew I wanted to do but I couldn’t do it for a living. I didn’t give myself permission to do it for a very long time.”

In 2005, Vangsness grabbed the biggest break of her career to date with the role of ‘Penelope Grace Garcia’, the technical analyst of the Behavioral Analysis Unit in the crime drama television show ‘Criminal Minds’. She played a guest role in the first season and became a part of the main cast from the ensuing season. Besides her, the series features the likes of Mandy Patinkin, Thomas Gibson, Shemar Moore, Matthew Gray Gubler, A. J. Cook, Joe Mantegna, and Paget Brewster. Vangsness has also appeared in a recurring role in two of its spin-off shows, ‘Criminal Minds: Suspect Behavior’ (2011) and ‘Criminal Minds: Beyond Borders’ (2016-17).

While starring on Criminal Minds has now defined the actress’s career, it could have been much different as her character was only supposed to be on the show in one episode and say a few lines. Due to the positive response to her character, they wrote her into another episode and it was up to Vangsness to create the character more fully. “I had to develop her character more. She’s a product of my imagination, so in my imagination I want to be that. I don’t think I’d want to be that sweet though. She’s very sweet. She likes things that really aren’t my jam. I love that she loves machines and connects to that world, I just don’t connect that way. I’m much more of a hands on type of person, where she isn’t. When you get to play a character for 12 seasons, you start to share traits. I’m giving her more of me and I take more from her. But it’s fun that she’s different than me. I think she’s great, I really look up to her,” she said in an interview.

According to Vanessa, she identifies her on-screen persona as “geek chic, the-smart-is-sexy” kind of girl.

“There’s the size thing, the nerdy thing, the I’m going to dress like this, I’m not going to play dumb. [Penelope’s] sexuality comes from her sense of self, and I love that about her. I sort of borrow from her because she’s comfortable.”

The stylists on the set of the CBS’s Criminal Minds series have gotten a bit of Vangsness’s bright personality and spirit as well:

“They kept saying, ‘Can you bring your own clothes? We don’t have anything in your size.’ Because in Hollywood they have size zero and size 22,” says Vangsness, who is a size 12. “But if you lie somewhere between the 12 to 16 range…they keep trying to put you into a size 4. It’s the strangest thing. What ends up happening is they buy four size 2 Marc Jacobs dresses and make one size 12. Then someone out in TV land watches it and is like, ‘I can get that dress.’ No, you can’t because you don’t have a seamstress that will alter exactly to your body. I feel for everybody.”

Did you know that she also has work that has been published in the Los Angeles Times and has also written three episodes of Criminal Minds? They are 2015’s “Nelson’s Sparrow,” 2016’s “A Beautiful Disaster,” and 2017’s “Spencer.”

Kirsten Vangsness’s relationship has been a hot topic for most of the time in Hollywood. Her relationship status to the public has always been confusing as sometimes she is seen kissing a guy in public and sometimes being in a relationship with a woman. She identifies as bi-sexual.

Over the years, it was assumed that she was a lesbian because she began dating film and television and editor Melanie Goldstein in 2006, but after ending their engagement, the pair separated in 2013.

In 2014, The actress made her way down the red carpet for GLSEN Respect Awards and talked briefly on her fluid sexuality. “I’m getting better at accepting those parts of myself,” Kirsten Vangsness said about coming to terms with her sexual identity. Today she sums up herself “as Queer as a purple unicorn singing Madonna”.

“Two days ago it was national coming out day and I re came out as like I don’t know,” Vangsness said. “I was dating guys this year and I was explaining that while I was in high school I had a crush on this guy named ‘Ben’ then I had a crush on this girl named ‘Amy’. It’s sort of the same now, I feel like I come out to myself every day in like a different way and I kind of just figure it out.” That seems like the best way to go about things—we wish more people took that approach to their sexualities!

Who Is Kirsten Vangsness Spouse?

After a photo of Kirsten and Shemar sharing a kiss went viral, all of their fans and followers thought that they were dating each other. After lots of rumors, Kristen gave her explanation saying that they were just good friends.

After having lots of rumors and controversies in her life regarding her love life and sexuality, Kirsten she exchanged her ring with boyfriend, Keith Hanson in 2015.

Kirsten Vangsness has identifies as bisexual and dated Melanie Goldstein from 2006 to 2013. After dating for seven years, the couple decided to call off their engagement in 2013 as Kirsten had a change in her thoughts about sexuality.  Later she got engaged to actor Keith Hanson in 2015 after dating him for a while.

Before the legalization of same-sex marriage, Kirsten and Melaine were the type of couples that developed and showed their love to the world before the legalization in 2006. When they got engaged in February 2009, it happened in front of their close ones who knew they were dating for the past two and a half years.

The actress Kirsten Vangsness started making big changes back in 2014 when fans witnessed her gorgeous new body for the first time as she appeared at the 10th Annual GLSEN Respect Awards. She exercised in the gym and ate healthy food. There are a lot of rumours about her diet, where people even thinks that she consumed pills for weight loss, but the TRUTH about Kirsten Vangsness’s weight loss was explained by the actress herself:

“..I lost some weight. I did it by reading a book & listening to a (free) podcast by @StephensRenee .so there. Go forth & educate thyself”.

Renee Stephens is a diet and weight-loss advisor. Her program was built around those that have tried everything to lose weight but nothing worked. She believes that changing your relationship with food is the key to changing your body. Much just like Kirsten, Renee used to be overweight but after knowing how changing one’s diet was beneficial, she managed to develop a system to help others that shared the same predicament as she has literally walked through her client’s shoes.

Kirsten Vangsness’s weight loss was a three-year-long journey, and during this time, she managed to slim down from 200 pounds to 150 pounds. Even though there are numerous ways to slim without exercising like taking weight loss pills and weight loss surgery, Kirsten chose to go the natural and spiritual way through clean eating and being more active. Kirsten Vangsness’s weight loss is from eating a vegetarian lifestyle for over 20 years, and for her clean eating she refrained from eating meat, protein shakes, and chicken.

What Is Kirsten Vangsness Net Worth?

As a child, Kirsten started acting as her parents encouraged her to do so. She performed in various plays before she went on to land her first on-screen role in a commercial. During the early 2000s, her career resume included small roles in Phil of the Future, LAX and Annie Unleashed. All of this couldn’t compare to her role in 2005 when her life changed in the pilot episode of Criminal Minds as Penelope Garcia. Now, thanks to her that long starring role on Criminal Minds, she stands at an estimated net worth of $4 million!

Broom standing up: Hoax or Reality?

Krushna and Claudia to shake a leg on 'Confused Lover'