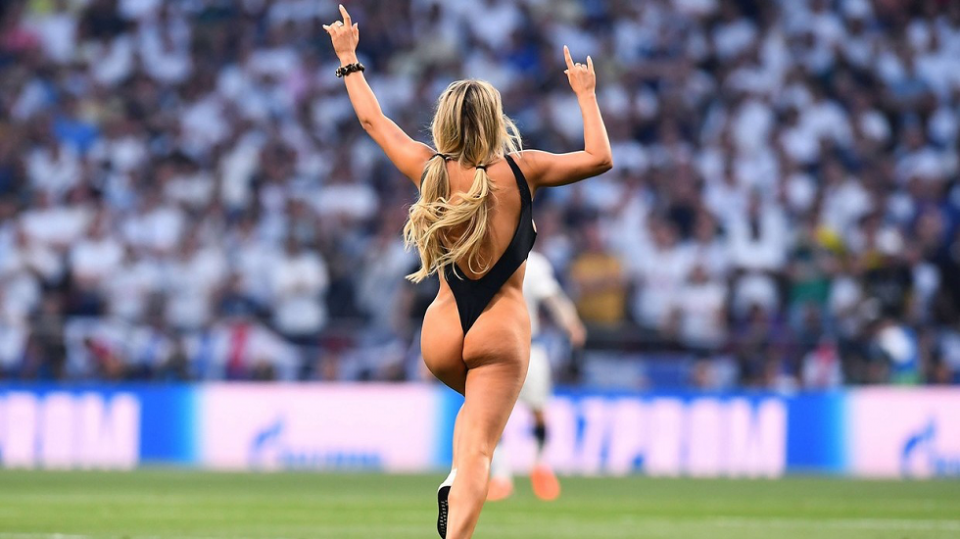 Kinsey Wolanski made headlines even before she was part of a content collective. In one of her most viral moments to date, she sprinted across the field at the Champions League Final soccer game in Spain in June 2019. In this article, we review how the bold move only catapulted her further into the spotlight. Here are also some other things that you need to know about the streaker extraordinaire:

Let’s start off with the most obvious. Kinsey Wolanski made a name for herself and for her brand – her body, especially her butt – when she sprinted onto the field during the UCL final in Madrid, Spain. This was in 2019.

Wolanski was taken off the pitch by security and arrested and, according to MARCA, was fined €15,000 for the stunt, €5,000 for trespassing and €10,000 for advertising. When the scantily clad Instagram model, Kinsey Wolanski, decided to run on the pitch mid match, her shirt read, “Vitaly Uncensored”, which was advertising, but despite the fine, Vitaly Uncensored ended up making a good investment with advertising during the final worth a reported $3.97 million.

After reading this, here are three takeaways: She is an Instagram model (big butts and the site go hand in hand), she’s obviously a prankster (more about this later) and she’s the girlfriend of the owner of Vitaly Uncensored (read below).

Who is Kinsey Wolanski dating?

She is dating a Russian-American “Youtube personality”: Vitaly Zdorovetskiy, who in a video posted her stunt on Twitter and seemed really thrilled with the whole thing. It’s not far-fetched to conclude that Zdorovetskiy, who has a rep as a prankster, was behind this.

“$3.97 million: Value, in equivalent advertising time as of 5:30pm ET, garnered by Vitaly Uncensored, an adult site featured on the clothing of streaking model Kinsey Wolanski, according to @ApexMGAnalytics. Wolansky is the girlfriend of YouTuber Vitaly Zdorovetskiy, who owns the site.”

Funnily enough, Zdorovetskiy himself is banned from stadiums all over Europe for similar shenanigans. It looks like she has found a perfect match in dating Vitaly Zdorovetskiy, as he apparently specializes in hard-R to X-rated pranks with nude models. His Youtube channel also named ‘ Vitaly Uncensored’ has more than 10 million subscribers.

The Consequences of Pitch Invasion:

She’s A Prankster And Adventurous:

Once banned from social media, Kinsey Wolanski’s Instagram page is now closely followed by 3.6 million fans. A quick scroll through Wolanski’s page will give fans a dose of her sultry swimsuit snaps, daily dips in the pool, and plenty of pranks… her specialty. She also boasts nearly 100,000 followers on her TikTok page.

The bold move of sprinting semi naked in Spain in June 2019 only catapulted her further into the spotlight. But even before that, she has always been someone who did adventurous things, like starting a modeling career, for example.

“I began modeling when I was approached while I was visiting L.A. I was very hesitant at first but fell in love and moved down there,” Wolanski told Maxim in January 2018 of how she got her start. In order to get started in modeling in the USA like Kinsey did, you’d need to go to a modelling agency.

There’s no shortage of thrilling content on Wolanski’s social media pages, and she’s definitely the daredevil indeed. Here is what Kinsey Wolanski told Maxim as part of their What A Girl Wants page on what her perfect date would include:

“My ideal date would be something adventurous,” she said. “I love anything active and something to create memories, rather than just dinner or a movie.” She loves elephants and enjoys swimming with sharks:

What Has Kinsey Wolanski Been Up To Recently?

Kinsey Wolanski streaked at Austrian skiing event holding a ‘RIP Kobe Bryant’ banner. She hit the headlines in January when she walked out in an almost there black bikini at the Ski World Cup in Austria as she paid tribute to basketball star Kobe Bryant. This time, she was smart and avoided wearing a branded swimsuit to avoid paying an exuberant fine.

She Joined The Newest TikTok House The Clubhouse:

The Clubhouse is a house formed by TikTok and Instagram stars Daisy Keech and Abby Rao. The house will act as a home to many creators, as well as a place for them to collaborate together on different projects, most likely for TikTok and YouTube, specifically.

Daisy is a TikTok star, fitness influencer, Instagram model, and YouTuber who boasts 3.4 million followers on Instagram. She is also a cofounder of both the Hype House and the Clubhouse. Daisy was previously in the famed Hype House, in fact, she was a cofounder, but she left the house recently over differences with another cofounder, Thomas Petrou.

The Clubhouse is in Beverly Hills, though we don’t know the actual address (and we probably never will). The house is absolutely gorgeous, though, so get ready to see it all over Instagram.

Aside from the cofounders Daisy and Abby, the other confirmed members of the house include Chase Keith and Kinsey Wolanski. Fitness influencer Mariana Morais and Instagram model Leslie Golden have also posted in their Instagram bios that they are members of the house. On top of that, other creators like Jay Laurent, Son Films, and Ryan Butler were featured in Daisy’s house tour video, though it’s unclear if they are official members.  There have also been rumors that some former Hype House members will be joining the Clubhouse, but so far nothing is announced.

She Ran Off To The Jungle…Almost

Champions League black swimsuit model Kinsey Wolanski recently stripped into a tiny bikini and vowed to ‘move to the jungle’ due to coronavirus. The 23-year-old has joked she’s moving to the jungle to leave the coronavirus crisis, insisting all she needs now is her very own Tarzan. She has now been stranded in the Bahamas for over 2 weeks and instead of posing alone, she teamed up with fellow model Abby Rao to show off double the curves.

One cheeky fan messaged: “Oh god absolutely stunning I’d have a crack at being your Tarzan.”

Stranded in the Bahamas On Luxury Holiday Due To Coronavirus, She Poses Naked:

Looks like the only thing that could ever stop this influencer from running around in off limit locations and arenas is the COVID. The bombshell 23-year-old model sent fans wild as she posed fully naked while sunbathing with clubhouse pal Demi Rose. The ladies are living large in the clubhouse (aka, a mansion), and Wolanski has documented her journey for fans along the way. Kinsey Wolanski and fellow model Rose left little to the imagination as they whipped their kit off and soaked up some sun rays. You can also learn to pose like these two, with a little bit of help.

The American swimsuit model does not know when she will be able to return home due to the coronavirus outbreak. But she has been keeping her 3.7million followers up to date with her day-to-day antics on the idyllic island. And now she has revealed her plans to return home to the US have been put on standby until further notice.

Wolanski posted a picture of herself in a plunging red swimsuit and a beach hat while sitting behind the wheel of a boat.

The caption read: “I apologise in advance for all the Bahamas photos but as of now we aren’t sure when we will be able to head home… making this tiny island home for now with my best friends.”

But most of her fans did not seem to be complaining that she was bombarding them with sexy beach selfies.

One follower commented: “There’s worse places to be stuck than the Bahamas, let’s be honest!”

One said: “It’s nice to see your beauty in the midst of this tough time, thanks for sharing.”

Another added: “Simply stunning as usual.”

You really don’t expect that the headlines following a Champions League will be dominated by the Instagram model Kinsey Wolanski running on the pitch mid-match, however it might just be the best way to prove that bizarre publicity always wins!