Many fans across India rejoiced 10th of August when their favorite actor cum politician Kamal Hassan’s movie Vishwaroopam got released after overcoming many legal and political issues.
The fans became so excited that in front of many cinema halls they were seen dancing and playing drum beats while the movie watchers gathered in front of ticket counters to get tickets to watch most awaited movie of 2018. After joining politics, Vishwaroopam is Hasan’s first movie. In southern parts of India, many fans were seen worshiping photo cut-outs of this 63-year aged actor by offering milk and flowers as a token of respect, just like they worship Lord Shiva.
Due to recent demise of a trouper Indian Politician Karunanidhi, fans remain relatively low prior movie release unlike other times when they go overboard with merriments before film’s release. 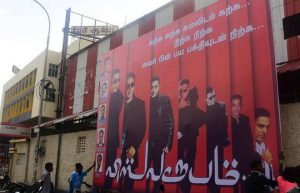 One of Kamal Hasan’s fan acclaimed, “We had plans to make it much grander than we did for Vishwaroopam. But considering the recent situation, we have decided to keep it low this time. But we still are supportive of him and have high expectations for the movie,”
This drama thriller movie also stars Andrea Jeremiah, Pooja Kumar, Shekhar Kapoor and Rahul Bose. The movie was directed, written and produced by Kamal himself and got shot in two different languages, Tamil and Hindi and is even going to be dubbed in Telegu.
The first part of the movie was released in 2013 which faced many hurdles before its release. Muslim community protested against the release of the film labelling the movie content as an ‘Anti-Muslim’.
Even this movie was marred with controversial suspects and the filmmakers had to face many financial disputes. But, the Madras High Court passed a favorable bill towards the movie on Thursday that paved way to Vishwaroopam’s release.
The movie highlight was soon shared over social media after its release. In the movie Kamal featured as a spy agent and the entire movie is said to have sequences of nail biting moments. Movie’s trailer in June already got many appreciations before its release and today, with its successful opening, Kamal once again proved to be an iconic actor.

Be One Step Ahead Of Stress- Part 2