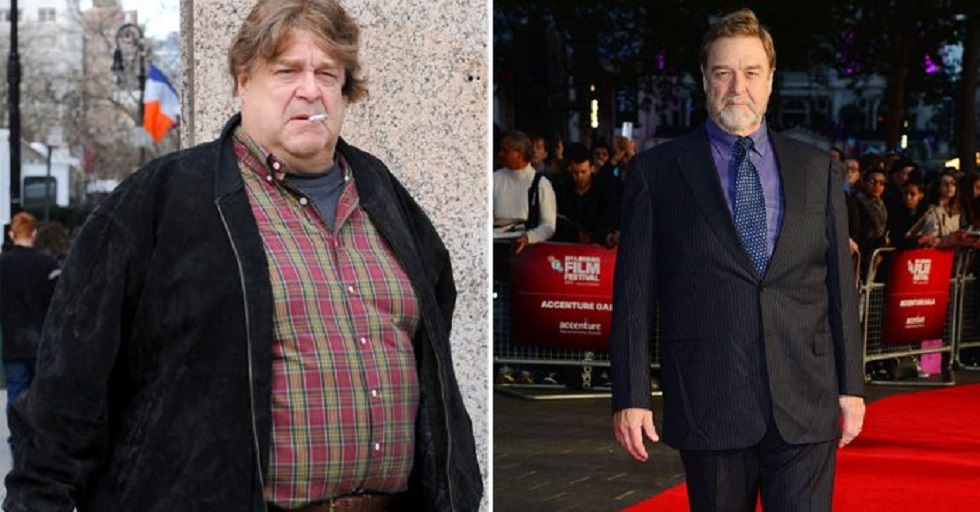 Putting on weight is the next common thing compared to cancer. This is a problem that not just makes people unfit but creates health issues in the long run. While many people who are overweight constantly try and fail to lose weight, some hardworking and determined ones become successful at losing the extra fat. Such people may not always be successful in the career but are surely an inspiration to the ones with whom they share their weight loss story. However, one successful celebrity has wooed the world with his unsteering determination; yes, we are talking about the Hollywood superstar, John Goodman. This American actor had put on so much weight that he weighed approximately 400 lbs. However, he decided to change that and lost sufficient weight to look significantly slimmer. What is John Goodman’s weight loss routine? Let us find out.

The 67-year old American actor, John Goodman, is a jolly old fellow who did not bother about gaining weight up to the age of 64. In an interview with ABC News, Goodman showed up suited but what was stunning about his appearance was that he had lost significant weight. When asked by the interviewer, Goodman revealed what inspired him to lose weight. A little more than two years ago, he realized that he did not like the way he looked. He could not appreciate the sight of himself while looking into the mirror. That is the time he knew that losing weight was inevitable.

Weight gain is not a problem John Goodman developed at the later stage in life. He always suffered from frequent weight gains that he had to control initially through crash diets. He controlled his diet and ate minimal and healthy food for three months approximately. After he had lost weight, he again started eating in plenty until he had to lose weight again. This was a tiring process and hampered him both physically and psychologically. He got bored and he left this process altogether. Thus, he started gaining weight and there was nothing to stop him then.

John Goodman knew that going back to this crash diet regime was not going to solve his problem. Especially at his age, he needed to make sure that he was strong and fit; and this would not be possible through a crash diet. Hence, John Goodman sought the help of specialists and followed a proper and healthy food chart. He ate adequately but much less than before. From constantly eating throughout the day to only eating small meals after intervals was definitely difficult for this American actor. However, he was determined and did not complain. He also started exercising so that his weight loss process is enhanced and he becomes better in terms of fitness. He wanted to prove to himself that he had the ability to regain his fit form. This was his motivation and he continued to stun the world with his slimmer look. Getting to know this inspirational weight-loss journey of this celebrity is wonderful. And, what is even more inspiring is getting to the journey of the famous American actor, John Goodman.

Born on 20 June 1952 in Missouri, John Stephen Goodman struggled his way up the ladder ever since his father, a postal service employee, died of a heart attack. This two-year-old Goodman and his siblings were left in the care of their mother, a waitress. Thus, he grew up in a modest family dreaming of doing wonders on his own. While studying in Affton High School, Goodman developed a knack for both football and drama. Gradually, he made up his mind to become a professional athlete and got into Southwest Missouri State University with a sports scholarship. This young gentleman was busy partying and enjoying his dreams of becoming a famous footballer. Unfortunately, he had to change his aspirations after a major injury that killed his dreams of becoming a professional footballer.

Following the injury, John Goodman changed his major subject to dramatics and went on to graduate with that specialization. Soon after graduating, he borrowed money from his brother and went off to New York to make a mark in the world of drama. At that time, he had to meet his expenses by working as a bartender or waiter and that was not sufficient. He then started trying out for voice-over roles and commercial ads that paid much more. This was a turning point in his career as these opportunities brought him a step closer towards becoming a famous actor someday.

In 1978, John Goodman was offered a role in “Loose Ends”. Though he tried his best, he could make a mark as an actor. Goodman did not lose hope. He kept trying for roles in the 1980s and he did land with some good ones. “Eddie Macon’s Run” in 1982 and “Face of Rage” in 1983 were the ones in which Goodman was capable of making a good impression as an actor. Since then, there was no looking back. Soon after, he was cast in “Roseanne” that changed his life and established him as a successful American actor and international celebrity. From being nominated to the Emmy Awards several times to winning the Golden Globe Award, John Goodman has won the hearts of the film fanatics and wooed the audience with his natural and realistic acting skills.

It is said that behind every man’s success, there is a woman. Would you like to know who that special woman was in the life of John Goodman? It is time to find out if you do not already know.

John Goodman was not only a skilled actor but also a loving husband. In the 1980s when Goodman was gradually stepping towards greater success, the time to let his heart experience love had arrived. It was in 1988 that he met the woman of his life, Annabeth Hartzog. The couple met in New Orleans when Goodman was working in the film, “Everybody’s All-American”. Their contemporaries say that this couple looked extremely cute during their days. The loving couple got married in 1989 and was blessed with a girl-child in 1990. Molly Evangeline, their daughter, received the love of a doting father and mother. Theirs was truly a happy family.

John Goodman was a good man. He has not walked down the red carpet with six-pack abs and a muscular body, but he has walked down the red carpet as a genuinely talented actor. From struggling to get TV commercials to grabbing major roles in television and movies, John Goodman has aced his journey as an actor. Thus, it was evident that this determined actor would not step back from accepting what needs to be changed. He embraced the fact that he needs to shed extra fat and John Goodman’s weight loss regime has turned out to be an inspiration. He has surely proven once again that the willingness to change is not difficult to achieve. Today, this actor has given moral support to thousands of people who are overweight and want to look slimmer. John Goodman has set an example that a man who used to weigh 400 lbs can strive to lose more than 100 lbs. Thus, Goodman is a hero in both reel life and real life.

Adele: Everything To Know About The Fifteen Time Grammy Winner