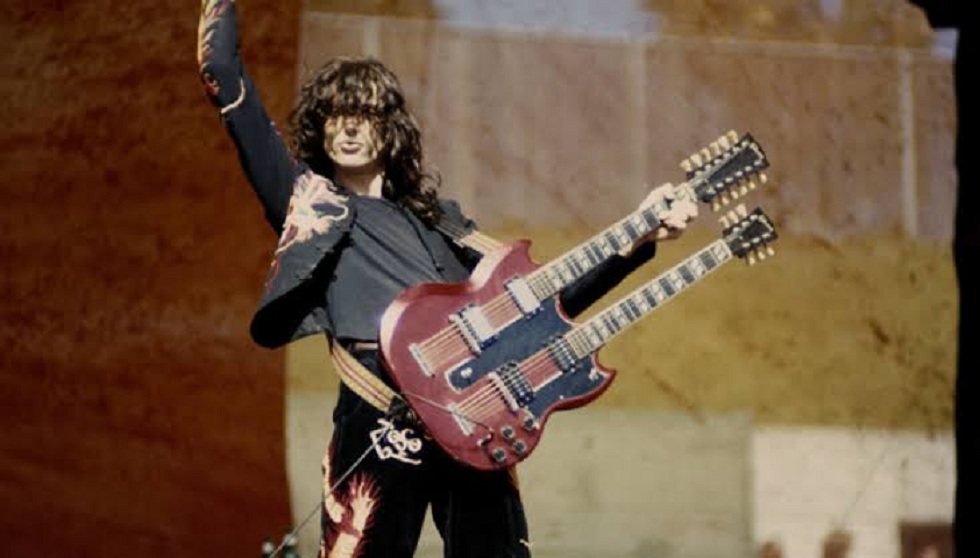 Through his work with the Yardbirds, Led Zeppelin and others, Jimmy Page has arguably influenced and inspired more guitarists than any living player. In a late eighties article in a guitar magazine, Carlos Santana said of all the musicians he heard after Hendrix, Jimmy Page was the greatest to him. He said that very few musicians build musical “mansions” like Jimmy Page.

Page builds with guitar and sound orchestration. This is more than just recording a lot of guitars; sounds are placed in the mix to achieve a transforming experience. Use a decent set of headphones and listen to Led Zeppelin’s “Ten Years Gone”, “Achilles Last Stand” or “Stairway to Heaven” and you will hear Jimmy innovate using mic placement, Leslie speakers, sound panning and differing guitar tones. He shapes and sculpts the sound with multiple approaches and in the end makes the song into a “mansion” that is both elaborate and colourful. In comparison, others build cookie cutter small.

Jimmy Page interned in sound craft while he worked as a session guitarist in London. Studio experience allowed him to observe and master the science of mic placement and other techniques. Throughout his career, Jimmy has always sought new guitar tones and earlier on was involved in the creation of one of the first distortion pedals used for electric guitar with British engineer Roger Mayer. His knack for finding quality sounds and recording the guitar is praised by greats such as Eddie Van Halen. In fact, Eddie says:

“He’s a genius… He’s a great player, a songwriter, a producer… When you hear a Page solo, he speaks”.

The glowing testimonials towards Jimmy Page from other guitar legends are endless, however, one of the easiest ways to appreciate his greatness, is to listen to tracks like this:

While listening to Jimmy Page’s solos and improvisations, we can often hear a plethora of influences ranging from folk to blues to rockabilly. The fact that he has listened to and studied a wide variety of music is quite evident by the size of vocabulary. It’s more than lead guitar; he has unique finger-styling and plays elegantly on the acoustic guitar as well. His approach towards rhythm guitar playing has had a widespread influence on entire genres, from goth to metal to punk. This incredible and unmatched versatility on the instrument is found throughout the Zeppelin catalogue and other projects.

Despite the numerous people who talk about Led Zeppelin’s alleged plagiarizing, most of the song riffs recorded by Zeppelin are either written by Jimmy Page or bassist John Paul Jones. While the descending bass riff of Dazed and Confused is clearly not original, most other riffs are totally unique and original. Lyrical content however, has been a constant thorn in Led Zeppelin’s side. Most of the ‘plagiarism’ claims are filed against their lyrics. Usually, it was a brand new musical piece which had old blues-y, folk-y lyrics. Some great examples of that scenario are monster tracks such as In My Time of Dying, When the Levee Breaks, How Many More Times and Nobody’s Fault But Mine. These songs featured absolutely brand new music but utilized previously used lyrics from older blues and folk songs.

Since the majority of Led Zeppelin’s lyrics were penned by lead singer Robert Plant, the lyrical plagiarism can be attributed to him. Robert Plant had a heavy blues and folk influence and he continues to quote classic blues and folk phrases while improvising his vocal lines live.  This is a trait which is common among many blues singers. However, in the joyful vigour of youth, a young Robert Plant over-did it at times. One of the most infamous examples of that is Plant quoting lines from Willie Dixon’s You Need Love while singing the Led Zeppelin monster track Whole Lotta Love.

And here’s Stairway to Heaven:

The ‘minor key slash chords descending progression’ is not unique to Spirit’s Taurus. Both the songs resolve very differently from each other as the progression nears its end. John Lennon’s I’m Losing You , Davy Graham’s Cry Me a River and the jazz classic My Funny Valentine also sound somewhat similar. This kind of descending progression is extremely common in music and these tracks definitely sound similar, but they are not the same.

Here’s Jimmy Page talking about how Stairway to Heaven was written:

Ultimately, from Kashmir to Over the Hills and Faraway to The Rain Song, the best Led Zeppelin songs are their own. Legendary bassist and frontman of KISS, Gene Simmons said this about Jimmy Page:

“Jimmy who happened to be in New York on business and was ever the gentleman, came over to say hello. The man who single-handedly came up with more classic riffs than all the other bands combined. The Riff Meister of them all”.

Jimmy Page has also been criticized for being ‘sloppy’ while playing live. A lot of times, the perceived sloppiness is him adding flairs and accents to the studio versions of the track. However, he definitely isn’t as tight and technically proficient on stage as a young Yngwie Malmsteen. However, comparing those two is like comparing apples to oranges. Their style and habits make them unique. During the heydays of jazz, many saxophone players practised far more than Lester Young and were more dexterous on their instrument. However, Young was the one who was given the nickname of ‘Prez’ and influenced more saxophone players than most. Similarly, Jimmy Page, despite his technical shortcomings, is a highly influential guitarist. Here is what guitar virtuoso Steve Vai said about Jimmy Page in 2014:

“In the physical universe there are objects that include suns, planets, all life in matter, in all dimensions; and then there is the space that all these things exist. That space is the vital element. For virtually every kid since 1968, who picked up a guitar to find his voice on the instrument, Jimmy Page has been that space that enables all our notes to be played.“

As might have heard in the No Quarter clip, Page could play fast but it’s not just how fast you play or technically clean, it’s about how well you can express and make music. His solos – from Sea of Love to Stairway, from Heartbreaker to I’m Gonna Crawl – are memorable and express a wide range of emotive – you hear everything from laughter to crying to explosive outrage. This imaginative style is instantly recognizable.

How good was Jimmy Page at improvisation?

Jimmy Page was a master of improvisation. Most of live performances featured incredibly new and original pieces which were absent on the studio recordings. Modern ultra-technical players play things the same way each time. A guitarist like Jimmy Page would find this approach quite boring. He was more interested in creating something new while soloing and something that reflects the moment in terms of emotion. Improvisation is an “as is” creative art and Page was always willing to take risks. This may result in slightly mistake prone ‘sloppy’ playing, but it will also give more of an original imprint to the musical piece.

Jimmy Page took the same approach in the studio. Some things (like the solo in Whole Lotta Love) were worked out in advance but for the most part, Page improvised. He recorded two or three solos and chose one that he liked best. Sterile, robotic playing wasn’t something Jimmy Page was interested in.

While technical abilities are really important, playing music isn’t merely an exercise. Music should stir up emotions aside from a sense of amazement at the dexterity of the musician. While guitarists such as Joe Satriani, Paul Gilbert, John Petrucci and Steve Vai combine technicality with musicality perfectly, a lot of ‘guitar shredders’ end up trading musicality for technicality. Led Zeppelin never made that compromise and wrote incredible songs.

Listeners have played Led Zeppelin records for over half a century now and their work seems destined for immortality. Jimmy Page’s guitar playing is a crucial aspect behind such unwavering fandom. All of Led Zeppelin’s albums captured a lot of raw emotion and Page’s guitar layering enhanced the feel, rather than drowning it out.

Compared to the extremely sterile and clean sound of modern day popular music, the sound of Led Zeppelin seems like a far cry. It wasn’t meant to just rule the charts for a few weeks, it was meant to have character and feel that can help make the music instantly recognizable and immortal. Modern day popular music is produced in a very slick manner, but it lacks character. It’s also very formulaic and predictable. The invasive presence of technology also makes the music sound very different from the artist’s actual ability. Not to say that Led Zeppelin made music for charity and didn’t care about money. However, modern day popular music has become so money driven that the biggest hits all end up sounding the same. This trend is true across all popular genres of music.

Iggy Pop calls it the “we need to clean-up our sound for world success disease” and it is has been around for sometime. But today it has been brought to an extreme. If present day radio-friendly pop were architecture you might picture a cold and uniformly glass-box world.

How influential was Jimmy Page?

Sterile, slickly produced songs are somewhat opposite to the whole point of music. The quest for sounding as perfect as possible results in music that is bereft of any character and soul. These soulless tunes might rule the airwaves for some time, and garner billions of views on Youtube, but they lack staying power and will be replaced by the next popular track. The spotlessness of such tracks is only outdone by their bland, vanilla nature.

Perhaps if he wanted, Jimmy Page could have been more spotless in his approach. His successful stint as a session musician in the sixties is a testament to his professionalism and self-discipline.  His solid rhythm playing and memorable soloing were high in demand for the pop of the sixties but for him, it never was about yearning for sanitized perfection. He chose feel and raw emotion over blinding technique in his guitar playing. Since music is considered the voice of the soul, Jimmy Page’s approach produces more memorable and universally beloved pieces of music.

“Jimmy Page is just a brilliant player, truly brilliant. He’s one of the few guys that really blazed away on the guitar and yet he still has something important to say with it. Their music was about soul, feeling, technique & skill and he blended that all together. There’s only a few guys I know who have done that.”

Jimmy Page, despite not being a technical wizard, is definitely a guitar hero. His work has influenced thousands of guitarists over the course of time. Jimmy Page wasn’t just a guitarist, he was also an expert multi-instrumentalist (similar to his band-mate John Paul Jones). He was also a flamboyant live performer who even used a violin bow to play his guitar during a show. He made the dual neck guitar very popular in the rock music circle once again. No amount of words can do justice to the talent and abilities of Jimmy Page. Every time you listen to a Led Zeppelin track, you can hear something new and previously unheard of. So keep listening. To conclude this post, here’s the incredible story of Jimmy Page’s legendary Fender Telecaster: