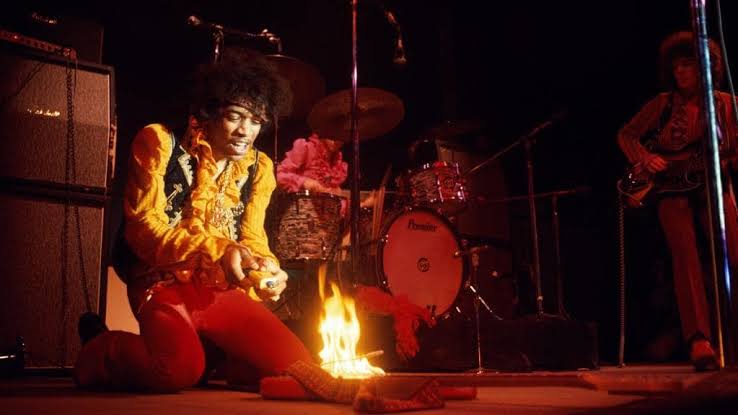 Calling Jimi Hendrix a guitar legend would be an understatement. Perhaps no other guitarist has changed the way we view the instrument in the way Jimi Hendrix has. Before Jimi Hendrix, the electric guitar was still struggling to find its footing in the burgeoning world of rock n’ roll. After Jimi Hendrix, the electric guitar became synonymous with the genre itself, dominating popular music for more than 20 years. Between his virtuosic playing talents, his willingness to push the technical limits of the instrument to the extreme and his ability to write songs which used the instrument in hitherto unknown ways, Jimi Hendrix was a complete package. In this post, we will take a closer look at the greatness of Jimi Hendrix, and find out why after more than 50 years of his death, he is still considered to be the greatest guitarist of all time by most people.

Why is Jimi Hendrix considered the best guitarist?

Before you read anything else, listen to this:

What you just heard, is Purple Haze. For a lot of people on this planet, this was their introduction to Jimi Hendrix. It was the opening track to the North American version of The Jimi Hendrix Experience’s debut album, Are You Experienced.

The UK and International edition of that album featured a different cover and kicked off with Foxey Lady.

Regardless of which version you got your hands on and which one of those legendary tracks was your intro to Jimi Hendrix, it was a good sign of things to come. Both tracks featured the iconic guitar sound of Jimi Hendrix, wailing with volume and oozing with personality. However, from a technical aspect, the most interesting aspect of these songs, is the chord phrasing of Jimi Hendrix. Both of these songs have passages built around a specific kind of chord. The dominant 7#9 chord, known colloquially today as the ‘Hendrix Chord’.

What is the Hendrix Chord?

While Jimi Hendrix wasn’t the first musician to use this chord, he definitely was the first one to make it iconic. If you are wondering what makes the Hendrix Chord so special, it is chiefly the tension between the major and minor thirds. A lot of Western music is built around stacking of major and minor thirds. A major third is an interval which spans four semi-tones (or four half steps). So the major third of an E, would be a G#. A minor third on the other hand, spans three semi-tones (or three half steps). So the minor third of an E, would be a G. With that in mind, let’s take a look at the Hendrix Chord in E. If you look at the chord in the image above, you will see a major third clustered in the middle. But the note way up high, is a G, which happens to be the minor third of the root note E. So, the Hendrix Chord consists of both minor and major third. If these two notes were beside each other, it wouldn’t sound right. However, as those notes are spread out, they give the chord just the right level of dissonance, to throw your ear out, and sound abnormal. You can hear the incredible dissonance on both Purple Haze and Foxey Lady.

Obviously, the Hendrix Chord wasn’t the only thing that made Jimi Hendrix a great guitarist. It is just one of the many innovative and path-breaking things that he did, separating himself from other guitarists. Jimi Hendrix wasn’t happy in settling for the easy option. Instead, Hendrix searched for ideas that subverted the expectations of the average listener. One of the ways that Jimi Hendrix achieved that, was by utilizing bends.

How did Jimi Hendrix use bends?

Bends are a technique wherein a guitarist pushes a string away from its usual track, bending to change the note. Similarly to the Hendrix Chord, bends weren’t invented or first used by Jimi Hendrix. However, nobody used them in the way that Jimi Hendrix did. Instead of using bends as merely accents, Jimi Hendrix worked them into the melodies of his soloing. He would use subtle bends to tweak notes, but also wild, intense bends that would create a bluesy dissonance in his solos. The song Red House is a perfect example of this:

Set in a traditional Blues structure, the opening solo by Hendrix features a number of bends of different speeds and interludes. As we move to The Jimi Hendrix Experience’s second album, Axis: Bold As Love, the bending trend continued in his solos.

Jimi Hendrix wasn’t just satisfied with playing chords alongside the bass and drums. He added dozens of little embellishments. These embellishments gave his music some kind of driving momentum, ensuring that there was always something neat and complex going on beneath the surface. To create these flares and embellishments, Jimi Hendrix would often break up his chords into smaller pieces. He would play a part of a chord and let it ring out, while embellishing a small melody on the rest of the chord above. The best example of this technique is the monster track Little Wing, a true feat in guitar playing.

The melodic theme drives the intro, but throughout the entire verse, you can clearly hear Jimi Hendrix continuing to lay down a number of different ideas in the background. He mixes trills and chords and puts dozens of tiny motions in each phrase, filling the song with tiny little intricacies. One of the reasons why Hendrix was able to add embellishments so well, was because of how he used his thumb.

How did Jimi Hendrix use his thumb?

Traditionally, guitarists are not supposed to use their thumbs on the fretboard but Jimi Hendrix would reach around his guitar and fret his lowest string with his thumb. This allowed him to generate a bass note while creating flourishes up top. While enough praises can’t be sung about the techniques of Jimi Hendrix, he possessed another kind of mastery of the instrument as well.

How did Jimi Hendrix use his guitar?

Hendrix understood the electric guitar as a piece of technology in a way that few others in his day did. By pairing his guitar with intense overdrive distortion, Jimi Hendrix was able to create a completely novel sound the day. He was quick to adopt the guitar technologies of the day, such as the whammy bar and the ‘wah’ pedal. His use of the wah pedal on the track Voodoo Child from his third album Electric Ladyland, is responsible for one of the most iconic riffs of all time. And one that really helped people’s views on what these pedals could accomplish.

Perhaps the most amazing thing about this aspect of Jimi Hendrix was the way he used these effects live. It wasn’t just all studio mastery. Check out this incredible performance of The Star Spangled Banner where he used feedback and the whammy bar to create divebombs and explosions.

By doing this, Jimi Hendrix managed to make an instrumental passage speak volumes in the way that words could never do. He used the guitar to imitate weapons in his anti-war track, Machine Gun. His use of feedback, loud distortion and rapid muting in that song created the chaotic atmosphere of war.

Jimi Hendrix’ Magnum Opus: All Along the Watchtower

Everything that made Jimi Hendrix great, came together in one of his most iconic songs, All Along The Watchtower. In a remarkable feat of creative thinking, Hendrix took an original Bob Dylan song that sounded like this:

and turned it into a hard rock/proto-heavy metal monster which sounded like this:

Even this cover song alone, showed Jimi Hendrix’ ability to think outside the box and push the boundaries of rock guitar playing. The rest of the song is filled with highlights which showcased his seemingly endless abilities as a great guitarist. In the verses, Hendrix layered his famous flourishes behind evocative chord progressions. After the first verse, he teased the listener with a short solo section, dancing around the guitar neck with runs and bends. The song featured three different guitar solos, each of which showed off different aspects of Jimi Hendrix’ ability to warp tone as per his wish. In the middle section, he used a lighter as a slide to create a specific sound, before launching into a wah heavy phrase. The middle solo is one of the most iconic solos ever. It presente itself as a melodic symphony, linking over half a dozen ideas together. Even in the outro, Jimi Hendrix continued to change his solos, pushing for one final climactic explosion.

Jimi Hendrix wasn’t just a guitar hero, he was a guitar titan. He changed the way the world perceived and used the guitar, and in the process, changed music history forever. Essentially, this post just scratched the surface of what makes him great. There is only one true way to enjoy this man’s genius, just listen, listen and listen!