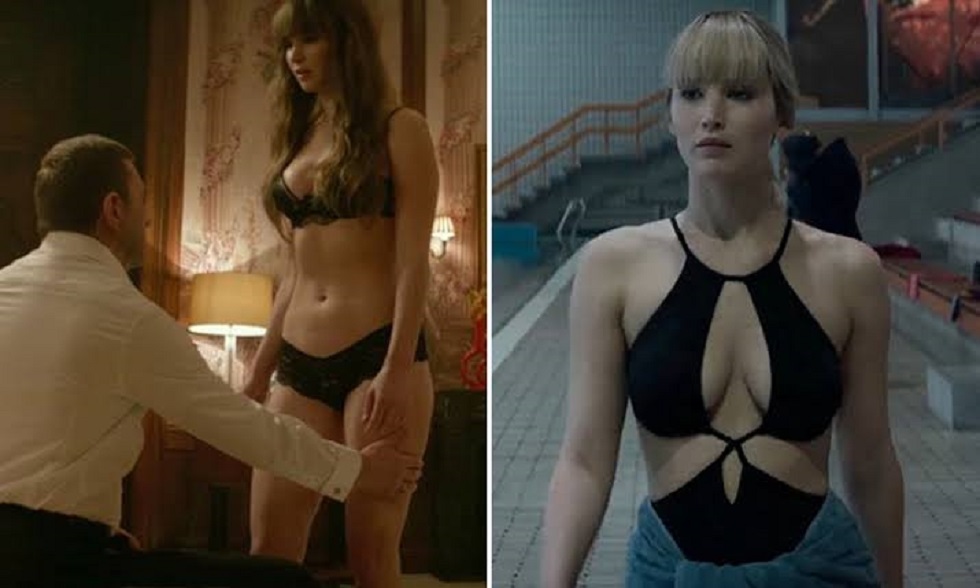 Jennifer Lawrence is one of the biggest modern day Hollywood stars. Not only is she well known for her stellar acting chops, she is also famous for her looks and her relatable image with the fans (a trait parodied by Ariana Grande’s impersonation on Saturday Night Live). Jennifer Lawrence has starred in Hollywood blockbuster franchises such as the X Men and The Hunger Games. Aside from being a major box office draw, she is also a critically acclaimed actress. She won an Academy Award in the Best Actress category in 2013 for her incredible performance in Silver Linings Playbook.

However, in 2014, Jennifer Lawrence, who was 27 at that time, was caught up in the devastating 4chan hacking scandal, resulting in her name being splashed across media headlines and everyone on the Internet discussing about her nakes body.

In the months that followed the incident, the star denounced the hack as a ‘sex crime’ and a ‘flagrant violation of privacy’.

A man who deliberately hacked into Jennifer Lawrence’s private iCloud and leaked intimate pictures of her naked body has been jailed for his part in the 2014 scandal.

George Garofano, 26, has been handed an eight-month prison sentence followed by three years of supervised release for breaking into 240 people’s Apple accounts, including J-Law and other Hollywood stars like Kate Upton, Amber Heard, Gabrielle Union and Kirsten Dunst.

Garofano, at the time a college student, pleaded guilty in April 2018 to hacking into the iCloud accounts by sending phising emails to his victims while posing as an Apple security expert.

When the unsuspecting victims handed over their usernames and passwords, Garofano broke into their accounts and took what he wanted.

The court heard how he had stolen the intimate images to trade with other hackers and may have sold some to supplement his income.

Thousands of naked images and sex tapes flooded the internet after the widescale hacking, and many were circulated on social media and sites like 4Chan in what was dubbed ‘The Fappening’ (it eventually went on to become a fully fledged site with an archive of leaked celebrity photos).

Garofano’s legal team argued he had “cleaned up his act” in the four years since and asked for a more lenient prison sentence of just five months, claiming he had “already suffered” serious consequences of his actions.

However, the prosecution countered the defence with this statement: “Mr Garofano’s offence was a serious one. He illegally hacked into his victims’ online accounts, invaded their privacy, and stole their personal information, including private and intimate photos.

“He did not engage in this conduct on just one occasion. He engaged in this conduct 240 times over the course of 18 months. Not only did Mr Garofano keep for himself the photographs he stole, he disseminated them to other individuals. He may have also sold them to others to earn ‘extra income’.”

The prosecution went on to add: “In committing this offence, Mr Garofano acted in complete and utter disregard for the impact on his victims’ lives.”

Three other hackers have also been jailed for their part in the iCloud scandal – Emilio Herrera, Ryan Collins and Edward Majerczyk – with prison terms ranging between nine and 18 months.

While the leak was unravelling, Jennifer Lawrence was emotionally shaken. In her own words, she felt like she was “gang-banged”.

Speaking to the Hollywood Reporter about her nude photo leak, Jennifer Lawrence said;

“When the hacking thing happened, it was so unbelievably violating that you can’t even put it into words.”

Lawrence went on to add: “I feel like I got gang-banged by the f**king planet — like, there’s not one person in the world that is not capable of seeing these intimate photos of me. You can just be at a barbecue and somebody can just pull them up on their phone.”

Jennifer Lawrence had originally shared her nude pictures with her X Men co-star and boyfriend at the time, Nicholas Hoult. Unfortunately, they were stolen from her iCloud account and splashed across the internet.

According to Lawrence, she was “still processing” that incident and had an emotionally moving incident after the leak of her nude pictures.

“I think, like, a year and a half ago, somebody said something to me about how I was ‘a good role model for girls’, and I had to go into the bathroom and sob because I felt like an imposter,” she said.

“I felt like, ‘I can’t believe somebody still feels that way after what happened.’ It’s so many different things to process when you’ve been violated like that.”

According to Lawrence, she still feels the effects of being exposed in the flesh, without her consent, to the world. The gross invasion of privacy still haunts her at times.

Here are some of the things Jennifer Lawrence has said about her nude photo leak:

The Hunger Games star revealed that several women had contacted her about bringing a lawsuit against technology company Apple which later revealed hackers hadn’t penetrated its systems, as was widely believed, rather targeted ‘names, passwords and security questions’.

I think that I am still actually processing

Despite the leak, the star decided not to sue the tech giant.

Speaking on the much maligned Harvey Weinstein sexual assault and harassment scandal, Jennifer Lawrence described the film producer as a ‘paternal’ figure in her career.

Lawrence said: “Then with Harvey Weinstein, it was bizarre. I heard that he was a dog but he was always almost paternal to me.”

‘He was never inappropriate with me. I thought we had a nice relationship where when he acted like an asshole, I called him an asshole. I actually think the word I used was a sadistic monster, but it was just never of that nature so that was really shocking”, Lawrence added.

While several A-listers including the likes of Rose McGowan, Gwyneth Paltrow, Natalie Portman and Angelina Jolie have spoken up about the sexual misconduct they’ve endured during their careers, the Californian star admitted: ‘I have never had a man use his power to sexually abuse me.’

In December 2017, The Hollywood Reporter releases an interview that Jennifer Lawrence did with Oprah Winfrey. According to Lawrence, the leak of her nude photos led to her becoming ‘afraid’ of doing nude scenes in a movie.

‘I just thought, “I’ll never do that again. I’ll never share that part of myself ever since it got shared against my will”,’ Lawrence told Winfrey.

The Passengers actress added that she would rather have been burgled than having photos of her nude body shared online.

‘I would much prefer my whole house to have been invaded,’ Lawrence admitted.

‘That’s what’s so scary about electronic (things). I have such fear with my phone and my computer and electronics.

‘It was violating on a sexual level.’

Speaking to Vanity Fair magazine, Jennifer Lawrence admitted that she ‘works very hard’ to maintain her privacy. The X Men star said that she likes to stay away from spotlight and admitted to being “really rude” to anyone who snaps her photo at a dinner. She said that she did that in order to dissuade others from doing so.

Jennifer Lawrence said: “You might think you know me, but when you approach me you’re a total stranger to me and I’m scared. [I get] very protective of my space. It took me a long time to be able to do that.

“If I’m eating dinner and somebody comes up and a flash goes off from someone’s iPhone camera, I am really rude to that person. Then other people at the restaurant will see and be like, ‘Oh, damn, I don’t want to do that.’ Privacy is a full-time job and I work very hard at it.”

According to Lawrence, she has 10 photographers “sleeping outside her house” at any given time.

Lawrence said: “I am so booked up for the next few years that there is no time. I took advantage of some time off after ‘Hunger Games’ and tried to go on vacation with some of my girlfriends but then we found out a disgusting paparazzo had been following us with a long lens the whole time, so that ruined it and we had to leave after two days.

“There are 10 men sleeping outside my house and I see them every morning and it’s not lovely. I’ve talked about it a lot with other actors who have the same problems but we don’t really like to complain about it because if we do people go, ‘Shut up, millionaires.’ and say, ‘You’re so lucky.’

And yes we are lucky but I deserve the right to have control over my image. I would prefer that the only time somebody sees me is when I am in a film, or in character or if I am promoting a movie.”

Jennifer Lawrence goes nude on camera for the first time

After initially being traumatized into being hesitant about doing nude scenes in a movie because of her nude photo leak, Jennifer Lawrence appeared nude in the 2018 spy flick, Red Sparrow. Lawrence played a Russian ballerina-turned assassin in the movie. This was the first time Lawrence had appeared nude on screen and she said that the initial thoughts “scared the hell out of her”.

Speaking to Vanity Fair, Jennifer Lawrence said: “I tried to do the movie without nudity but realised it just wouldn’t be right to put the character through something that I, myself, am not willing to go through. “

My biggest fear was that people would say, “Oh, how can you complain about the hack if you’re going to get nude anyway?”’ Lawrence went on to add.

According to Lawrence, going nude was entirely her decision and not someone else’s. She said: ‘I got something back that was taken from me, and it also felt normal.”

Jennifer Lawrence also stated that working with Francis Lawrence, the movie’s director (who also helmed the Hunger Games franchise) helped her feel at ease on set during some of the more uncomfortable moments while nude on the set of the spy film.

When asked about her experience during the nude scene in Red Sparrow, Jennifer Lawrence told Vanity Fair: “He looked me right in the eyes like I had clothes on and then all of a sudden I was like, “Oh, okay it’s just like I have clothes on”. ‘Everybody here is professional. You’re still at work. One look just made me comfortable. It didn’t make me feel naked.”

Symbicort: What is it, Risks and Side Effects