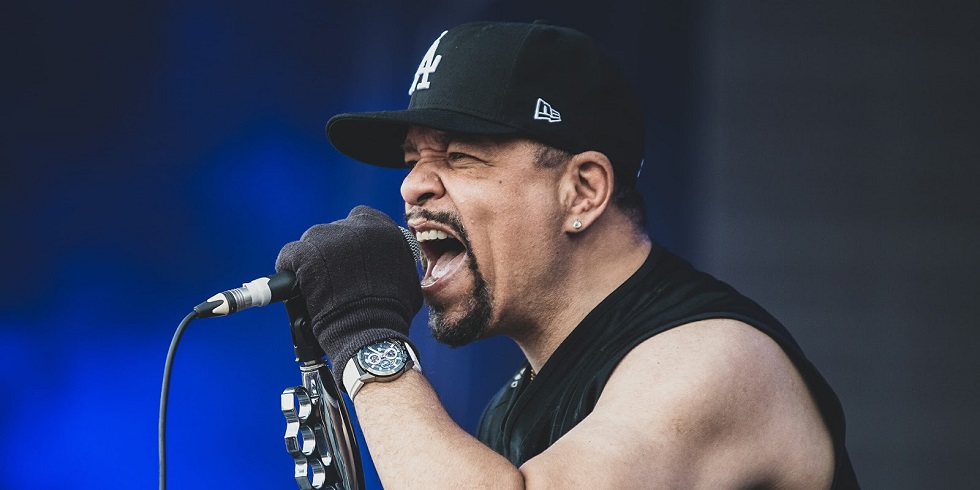 Tracy Lauren Marrow, better known as Ice T is a famous American musician, rapper, songwriter, actor, record producer, and author. Ice T hails from Newark, New Jersey, USA. Ice T began his career in the 80s as an underground rapper, making several demo tapes and mixtapes. He was signed by Sire Records to record an album in 1987. He released his debut album Rhyme Pays with Sire Records. At that time, Rhyme Pays was only the second hip-hop album to carry the infamous “Parental Advisory, Explicit Content” label. Sick Rick’s La Di Da Di was the first. Soon after releasing his debut, Ice T founded his own recording label Rhyme $yndicate Records. Through his own label, he released his follow up album, Power. That album went on to achieve Platinum status. Ice T is one of the very few hip hop artists who have also been a part of a successful heavy metal band. Ice-T founded his heavy metal band Body Count in 1991. He introduced his band to the world via his 1991 hip hop album O:G: Original Gangster. That album carried a track called Body Count. Ice T and Body Count released their self titled debut album in 1992. It contained the highly controversial track, Cop Killer. The song was criticized for urging people to kill members of law enforcement. Sire Records and their parent company, Warner Music Group, defended the track from the criticism. However, Ice T chose to eventually drop the track from the album as he felt that the controversy had begun eclipsing the music itself. Ice T has had a very successful hip hop and heavy metal career. He has also had a very successful acting career and he has (ironically) played a police officer Odafin Tutuola on Law and Order: Special Victims Unit since the year 2000. Ice T’s net worth as of 2020 is around $40 million dollars.

What is Ice T’s real name?

Ice T’s real name is Tracy Lauren Marrow. In an interview with Loudwire, Ice T said that his middle name of Lauren is authentic and not made up to appeal to a certain audience like the famous designer Ralph Lauren.

When was Ice T born?

Ice-T was born on the 16th of February, 1958, in Newark, New Jersey. His father’s name was Solomon Marrow and his mother’s name was Alice Marrow. Ice T’s father worked as a conveyor belt mechanic at the Rapistan Conveyor Company. Ice-T’s mother Alice Marrow was a very light skinned black woman who hailed from New Orleans. Her lighter complexion was a result of her Creole ancestry where she had some French roots, along with her African heritage. Because of the colour of her skin, Ice-T’s mother was able to hang around white people who would assume that she was white and openly express their racist thoughts against black people in front of her. Ice-T’s father was of a darker black complexion and because of that, they were considered a mixed race couple, even when they were not mixed.

Ice-T talked about experiencing racism for the first time as a child. He was going to his white friend’s house and another black friend of his wanted to come along. Ice-T’s white friend then said that his parents wouldn’t allow him to bring so many people over. However, on the way, Ice-T’s friend picked up quite a few of his white friends. When Ice-t asked him why he did that, his white friend said that his parents wouldn’t have allowed such a black looking boy into their house. When he narrated the incident to his mother, she said “Honey, people are stupid.” that incident taught Ice-T how to not let other people’s negativity affect his own life. Ice-T’s mother died of a heart attack when Ice-T was in the third grade. His father raised him with the help of a nanny for a few years. When Ice-T was 13, his father also died of a heart attack, orphaning him in the process.

After his parents’ death, Ice T went to live with his aunt and her husband. Over there, he shared a room with his cousin Earl. His cousin listened to a lot of Rock music. Ice T was also introduced to that kind of music because of his cousin. As a result of that, Ice-T developed a keen interest in heavy metal music.

Where did Ice-T study?

When he was in the eighth grade, Ice T moved to Los Angeles. Over there he initially attended Palms Junior High, a white majority school. Soon after that, he transferred to Crenshaw High School, a black majority school. While in school, Ice T stood out because he didn’t drink, smoke or do drugs. However, at that point of time, gangs of Los Angeles became very prevalent in the Los Angeles school system. Both Crips and Bloods, the most powerful all black gangs of Los Angeles, had their members or affiliates in schools. Ice T never joined any gang but he was affiliated to the Crips. As a result of that, he had to follow certain rules such as never wearing any red item of clothing and wearing blue most of the time.

How did Ice T get his nickname?

Ice T started reading novels by Iceberg Slim while he was in high school. He would always quote certain excerpts from it to his friends. His friends used to like it and always tell him “Yo, kick some more of that by Ice, T.”  That resulted in his famous nickname of Ice T.

In 1979, Ice T joined the U.S Army as the money he got from selling cannabis and stolen car stereos were not enough to support his girlfriend and daughter. He served in the Army for four years. It was during his time in the army that Ice T became interested in hip hop music. He was inspired by The Sugar Hill Gang’s Rapper’s Delight and he tried to lay down his lyrics over pre recorded instrumental tracks. However, his lyrics and style of vocal delivery didn’t go well with the music. Ice T was honorably discharged from the army because he was a single father. After leaving the army, Ice T didn’t want to pursue a gang banger lifestyle and decided to become a disc jockey. However, that didn’t last very long and he ganged up with his high school friends and started robbing jewellery stores. Ice T was hospitalized after a car accident and registered as John DOe in the hospital as he did not carry any ID proof with himself (mainly because of his nefarious criminal activities). After being discharged from the hospital, Ice T left the world of crime for good and fully dedicated himself to make a career in music. A couple of weeks after being released from the hospital, Ice T won an Open Mic competition which was judged by legendary rapper Kurtis Blow.

By 1983, he had adopted the name Ice-T in honor of Iceberg Slim and recorded a rap called, The Coldest Rap, over a funky Jimmy Jam-Terry Lewis backing track on the independent label Saturn.

After honing his craft by creating music for videos and releasing recordings, he signed with Sire Records in 1987 and released ‘Rhyme Pays’, his debut album, which eventually went gold.

Ice T also recorded the theme song for the movie Colors. It was made by famous actor and director Dennis Hopper and it revolved around the inner city gang banger lifestyle of Los Angeles.

In 1991, Ice T formed his heavy metal band Body Count. As per Ice T, the main reason behind forming the band was to create an outlet for his high school friend Ernie C to keep playing guitar. The three metal bands that were his biggest inspirations were Black Sabbath, Suicidal Tendencies and Slayer. He looked up to Black Sabbath for the doom in their sound. He looked up to Suicidal Tendencies for their punk rock attitude and the presence of a gang banger lifestyle in the music and lyrics. And lastly, he looked up to Slayer for their precision and aggression. As per Ice T, Slayer has been, and always will be one of his favourite groups of all time.

Ice T’s debut album with his band, Body Count, had the controversial song, Cop Killer, a song intended as a narrative from the view of criminals getting revenge on racist police officers. However, the song generated a lot of controversy and was labelled as a song which was encouraging people to kill police officers.

What is Ice T’s net worth?

Even though Ice T is a big time rapper, he has been very influential in the field of heavy metal as well. For the film, ‘Judgment Night’, he collaborated with legendary California thrash metal band, Slayer and in 1995, he guest performed on the track Forbidden by Black Sabbath. He has achieved a lot of success through his hip hop albums and he has appeared in numerous movies and TV shows. As of 2020, Ice T’s net worth is around $40 Million.

Here are some of the highlights of Ice T’s career:

“Dealing with the old school rappers, you see a lot of humility. When you’re new, nothing is wrong. Everything is tight. Because you’re trying to hype the world into believing in you.”

Ice T is one of the most iconic rappers to come out of the 80s. It’s even more incredible that he has a revered metal band Body Count as well. Ice T has sold millions of albums and performed thousands of shows all across the globe. Ice T is also an accomplished actor who has had numerous film and Tv roles, the most notable being his role of Detective Sergeant Odafin Tutuola on law and Order: Special Victims Unit. As of 2020, Ice T’s net worth is around $40 Million.

19 Most influential people in history and present world