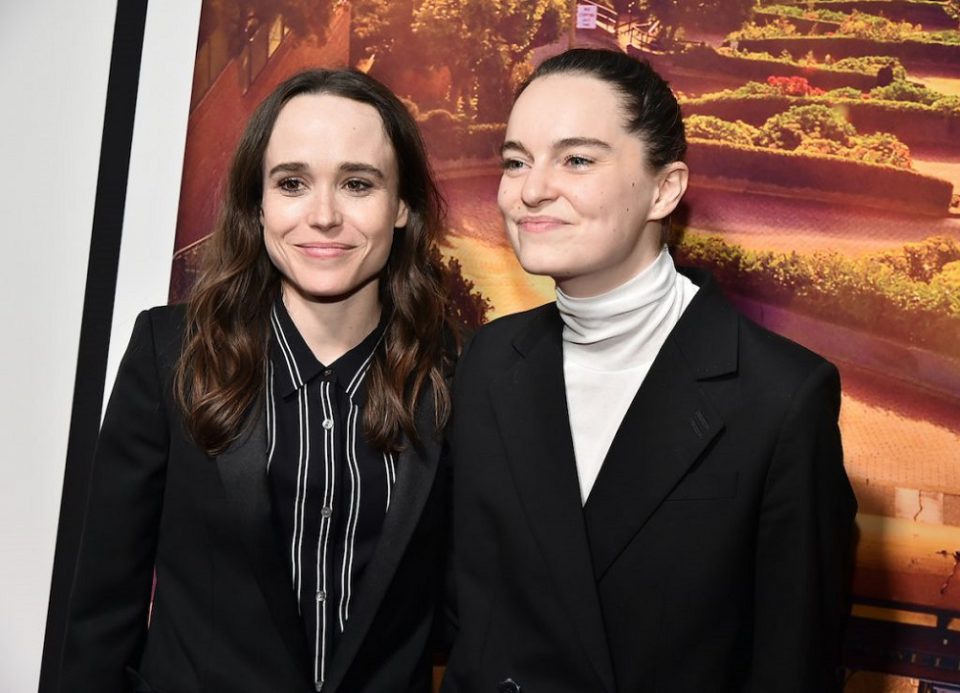 Elliot Page has reportedly filed for a divorce. The star allegedly filed legal documents seeking the disillusion of his marriage to dancer Emma Portner just 3 years after the two tied the knot. The news comes just 2 months after the 33 old actor came out to the world as transgender. The couple has also confirmed the news by issuing a joint statement, “After much thought and careful consideration, we have made the difficult decision to divorce following our separation last summer.”

We do not know whatever went wrong between the beautiful couple but this decision of theirs is definitely a bad news for all queer communities across the globe. Let’s take a look at Elliot Page’s life and her coming out story.

Elliot Page grew up in Nova, Scotia and landed her first her first film role ever at the tender age of ten. Several small roles followed in what Page’s family tried to make a normal childhood until everything changed in 2005. In 2005 Page appeared in the revenge thriller “Hard Candy”. Hollywood took notice and two years later she was the face of “Juno”, a film that earned the actor her first Oscar nomination. But as every good thing has a bad side, Juno also had consequences. A year after the film’s release, scores of 17 year olds around the US were getting pregnant in what the time magazine dubbed “The Juno effect”.

Feeling partly responsible and wholly uncomfortable, Page tried to disappear from Hollywood for a while. But when you are talented, that is a bit of a challenge and the actor later went on to secure a few life – changing roles. From X – men to Inception, Ellen Page was everywhere.

In 2014, Page publicly came out as gay during a speech at a human rights event. At the time she said, “I am tired of hiding and tired of lying by omission. I suffered for years because I was scared to be out……. And I am standing here today, with all of you, on the other side of all that pain.” And though she was on the other side of the pain, it did not hurt any less. Early last year, Page recalled the struggles she faced when first coming to terms with her sexuality. The actor admitted, “I was distinctly told, by the people in the industry when I started to become known: ‘People cannot know you are gay.’” And in order to keep up the charade she had to be someone inauthentic and hide her real self. For Page this was soul destroying. Not only did it mean being forced to maintain an image that was not real but it meant conforming to various pressures including what to wear and how to look. The actor elaborated that she was even forced to wear dresses and heels in photo shoots. But there was also an upside to embracing her sexuality and that was activism and speaking out for those who did not have her courage or her platform. In an interview with The Guardian, the actor elaborated that, “I have a responsibility to be out now, because I have these resources. I can access therapists and security and support.” This came after her sexuality was openly discussed in the media, a horrific time for the actor. She explained that she had been too afraid to be seen with a woman before she was 27 and this made her very depressed and very anxious.

Which is why Page jumped on every opportunity to activism, in 2015 she was involved in “gaycation”, a Michael Moore documentary which uncovered the stigmas against homosexuality and highlighted the very real dangers faced by the LGBTQIA+ community and it was an amazing experience. The actor explained, “Filming, I felt sadness and anger, but mixed with the most powerful inspiring moments of absolute joy, and gratitude, to be in presence of not only activists but individuals who are brave because they are themselves every day.”

Of course, just because Page was finding her way along her path, does not mean that she had support from every corner. There were still those who tried to break her down. She admits, “People are condescending. It has definitely affected how I have learned to express my opinion though. I have become more direct in a way that is really positive.” And Page has opened up about her past in Hollywood before she was out, when she felt close to breaking point. In 2017, she took to Facebook to report on harassment that she would experience at work, when she was 18 working on X – men, director Brett Ratner crudely commented on her sexuality and basically outed Page with vitril and malice. She later admitted, “I was a young adult who had not yet come out to myself. I felt violated when this happened. Ratner’s comment replayed in my mind many times over the years as I encountered homophobia.” Thankfully, she has learned to use the experience to bring about change and acceptance, Page explains, “What changed was the realisation how much crazy shit happened that was so normalised. And I internalised it. It is disturbing. I am learning to worry less about what people think, and not to be afraid to say the truth.” And embracing her sexuality has literally changed Page’s life.

Last month, the actress Ellen Page posted and open letter on twitter that shook the internet. It started, “Hi friends. I want to share with you that I am trans, my pronouns are he/they and my name is Elliot……”

This letter was an ode to honesty and a heartfelt declaration. But most impressively it is a promise that Page will be his authentic self and that he will continue to work towards making the world a better and more accepting place for the LGBTQIA+ community. In the statement, Page explains, “I love that I am trans. And I love that I am queer….. To all trans people who deal with harassment, self – loathing and the threat of violence every day: I see you, I love you and I will do everything I can to change this world for the better.”

Page has found silver linings, a lot of love and an epic transformation. Despite being linked to various male and female partners over the years including Alexander Skarsgard and Shailene Woodley. Page found love in the form of Emma Portner, a Canadian dancer and choreographer who the actor first spotted on instagram and later they met officially at set of The Umbrella Academy. Portner was hired to choreograph a dance sequence and despite only being 26, Portner’s resume is as impressive as Page’s. Not only she has helped with choreography for Justin Bieber’s world tours but she is the youngest ever choreographer behind a west end production. But the best thing about her is that she is gaga for page. In an interview with People, Portner admitted that the attention she and her partner received “is quite crazy. But if anything, I am happy for it. We try to hold hands in public. I try to join her at movie premieres. If we were a straight couple, I do not think we would push it so much. But it is a chance for queerness to be out in the open.” The two married in a secret ceremony in early 2018 and it has been a total love fest since then up until now.

Can CBD Make A Difference In Your Life?

5 Top Clinics to Get a Tummy Tuck in Turkey

Bradley Cooper Battle with Addiction and Path to Sobriety