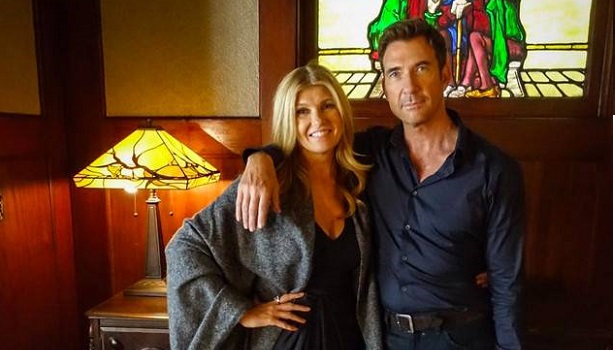 The pics of American Horror Story, directed and written by Ryan Murphy was shared in snapshots little by little stating what can be expected form his upcoming Murder house crossover/Upcoming horror sequence. There might be scenes full of evil and scariness in the season of American Horror Story: Apocalypse according to the recent updates.
While Connie Briton and Dylan McDermott were seen together in front of a stained-glass window, a passer-by acclaimed, “Connie and Dylan. The Harmon’s in their forever AHS home…Murder House.”
Return of Harmon is not the first update we have received from American Horror Story abode. Even Murphy shared pictures of other three women in American Horror home: The Coven. The picture of Steve Nicks, Sarah Paulson and Lily Rabe was even captioned by Murphy. She said, “The Return. Cordelia, Stevie and Misty catching a bewitching spell.”
Although these snapshots provide us with some hints about what can be expected from the series, American Horror Story, there are many more secrets hidden under key and lock that needs to be uncovered. Jessica Lange is also expected to make an appearance in one of the episodes that will be directed by Paulson. 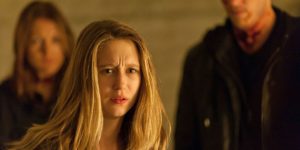 Notable American Horror Story alumni are returning for the series including Kathy Bates, Evan Peters, Emma Roberts, Gabourey Sidibe, Billie Lourd and Cheyenne Jackson along with many others. After all, this new season of American Horror Story will not become proper without demonic spirits prowling about.
Britton and McDermott have already appeared together in the first season, Murder where they played the role of husband and wife who moves to a haunted house with their only daughter Violet played by Taissa Farmiga. The actors have confirmed their return themselves for the new series of Apocalypse.  McDermott who played a different character in the Season 2, Asylum, will be seen this season also while Britton appeared only in season 1.
In one of the shows, the Executive producer of Apocalypse, Alexis Martin Woodall acclaimed that the title for this season will be assured according to the face value,
“The story begins with the end of the world, and then our world begins,”.

Movies Based On True Stories: 60 Of The Best!