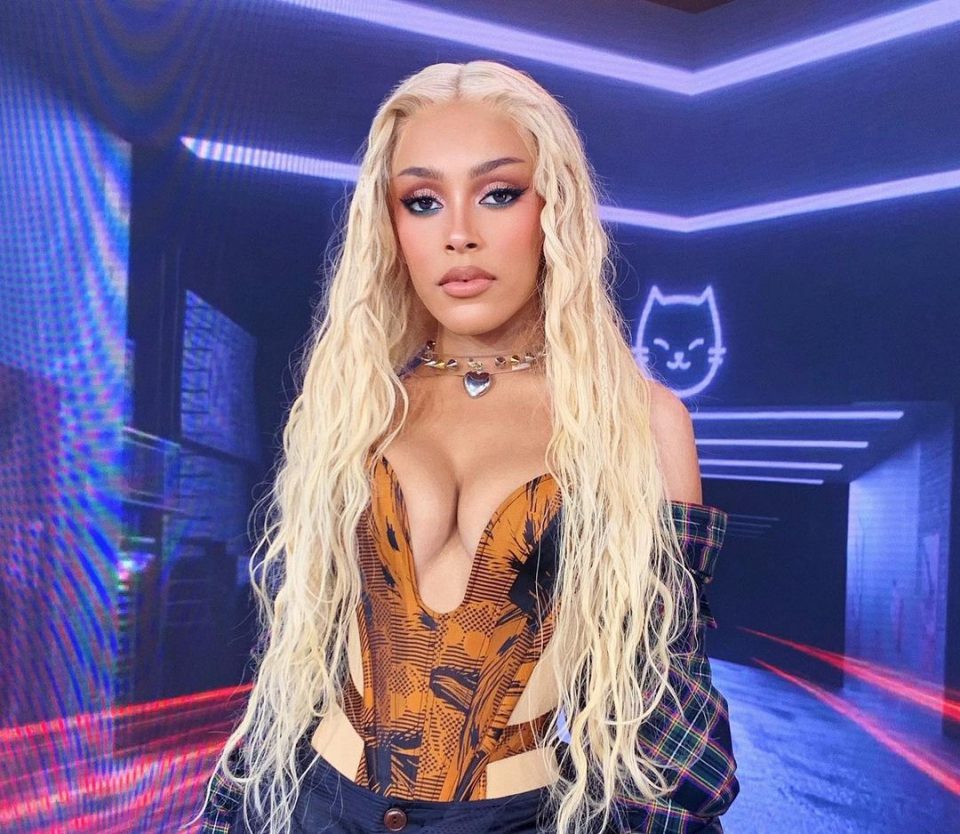 Singer and rapper, Doja Cat, first gained significant fame when the music video for her 2018 song “Mooo!” led to numerous viral internet memes across the web. The now 25-year old’s second studio album “Hot Pink” landed on the top ten on the US Billboard 200 in 2019 and featured the hit song “Say So.” The songwriter has probably been on your radar for a while now thanks to her mainstream success and making one viral hit after another in her eclectic outfits, red wigs, blonde wigs, watermelon fetish outfits, and CGI cat faces. Here’s her journey from being a teen to, starting her career in 2013, and how she went from ‘Mooo!’ to “Meow”:

So if you’re wondering how to name Doja Cat came to be, the singer explained to Dazed that her name choice came from her one of cats and weed. Doja explained that: “I was heavily addicted to weed and weed culture, so when I began rapping I thought of the word ‘doja’ and how it sounds like a girl’s name.”

2. Her Music Influences Include Drake and Badu:

After shifting from New York to Los Angeles as a school dropout, Doja Cat sampled artists of the time and featured their popular music on her own SoundCloud demos.

“My mom was kinda a hip-hop head, really ironic because like — I’m Jewish, my grandma’s Jewish, she’s white, and she was never exposed to music like that until she started meeting people and was like, wow I really love this,” Doja Cat said on Youtube.

“Once she had me, she would play a lot of Erykah Badu, a lot of Fugees, and Jamiroquai and Seal, Earth, Wind, & Fire, Alice Coltrane, John Coltrane, a lot of stuff like that…”

As you can see, some of the artists she has cited as inspirational are Drake, Nicki Minaj, Pharell, and Erykah Badu, all of whom may have been influential in her open nature and sexually explicit songs.

3. Did You Know That Doja Was On the Empire Soundtrack?

Before her first ever viral video “Mooo!” Doja was known for something else. For instance, she was on Empire’s first season, episode three.

4. What Is Doja Cat’s Favorite Meme?

This Queen of social media memes gained fame from her meme/music video hybrid “Mooo!” but she tells Crackmagazine her favorite internet meme is :  “it’s an avocaaado!”

Clearly Doja is someone who gets social media and her digital presence is already full of meme references, which gives her the ultimate upper hand when it comes to her young fanbase.

5. Her Song Moo Was Written In One Day:

Speaking of her meme love, the song Moo was inspired by a cow print tour outfit.

But what’s more shocking than ever is the fact that Doja made the song “Mooo!” in less than a day. It went viral in August 2018, featuring lyrics like “Bitch, I’m a cow / I’m not a cat / I don’t say meow.”

6. She Gained More Fame On Tiktok:

Amala Ratna Zandile Dlamini also known as Doja Cat’s song “Candy” set off the “Sweet Spot” viral dance on TikTok. This song was performed by stars on the app pulling in big names like Charli D’Amelio, the Lopez Brothers and Addison Rae. Soon, Doja Cat was one of the most viewed artists on the TikTok app in 2020.

A grateful Doja once featured TikToker yodelinghaley, who originally helped her “Say So” song go viral on the app, with a dance routine in her official music video of her hit song.

Doja’s father is a South African actor and producer who danced as well.

While she has said to several outlets, including The Los Angeles Times, that he was not a part of her childhood, his heritage was something she picked up on.

A young Doja would sample other genres of music to create something entirely new, and would say: “Yeah, this album [Hot Pink] is a lot more African influenced….. “I can sample Blink-182 but put an African vocal sample in there. The whole song feels like you’re in a tropical forest.”

8. She Is Half Jewish, Half South African:

Doja is half South-African and half Jewish as her mother is Deborah Elizabeth Sawyer ( a Jewish lady).

Amala Ratna or Doja Cat’s father Dumisani Dlamini used to be a South African actor, composer, and film producer. As her dad wasn’t very present growing up, her mom raised her as a single mom and they lived in Rye, NY, and at an ashram in Sherman Oaks, CA. She also lived with her brother who’s rapping inspired her own writing and rapping. As her fame grew, Doja’s dad now comments on her Instagram posts, to which she says, “I don’t hold grudges against him or anything in any way, but obviously it’s a little weird.”

The Californian rapper was featured on the Birds of Prey soundtrack (a film that starred, among others, Black Jewish actress Jurnee Smollett-Bell).

Doja Cat decided that high school wasn’t for her and left in 11th grade to follow her gut and take up music.

The young artist started in a slow manner and began recording songs on GarageBand and posted them on SoundCloud. (Her SoundCloud account by the name of amalaofficial, is still live.) Her debut single, “So High,” was released on SoundCloud in 2013 and then re-released as a single once she signed to a label.

She dated fellow singer Johnny Utah from 2019 to 2020. The Californian rapper confirmed that she had split from musician Johnny Utah in an Instagram Live video. The video was taken in Feb 2020.

The musical couple started dating in 2019 and the break up appears to have been mutual and amicable. “Everything is ok. I unfollowed my ex-boyfriend and everything is ok. We have been cool,” she said on Instagram Live. “Nothing weird going on. No drama, or weird shit going on. Shit just didn’t work out.”

In 2018, right after “Mooo!”, people on the internet went digging and found old tweets of hers that had homophobic slurs. Doja Cat initially doubled down but then did the right thing formally apologized, writing, “I’ve used horrible derogatory and hateful words towards people out of ignorance. I just want you guys to know that you’re incredibly special and I hold you dearly to my heart. I’m sorry for anyone I’ve offended or hurt deeply. You all are worth love and support.”

13. Prior To Music, She Tried Her Luck With Dancing:

“My mom was a painter and loves to sing behind closed doors. My father is a South African actor who danced in Broadway musicals for Lion King. I took a little bit of everything from both of them,” she stated to one magazine.

As her dad was musically gifted and was known for performing on Broadway for the Lion King, Doja tried to copy her dad and even tried her hand at break dancing at a young age.

At around age 11, she took up organized break dancing and danced in a crew in Los Angeles. She also went to surf camp growing up.

Doja told Dazed, “I danced in a crew and competed around Los Angeles in organized underground cypher/battles.”

Never having worked behind a counter or taking an office job, or selling things on the streets, Doja has escaped the “typical job” experience most young people have while in school.

The singer and rapper left school at an early age and got incredibly lucky when she made demos for GarageBand and SoundCloud and eventually got the traction she needed to garner a fanbase for her songwriting and sampling work. Her writing process happens best at night, according to an interview she gave to The Fader.

Although she hasn’t gone into detail for why the 25-year-old Cali rapper told Crack that she wants a partner with a big nose.

16. Her Favorite Feeling Is When Her “Pants Fit Just Right”:

Who cannot relate to this feeling, right?

The singer is extremely open on social media, posting a series of sexy pictures and give-no-f*cks stories. Her openness with her body in photos may be a bit intimidating when projecting to over 9.3 million subscribers. However, she told Crack, “I struggle a lot because I have a really fat ass and nothing else on my body matches it. It’s like I’ve stolen someone else’s lower half. If I find pants that hug everything and act as Spanx, nobody can f*ck with me, I’m on top of the world.”

17. Her Fashion and Music Aesthetic Is ’90s Inspired:

Doja Cat has mastered Instagram with her 9.3 million followers attesting to her

’90s-inspired outfits and a hip-hop Barbie aesthetic. She fills her interesting feed with many hair colors and styles, but the two constants are her true-to-self vibe and gorgeous shots.

The evolution of Doja Cat’s Instagram has changed since the rise of her success but when she is posing at home for a late-night selfie or while on tour, Doja Cat’s Instagram is always bad-ass with a touch of nostalgia. For example, on her Instagram feed, you’ll see quite a lot of neon and bodysuits.

What makes her nostalgic is “rain and 90s cartoons,” she told Crack. This is interesting because her song “Tia Tamera,” could be single inspired by Sister, Sister, a popular 90s tv show.

Are Doja Cat and Saweetie related?

African-American music artists Doja Cat and Saweetie aren’t related, but they do have a song together called ‘Best Friends’ which can be confusing to some, but they are not related.

How old is Doja Cat?

How tall is Doja Cat?

What is Doja Cat’s ethnicity?

Doja Cat is biracial; her father is Black and her mother is Caucasian. The “Say So” and “Juicy” song writer’s dad is Dumisani Dlamini.

The singer, rapper, songwriter, and record producer’s dad is South African, while her mother, Deborah Elizabeth Sawyer, is Jewish-American.

Who is Doja Cat dating?

Doja Cat is currently thought to be single. She dated musician Johnny Utah from 2019 before their split at the beginning of 2020. In October 2020, she was romantically linked to fellow rapper French Montana, which Doja later denied

What is Doja Cat’s real name?

What is Doja Cat’s net worth?

The “Rules” and “Juicy” singers estimated net worth is somewhere around $4 million. This number has probably increased.

Does Doja Cat have kids?

Doja Cat does not have any children.

Doja Cat is half South African as her father is the South African actor Dumisani Dlamini, and the other half of her ethnicity is Jewish as her mother is Deborah Elizabeth Sawyer, is a Jewish-American artist.

Where is Doja Cat from? Is she American?

Doja Cat is American. The Californian rapper known for songs like “Say So” and “Juicy” was born and raised in Los Angeles, California.