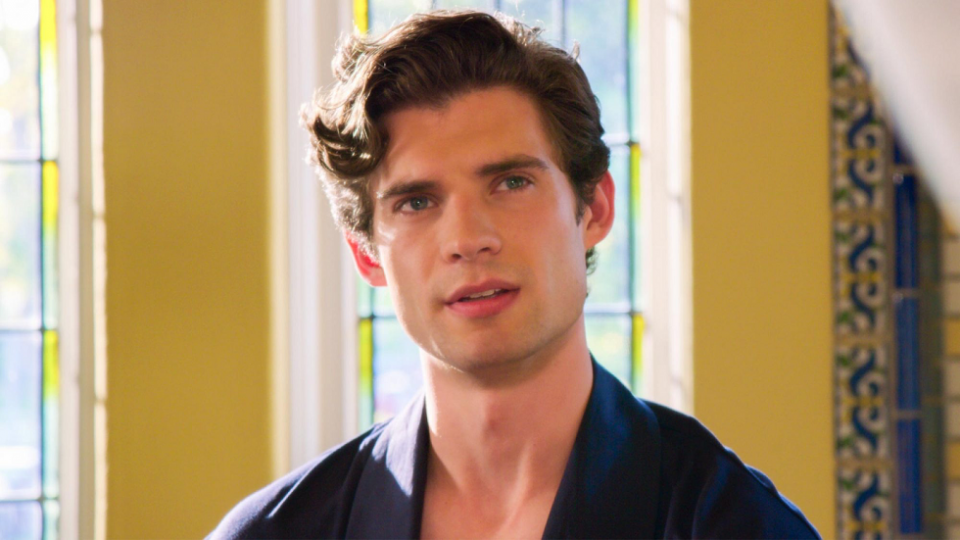 1. Who is ‘Hollywood’ star David Corenswet?

2. His original script for “Hollywood” was edgier:

According to an interview with Variety, David said:

“A little edgier is putting it way mild. I don’t know if this is appropriate, but I mean, it was like soft-to-medium-core porn. It was very explicit and very descriptive. There were pages and pages just describing the sex and the intimate encounters. There were some things that you just knew, reading it, that were not going to show up on the screen. It’s like, “That’s not what we do on television.” And you could understand the point of that is more to describe for the actors what the characters are experiencing, but with Netflix and Ryan, you never know because there aren’t any rules.

Now, in the first conversation, Ryan said, “I want to do it tastefully.” In reading it, the reason I wasn’t immediately turned off — no pun intended — by the whole thing was one of the points of the show was to take these glamorous icons and show those people having all the base instincts and fantasies and cravings and kinks that anybody has in any era.

He even thought to himself: “I don’t know if I can do this…”

Every scene I read, I wonder whether I can do it. I have no idea where I’m going to be able to do it until I show up on the day. But as far as the sex stuff, the scene where Jack gets introduced to the world and turns his first trick, in the finished product, that’s a beautiful sex scene with Patti LuPone. Much more about sex, it’s about the two characters and these lonely people who happened to find each other.

I’m not sure if I’m supposed to be saying this, but it was originally a scene between my character and the Duke and Duchess of Windsor — who are featured in the book by Scotty Bowers. And it was lifted from a scene that may well have taken place and that definitely went a bit farther and had less to do with the characters and had more to do with just the fun salaciousness of the activities. When I read it, I thought that would be a really big challenge”.

3. He went to Juilliard to study acting:

In a 2019 interview with Suburban Life Philadelphia, the 27-year old now successful actor revealed that he always knew he wanted to be an actor, but wasn’t sure how to go about it.

“Although I knew I loved theater, I knew almost nothing about making a life out of it, so I applied to UPenn and planned to study psychology,” Corenswet said. “But after doing a student production of the play Rope, I decided I’d roll the dice and audition for the drama division at Juilliard.”

The actor said that his initial audition journey at Julliard really opened his eyes and made him feel at home despite the fact that he was still a freshman at the University of Pennsylvania.

“It’s a hell of an experience, the audition weekend,” he said. “I was floored to see a bunch of kids as eager as I was to figure out what ‘acting’ really meant. It felt like my tribe. By the skin of my teeth, I graduated in 2016.”

4. Who is David Corenswet dating?

A quick scan of David’s social media accounts lets you know that the Hollywood hunk is either single or has a very private love life. Yes, David Corenswet keeps his romantic relationships out of the public eye as the Pennsylvania native has not discussed his love life in interviews, on the red carpet, or on social media. So, at this point, it’s unclear if he’s dating anyone.

David Corenswet has a clear love for animals because his Instagram page is filled with adorable shots of cats and dogs. The now 27-year-old actor also posts plenty of pictures with his family especially his sister Amy, and it seems like the two siblings are really close.

However, he loves his puppies a lot as in his interview with Suburban Life Philadelphia, when asked what his hopes for the future were, the actor made his passion for pups pretty clear.

“Gosh, I hope I end up with a dog,” he said. “A big dog. Maybe one big dog for wrestling, and one travel-sized dog for long flights.”

5. He was offered “Hollywood” and didn’t have to audition for it:

“It was an offer. I think it was the first role that I was ever offered without an audition, which is awesome”.

6. When asked about the comparisons between “Hollywood” and “Once Upon a Time in Hollywood”, he said:

“The obvious parallel is that they’re both historical fiction. And with all historical fiction, you have two options: You either take some characters and play them out through history, or you take a little detour and change history and imagine something else happened”.

7. This is his worst audition story:

“Alexa L. Fogel, veteran New York casting director, was casting “The Deuce.” I was auditioning for a bartender in the first season, and I was really excited about it. It was a great little scene, and I came in really prepared — except I didn’t have my slides because at the time in New York, I didn’t have a printer”.

“I was very off-book, but at the end of the scene, I screwed up one line and then that just totally knocked me off my feet. I kept doing the scene over and over again, and would just stumble over lines here and there until finally Alexa had to ask me if I wanted to step out of the room for a minute…..I did, and I stepped back in and did OK. I actually got a call back for that role. And then Alexa ended up casting me in “The Politician.”

8. Here is how he prepared for “Hollywood”:

“Just watching old movies, basically. The cool thing about the character — the easy thing, the thing that sort of lets you off the hook — is he doesn’t know anything. He’s been in the war. I had, in my time as a student, done a good amount of research about World War II. I talked to my grandfather, who fought in World War II. So I had a good backdrop of the European theater, which was Jack’s only history”,

“I re-watched “Singing in the Rain” and the Fred Astaire and Ginger Rogers movies and the old movie musicals, “Guys and Dolls,” that kind of thing. I watched some of the movies that I had wanted to see that I hadn’t — some classic Brando movies and James Dean movies. I re-watched “A Rebel Without a Cause,” because I was kind of hoping that Jack would be a bad boy in the end. It’s such a strange movie. Elia Kazan was doing interesting stuff with “East of Eden,” another weird one. So it was fun to watch those classics and have sort of mixed feelings”.

9. When asked the timing of his and Patti’s first sex scene together, he said:

“It was pretty early on. It’s funny. People ask, “How well did we know each other when we shot that scene?” We knew each other pretty well, because the week before, we had shot the scene from episode two, where there is no dialogue. I’m just, well, railing her on the bannister, on the stairs up to her cage of Oscars. So we had broken the ice at that point. It was somewhat tame, actually, then going to do this luxurious, three-page dialogue scene”.

10. What other movies has David Corenswet been in?

The Politician isn’t the first time the 27-year-olds appeared in a political project. David played the role of Michael Lawson, a D.C. aide who will stop at nothing to take part in his senator’s White House campaign. David starred alongside Thora Birch and Adrian Grenier.

11. What other TV shows has David Corenswet been in?

David portrayed the role of Claire Underwood’s college sweetheart Reed in season 6 episode ‘Chapter 72’ (pictured). He also featured in one episode of CBS’ ‘Instinct’ and on an episode of ‘Elementary’.

12. There are rumours that he could be the next Superman:

After rumours that JJ Abrams was set to recast Henry Cavill with a younger actor in Superman, David jumped at the chance to throw his name in the ring. Taking in an interview about his likeness to Cavill, Corenswet admitted to EW that one of his ambitions was to play the superhero: “My pie-in-the-sky ambition is definitely to play Superman.”

Corenswet was raised in Philadelphia, Pennsylvania.

His father, John Corenswet, was from a prominent Jewish family in New Orleans,  and worked as a stage actor in New York City for many years before becoming a lawyer; his mother, Caroline Packard, is a lawyer who specializes in nonprofit organizational conflict resolution; his sister, Amy Packard Corenswet, is a 2020 graduate of the University of Pennsylvania Law School.

Corenswet’s maternal grandfather is Edward Packard, the founder of the Choose Your Own Adventure book concept and author of more than 50 books in the series.

Most interestingly, his maternal grandmother was a prominent Quaker activist.

14. How old is David Corenswet?

15. How tall is David Corenswet?

From watching the actor in the TV show “Hollywood”, you’ll clearly see that he cuts quite a tall figure. According to David’s IMDb page, the actor is 6ft 4 inches which is around 193cm, if you wanted it in centimetres – yep, he’s quite a tall hunk!

16. Where is David Corenswet from?

Nop, “Hollywood” actor David Corenswet and “Superman” actor Henry Cavill aren’t related despite many fans constantly comparing the two actors. The rumours reach their absolute peak when a fan art of David went viral of him dressed up as Superman – could this be why he is rumoured to be the next Superman? Who knows!

18. What is David Corenswet’s net worth?

Despite only starring in a handful of shows, it is widely reported that 27-year-old David has amassed around $500k during his career thus far.

Follow the “Hollywood” actor David Corenswet on a number of different social media platforms – On Instagram you can follow him at @davidcorenswet where you’ll find pictures of his latest photoshoots, snaps with his pets and glimpses at his previous film projects

You can also follow David on Twitter here: @corenswet however you won’t be able to find him on TikTok just yet.

Corenswet wrote the screenplay for and acted in Following Chase (2011), directed by Greg Koorhan and from 2014 to 2016, he co-wrote, produced, and starred in a two-season sketch-comedy web series called “Moe & Jerryweather” on Youtube.

What are the Most Popular Types of Online Gambling Games? [Case Study]