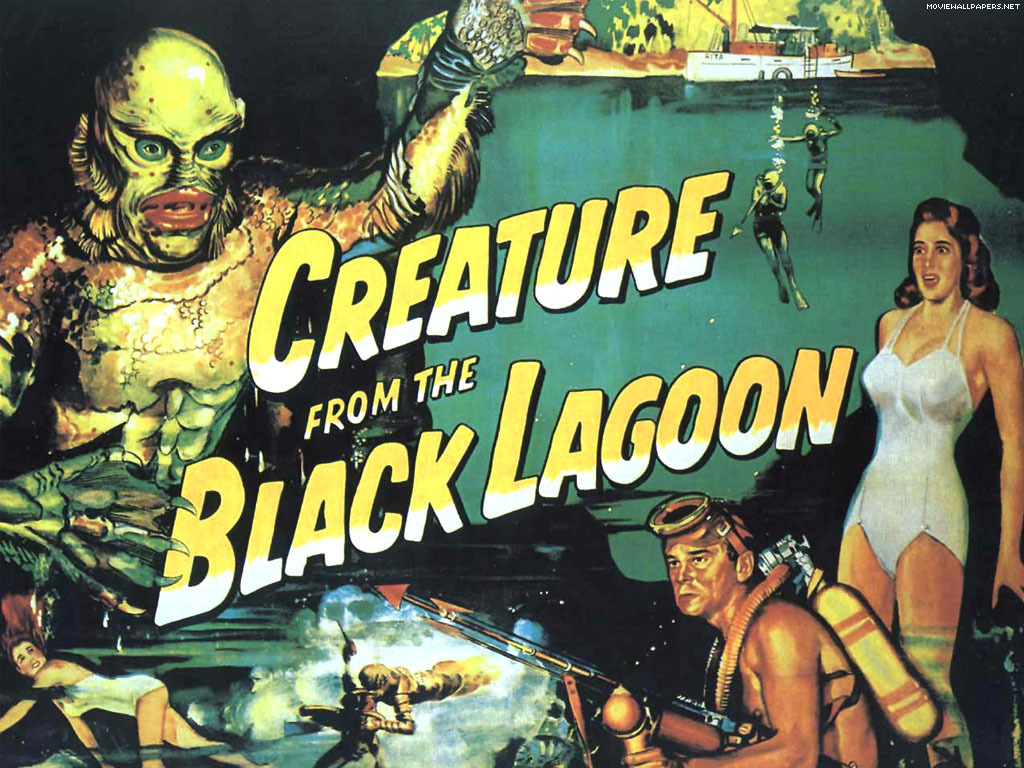 What is the Creature From the Black Lagoon?

Gill-Man, or the Creature from the Black Lagoon is essentially a living fossil. A creature from a bygone era, the last of his species from a time when giant amphibians ruled the Earth, the Devonian age. The Creature from the Black Lagoon is a semi-aquatic humanoid, with the ability to breathe underwater as well as on land. Physiologically, he is predominantly built for water as he has webbed feet and hands and only came on land because of human interaction. On his webbed fingers, he has claws and like his name suggests, he has gills for breathing. However, he also has lungs as he has shown the ability to breathe on the surface as well. He has a thick, resilient, hide like structure, with what seems to be plates or scales running along his body. Gill-Man’s hide is incredibly tough and it can easily withstand gunshots. He can also heal and regenerate at a rapid rate upon suffering an injury.

Where does the Creature from the Black Lagoon live?

The Creature from the Black Lagoon, as the name suggests, lives in a dark and murky lagoon in the Amazon rain forest of South America. The wet and damp environment of that region won’t be much dissimilar to the actual climate of earth which his species developed in. Due to this, the Creature has a natural aversion to strong sources of light, opting to stay away from them for as much as possible. Due to its natural habitat and strong aquatic abilities, the Creature is an adept dam builder. He can build large structures very fast, locking boats in certain areas and essentially trapping them, so he may ambush those onboard.

What does the Creature from the Black Lagoon want?

The end goal of the Creature from the Black Lagoon isn’t entirely clear. Every time he has appeared on screen, he has kidnapped women. The reason behind the kidnappings isn’t exclusively stated but it’s highly likely that he is looking to mate to further his species’ existence. But again, this isn’t entirely clear and biologically speaking, cross breeding is unlikely to yield successful results. So there is a potential that the creature simply wants company and thwart off loneliness since he seems to be the only remaining survivor of his species. This deduction based on the fact that he was stumbled upon in the Amazon rain forest and didn’t intentionally seek out human females to mate with.

The Creature from the Black Lagoon is an interesting creature, with his superhuman strength and durability, along with his bizarre end goal of capturing women. He truly is a creature from a bygone age. He is a fan favourite and has appeared in numerous films over the years. He was set to appear in Universal Pictures‘ planned Dark Universe. However, the commercial and critical failure of 2018’s The Mummy put an end to that. However, there is one filmmaker who is obsessed with the Creature from the Black Lagoon, Mexican Guillermo Del Toro, and he has indirectly used the Gill-Man as an inspiration for two important characters in his movies Hellboy and Shape of Water. Let’s take a closer look at the Gill-Man’s cinema history and how it has followed Guillermo Del Toro’s career.

Who designed the Creature from the Black Lagoon?

The 1954 classic film, Creature From The Black Lagoon was inspired by the myth about a race of fish-men that lived in the Amazon river, along with a strong influence of Beauty and the Beast. Disney illustrator Milicent Patrick designed the Gill-Man even though she never received credit for it because the studio didn’t want the world to know that a woman had designed such a terrifying sea creature. Patrick based her design on 17th century woodcuts of a fantastical fish called the Sea Monk. Originally, the creature was supposed to have a slimy smooth appearance in the vein of an electric eel but the final iteration was more bumpy and scaly. The costume itself cost $15,000 in 1954 and was made from airtight latex (so it was basically a giant scaly condom). It was extremely hot and impossible to sit down in. So between takes, the performer had to rest in a lake on the studio backlot.

Who played the Creature from the Black Lagoon?

When the movie was made in 1954, technology had progressed a lot from Universal’s early monster films like Frankenstein and Dracula , but the Creature of the Black Lagoon’s suit was extremely primitive by today’s standards. The actor who played the Creature from the Black Lagoon and squeezed into the suit, was Ben Chapman. The Creature’s suit had a squeeze bulb built into the arms to flutter the gills, a mouth that opened slightly when the performer inside tilted his head back, and eyes that didn’t move at all. The Gill-Man appeared in only three official Universal Pictures’ monster movies (Creature From The Black Lagoon, Revenge Of The Creature, The Creature Walks Among Us), but he left such a huge impression on everyone who saw him, that he quickly became one of cinema’s most famous monsters.

Where was the Creature from the Black Lagoon filmed?

The location on the screen was supposed to be a part of the Amazon rain forest. Many viewers observed that it looked a lot like some areas in Florida. However, the film was mainly shot in a Hollywood studio and the underwater scenes were shot in the Wakulla Springs State Park.

Who designed the poster for the Creature from the Black Lagoon?

The now iconic promotional poster of the movie was designed by Daniel Hagerman.

What is Guillermo Del Toro’s fascination with the Creature from the Black Lagoon?

As a young boy in Mexico, Guillermo Del Toro learned to speak English through Forest J. Ackerman’s legendary magazine ‘Famous Monsters of Filmland‘. The book installed a lifelong awe of cinematic creatures in the budding filmmaker and the Gill-Man or the Creature from the Black Lagoon had the biggest impact by far. As a kid, Del Toro was fascinated by the Gill-Man’s grace and beauty as he pursued his prey, but he couldn’t understand why he didn’t wind up with the girl at the end of the movie. He spent a lot of time drawing Gill-Man and his co-star Julie Adams, eating ice cream, having dinner and living together in wedded bliss. He’d eventually get a chance to give the Gill-Man a happy ending but first he had to turn his obsession with movie monsters, into a successful film making career.

In 1985, he founded a Mexican special effects company called Necropia and soon transitioned into directing his own films, starting with 1993’s Cronos. Del Toro’s filmography contains too many monsters to count, from giant kaijus to the petrifying Pale Man, but the monster closest to his heart, has always been the Gill-Man/Creature from the Black Lagoon. That’s one of the biggest reasons he jumped at the chance to direct the movie based on Mike Mignola’s comic book, Hellboy in 2004. His favourite character in that series was an intelligent fish-man called Abe Sapien who bore more than a slight resemblance to the Gill-Man.

After leaving Hellboy, Del Toro also had the opportunity to oversee Universal’s ‘Dark Universe’ project, which would’ve included an opportunity for the remake of the Creature from the Black Lagoon. Del Toro wanted to do the movie with the Gill-Man’s point of view but when Universal said no, he lost interest in the offer.

How to Handle Sexism in the Workplace