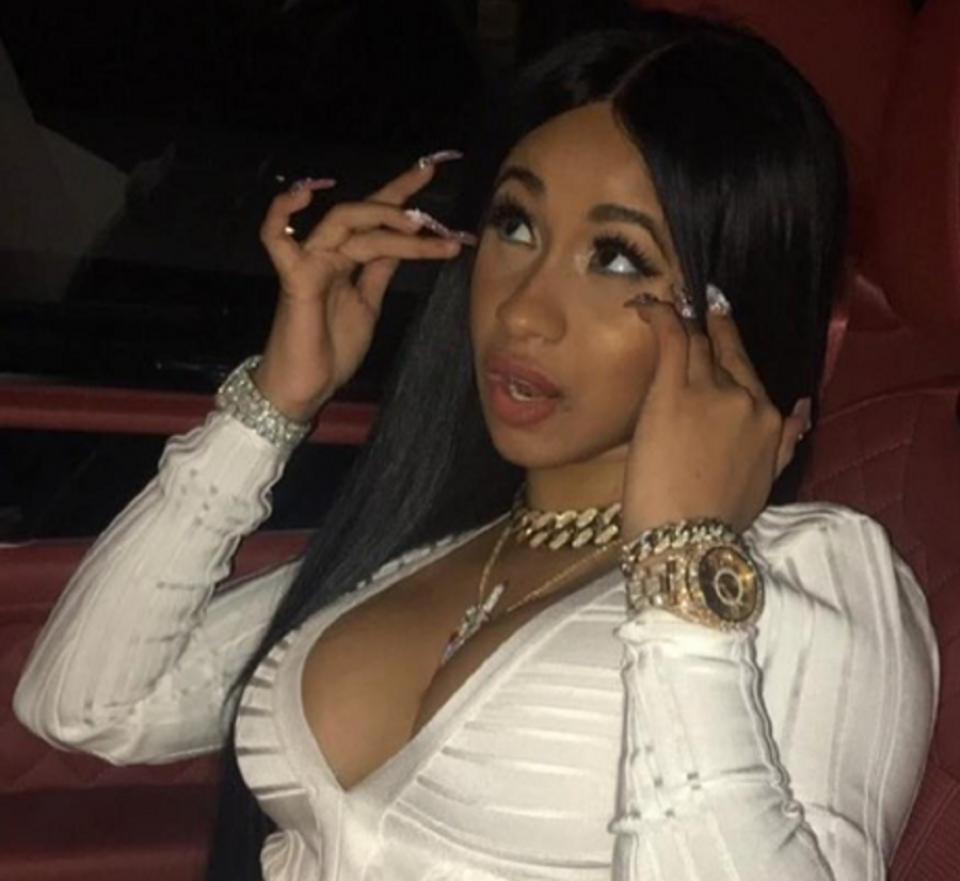 One of the most popular female rappers of today, Cardi B is a name that has been spoken by many. There’s a lot to know about this Afro-Latina who topped headlines, made us hurt from laughter, and flooded our Instagram feeds with honest and hysterical videos. Cardi B’s also been very vocal, baring it all for her followers when it comes to her political opinions and feuds with other female artists. But even if you’re her biggest fan, there’s still likely a lot you didn’t know about Cardi B. Here are 22 fun, interesting, crazy, and downright absurd facts about Cardi B you probably didn’t know until now.

22 Cardi B Facts You Probably Didn’t Read Yet!

1. Her Daughter Was Born Raising Her Middle Finger

Cardi’s baby girl, Kulture Kiari Cephus entered the world in July 2018 aptly! Like mother, like daughter they both make the world laugh. Cardi admitted the story on Twitter that little Kulture was ‘sticking out her middle finger’ when she was born. It looks like the apple doesn’t fall too far from the tree after all!

2. There’s a Reason Why Cardi Named Her Daughter ‘Kulture’

A lot of people wondered why Cardi and Offset named their baby girl, ‘Kulture’? The story goes that Offset’s trio, Migos, released an album with the exact same name back in 2017. They released Culture II in January 2018 so it made sense for the couple to name their daughter after Migos’ album. OKAY THEN…

When a sketch of the rapstress playing the role of Martin Luther King Jr’s wife, Coretta Scott King leaked, her daughter, Dr. Bernice King had something to say about it.

The TMZ clip which showed The WAP star back in the day saying “All the hussies wanna sleep with my husband, but it’s alright, ’cause I know he marches home to me,” led Dr. Bernice King to clap back and tweet (and eventually delete). She said:

“On the 55th anniversary of #IHaveADream,’ a clip on @TMZ depicts my parents (Cardi B playing my mom) & great women of the CRM in a repulsive, false light. They paid an extraordinary price so people of color can have a platform- & this is how you use it. @iamcardib: Let’s talk.” Ouch.

4. Her Stage Name Cardi B Comes From A Drink

Cardi B’s real name is Belcalis Almanzar, both of which are Spanish translations of Arabic words. But her stage name does not originate from this name either.

In an interview with tv host Jimmy Fallon, Cardi  had revealed that her name was the short form of the eponymous alcoholic beverage Bacardi.

“My sister’s name is Hennessy, so everybody used to be like ‘Bacardi’ to me,” she told Wendy Williams.

“Then I shortened it to Cardi B. The ‘B’ stands for whatever, depending on the day…beautiful or bully,” she added. “No one calls me Belcalis except for my family, my mother and my daddy.”

5. Cardi B Went Under The Knife For Plastic Surgery At 19

The rapper had admitted in the past that she got her first surgery done at the age of 19 in the hope that she would make money as a young dancer, according to harperbazaar.com.

The WAP singer had also opened up on how she suffered the “craziest pain ever” after getting buttock implants. “I felt like I was gonna pass out. I felt a little dizzy,” she was quoted as saying by GQ.

This fact about the rapper comes as quite a shock!

In a resurfaced Instagram live video, Cardi was admitting that she drugged and robbed a couple of fellas who wanted to have sex with her during her stripper days (sounding so similar to her movie with Jlo, Hustlers)

Despite the backlash, the Hustlers actress responded in a more recent video saying, “I did what I had to do to survive… I never claimed to be perfect or come from a perfect world… I’m not proud of it and feel a responsibility not to glorify it…I made the choices that I did at the time because I had very limited options.”

7. Cardi Once Broke a Guy’s Nose By Sitting on His Face

In one of her many outspoken videos, the rapper revealed that she once broke a guy’s nose by sitting on him during an ‘intimate session’ of stripping by putting her whole body weight on his head. They then had to rush the guy to the hospital and told the doctors that he got jumped instead of admitting to their rendezvous!

8. Her Engagement Ring Is Quite Expensive

9. She’s Famous For Her Nails

Cardi B’s talon or acrylic nails are very popular and with good reason: it takes three hours to get her nails ready! Her Japanese manicurist Jenny Bui had revealed in a 2018 video interview with wwd.com that it took nearly three hours to get to flex like the rapper.

10. Cardi B Makes Her Own Hair Masks

Cardi B  recently admitted that she makes her own hair masks with natural ingredients, according to Refinery29. “I just finished putting argan oil, and I’m gonna put mayonnaise, castor oil, and olive oil. I know it’s a lot of oil, but my baby’s hair needs to be really hydrated like mine,” she was quoted as saying.

In September 2020, the Bodac Star announced her divorce from her husband Offset. He is a member of rap group Migos alongside Quavo and Takeoff.

They later filed to dismiss the divorce, but going back the pair made their relationship public in 2017 and got married in September that year.

Prior to Offset, Cardi B dated a rapper not as well known called Tommy Geez but they split while Tommy was in prison serving a four-year sentence.

Cardi B is of mixed ethnicity.

Cardi B’s dad is of Dominican nationality, while Cardi B’s mum is of Trinidadian descent.

Growing up, a young Cardi was raised in Highbridge, a Latino-majority neighbourhood in the South Bronx which is in New York City. Her grandmother who she is close to has an apartment in Washington Heights. Cardi previously said that she had “real good parents” who had “regular, poor jobs”.

13. Cardi B Says Stripping Saved Her

Before rising to fame via Love & Hip Hop New York and ‘Bodak Yellow’, Cardi B sought a career as an exotic dancer at the age of 18. She was never shy about talking about it, even calling herself a “stripper hoe” and she also said that her mother threw her down the stairs (allegedly) when she found out what Cardi did for a living.

According to reports, she planned to retire from stripping at 25 but quit at 23 when she became a social media personality and finally had money to pay for an apartment.

After being fired as a cashier, stripping got her out of an abusive relationship, paid her debts off to college (that she never managed to finish) and funded for her expensive rent in New York City.

According to the website Celebrity Net Worth, the Hustlers actress and social media personality is worth $24 million, as of July 2020. Just looking at her rapping career, one Coachella performance helped her get paid $170,000 across both performances at the Coachella music festival in California. However, Cardi clarified (to SiriusXM’s Hip Hop Nation) that the fee was agreed six to nine months before the release of her debut album ‘Invasion Of Privacy’. She also claimed that she spent $300,000 of her own money on her set for Coachella.

This young entrepreneur later revealed in a recent interview that the mega-deal didn’t actually make her any profit but she sees it as an investment for her career. Cardi has also revealed that she would want at least $300,000 per show in order for her to leave her daughter. Kids come first, right?

One thing that definitely adds to her net worth is her own collaboration with the affordable shoe brand Steve Madden after becoming a Nova Babe.

16. She Denied Her Pregnancy

Cardi B officially revealed that she was pregnant during her post-album performance on Saturday Night Live in April 2018. Despite denying it in the past, the rapper showed her baby bump to the world.

In February 2018, rumours surfaced claiming that Cardi was 3-4 months pregnant, which Cardi claimed were false rumours. However, the following month, in March 2018, it was reported that Cardi B would welcome her first child with Migos rapper Offset in the first week of July 2018 – which she did! Despite being set to perform at Coachella in April just three months before, her pregnancy did not let that interfere with her performance.

There’s a reason why Cardi has such a distinct and cute New York accent. Her first language is actually Spanish!

She told GQ magazine that growing up in the Bronx with a poor Dominican father who only spoke to her in Spanish and a Trinidadian mother resulted in her “broken” or street English. As a matter of fact, the star revealed that her accent is a real “bad pet peeve” of hers.

18. The Feud With Azealia Banks Forced Her Off Instagram (Temporarily)

Azealia’s ongoing controversy with Cardi forced Cardi to be the bigger person and delete her social media account. Banks accused Cardi of being “a caricature of a black woman that can’t spell.”

The WAP singer then left this heartfelt response above before promptly deleting her Instagram account. She returned to social media in a flash though!

Cardi first stepped into the spotlight after becoming a social media personality thanks to the reality TV show, Love & Hip Hop. She survived two whole seasons before she quit the show to focus on her music.

20. Then She Went Even Higher With The Hit Single ‘Bodak Yellow’

Cardi B cemented her name with the catchy single ‘Bodak Yellow’, which was inspired by Kodak Black’s 2015 song ‘No Flockin’. Some fans think that Cardi ‘copied’ the song from the Atlanta rapper however Kodak has since taken to social media to suggest he earns money from Cardi’s hit single.

21. Cardi’s the Second Female Artist to Ever Top Billboard 100

22. In Terms Of Fashion, She’s a Front Row Queen

The WAP singer has even been named “New York Fashion Week’s Undisputed Front Row Queen” by US Vogue.

Common Hulu Problems and Its Fixes