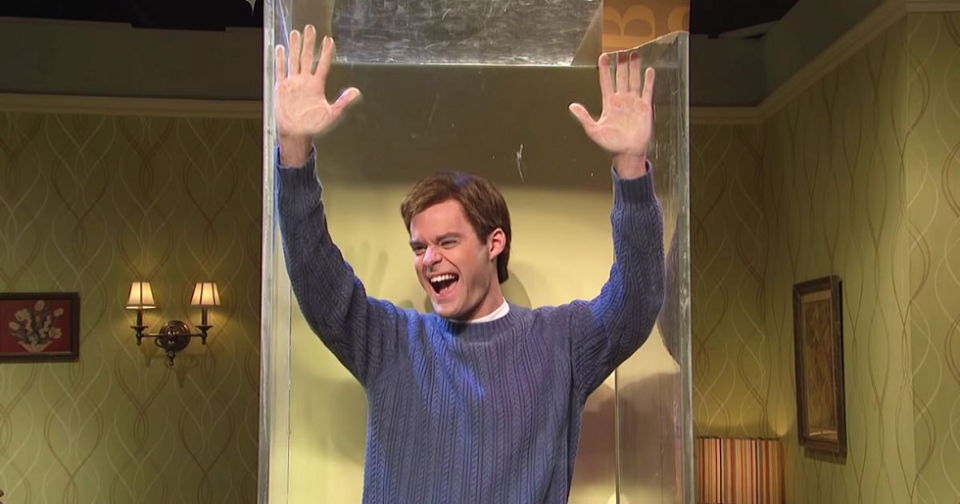 Throughout his career, Bill Hader has regaled audiences with his incredible acting chops and comedic timing. Even though he is a widely popular public figure, there are some facts about him that might surprise you.

Bill Hader is one of the most famous comedians in the world. He rose to fame during his time with Saturday Night Live (SNL) and he is widely considered to be one of the best cast members to ever appear on the show. Let’s check out some interesting, lesser known facts about Bill Hader.

When Bill Hader appeared on the popular TV show “Finding Your Roots”, he discovered that he had royal ancestors. Bill Hader found that he was a descendant of King Edward I of England and he is also a distant relative of King Charlemagne.

He worked as a ghost writer

Bill Hader helps write the hit animated show South Park. Hader has been in the writer’s room since season 13. Plus, he’s the brains behind the famous Kanye West fish sticks episode. He came up with the idea while on a writer’s retreat with South Park‘s infamous creators Trey Parker and Matt Stone.

He hated the grind of the production assistant’s job

Like most people who move to Hollywood to pursue a career in the film industry, Hader started at the bottom. He worked as a production assistant on several movies like Critical Mass, Collateral Damage and The Scorpion King. The last film made him quit the PA business for good. Hader cited the 18 hour work days and zero free time as the main reasons why.

He dropped out of college

Bill Hader is on the list of successful college dropouts. He spent some time at the Art Institute in Phoenix but when his dream couldn’t wait any longer, he officially dropped out. In 1999, the funnyman moved to Los Angeles. To help get settled before finding work, Hader used the college funds that his parents saved for him. At least he put the money to good use.

He appeared on SNL for eight seasons

Hader was initially hired as a featured player on SNL back in 2005. But it was obvious even from the beginning that he was going to be one of the show’s very best. By the next season he became a full time cast member. Hader starred in the show for eight seasons before calling it quits in 2013.

Bill Hader hosted SNL in his return to the show

Not long after leaving SNL as a cast member, Hader returned to host the show. When he hosted the sketch show for the second time in 2018, Hader got a nice surprise. The Emmys nominated him for Outstanding Guest Actor in a Comedy Series.

Surprisingly, Hader’s favorite sketch from his time on SNL didn’t involve a fellow comedian but instead a musician: Dave Grohl. The sketch in question revolves around a band—consisting of Hader, Grohl, Ashton Kutcher and Fred Armisen—reuniting at a wedding reception.

One of Hader’s most popular characters on SNL was Stefon, who is actually based on a barista that Hader came across at a coffee shop in New York. Part of Stefon’s appeal was in watching Hader struggle to keep it together. Hader’s laughter was genuine. SNL writer John Mulaney used to add new jokes to the cue cards during the show to intentionally try and make Hader laugh. It’s clear that he was successful on numerous occasions.

He worked for Playboy TV

One job Hader kept secret for a long time, specifically for his parent’s sake, involved working in the adult entertainment industry, but not in the way people may think.  He was a stage manager for a TV show on the Playboy network called Night Calls. His job description included bringing the hosts coffee and magazines and helping them prepare for scenes. According to Hader, “he quit after two or three shows, in an effort to avoid disappointing his parents.”

His initial days at SNL were tough

A job at SNL is a dream for most comedians. But according to Hader, the first few years were anything but fun. It took four years before he became comfortable performing on the show, with those first four years consisting of a lot of stress and no sleep. Hader used to stay awake for 48 hours and then have to perform in front of a live audience!

He got starstruck while meeting Bill Murray

Generally, when people meet celebrities, particularly ones they idolize, they want to cherish and remember that moment forever. Not so much with Bill Hader. When he met Bill Murray, Hader was so star struck that he couldn’t speak.

He was drawn to acting from a very young age

Bill Hader was born in Tulsa, Oklahoma on June 7, 1978. Hader was immediately drawn to movies as a kid and even made a few short films of his own while in high school. One of his first acting gigs was as the gentleman caller in the high school play The Glass Menagerie by Tennessee Williams.

Bill Hader has received 15 Emmy nominations, but only won the award twice. His first win was also his first nomination (he won Outstanding Animated Program for South Park, which he helped write). More recently, he won for Barry—which he also co-created.

His choice of comedy movies is a little different

Hader stood out in the book Poking a Dead Frog: Conversations With Today’s Top Comedy Writers. The actor provided a list of 200 movies that every comedy writer should see. The list helped label Hader a cinephile, but the main reason it had everyone talking was because of the high number of movies that aren’t usually classified as comedies. For example, Hader thinks Eyes Wide Shut is hilarious because it’s “a movie about how Tom Cruise can’t get laid.”

He doesn’t use social media

Although there are a ton of accounts on social media sites like Twitter and Instagram with the account name Bill Hader with a picture of the actor, don’t be fooled. These are all fake accounts. The closest Bill Hader came to joining any social media site was when he almost joined Twitter while promoting Trainwreck. But even then, he ultimately decided against it. Bill Hader prefers to maintain a certain degree of privacy in his life.

Hader claims that he only wanted to do two things while growing up in Tulsa: play sports or do nothing. He preferred nothing but his dad wanted him to play sports and sent him to football camp. It should go without saying that it wasn’t for him.

Although a career in comedy wasn’t always his main plan, Hader grew up a fan of the genre, citing Monty Python, Woody Allen and Mel Brooks as his inspirations. He especially took a liking to British comedy, specifically the movie Spinal Tap, which he saw as a kid and immediately thought, “that’s how you perform comedy.”

Unfortunately, after 11 years of marriage, the stress of SNL and the time apart eventually put too much of a strain on the relationship and they separated on July 31, 2017. The divorce was finalized after a year.

He is not a fan of Justin Bieber

Having spent nearly 10 years on SNL, Hader has seen quite a few celebrities host the show and musicians perform.  According to him, the worst guest ever was Justin Bieber back in 2013. Bieber played host and musical guest and was nearly impossible to deal with because of his attitude and the fact that he brought a 20-person entourage with him.

He is allergic to peanuts

Hader has a serious peanut allergy and even suffered a dangerous allergic reaction while on set of the movie The Skeleton Twins. Apparently, some people don’t know that peanut butter falls into the peanut category. A set assistant assured Hader that the chocolate didn’t contain peanuts, but when Hader bit into it and tasted peanut butter, the assistant replied, “Oh, you said peanuts.” He was immediately rushed to the hospital and treated.

Despite being severely allergic to peanuts, Bill Hader went on to voice Mr. Peanut in the commercials for Planters. Here’s a man who faces his fears.

He credits his career to Megan Mullaly

Bill Hader owes his career to actress and comedian Megan Mullally. She recommended Hader to Lorne Michaels and got him an audition for SNL. Hader used to perform improv in backyards with his group Animals from the Future, which also featured Matt Offerman, Nick Offerman’s brother. Mullally happened to be at one of those shows and thankfully saw Hader’s potential.

He is an accomplished voice actor

Hader has been credited as an actor in 38 movies throughout his career, but nearly half of them are voice work. From starring roles in movies like Cloudy with a Chance of Meatballs, all the way to strange roles like the computer for the USS Vengeance in Star Trek: Into Darkness and simply The Voice in Scott Pilgrim vs. The World, Hader’s voice dominates.